I’m going to try to avoid comparing μ’s to Aqours since that’s a sensitive topic. Instead, I’m just going to give a (verbose) rundown of what happens in each episode with commentary as necessary.

The two things that stood out to me so far is the amount of skipping around and passionate yells. Not that I’m complaining; I love it when VA go for these kinds of screams. As for the skipping around, it’s not out of control so it’s fine. I rather like in media res when it’s done right, to be honest..

I think I should probably start with a rudimentary character list. I didn’t get around to researching Aqours prior to watching episode one, so I’m sorry if my characterization of the girls are inaccurate.

Chika – energetic girl who is tired of being normal and having no interests. She has recently grown enamored over school idols.
You – Chika’s childhood friend. She is very supportive of Chika and tends to go along with her friend’s whims and passions. Is part of the the swim club.
Hanamaru – Ruby’s friend. Seems to have a bit of a dialect as well as a zura verbal tic. Was childhood friends with Yohane.
Ruby – Hanamaru’s friend. She’s really shy yet really interested in being a school idol.
Yoshiko – chunnibyou. Was childhood friends with Hanamaru. Calls herself Yohane and shuns her given name.
Dia – student council present. Has a short temper. Seems to be against the school having a School Idol club.  However, she does seem to know a little bit about Love Live! for some reason…
Kanan – friends with Chika and You (maybe they’re a trio of childhood friends). Is currently taking a break from school since her father is injured.
Ohara girl – I don’t know her given name. Outside sources say it’s Mari. Seems to be half Japanese due to her accent. Is rich enough to fly around in a helicopter.

The show opens with a student walking through the classroom door, leaving the main character, Chika, bedazzled.

The scene then abruptly jumps to Chika and her childhood friend, You, having a blast in Akiba. After a short scene involving a maid, flyers, and the wind, Chika finds herself standing in front of a signboard advertising Love Live! Cue the OP! It’s a catchy song, but I don’t think it particularly stands out. It also features some shipping material already (not even three minutes into the episode! Future prospects are looking strong) and preserves the photobombing tradition.

After the OP is finished, Chika and You are shown trying to recruit students to join their School Idol club to no avail. Then there’s a flashback to what I assume to be Chika’s house. Chika tries to pose, trips, and falls on her butt, which causes her mother and sister (?) to demonstrate their loving support. Thanks, fam.

Chika and You then almost miss the school bus. While riding said vehicle, Chika vocalizes her dream to be a school idol once again, having already drawn a poster for her cause. The show then jumps back to the aftermath of Chika and You’s failed recruitment drive.

The hapless pair, looking downcast over being ignored, then spot Hanamaru and Ruby, a likely source of yuri shiptease throughout this show. Chika being Chika, she tries to recruit the two. While Hanamaru seems rather indifferent, Ruby is very interested. Unfortunately, Chika is too aggressive with her recruiting approach, which causes Ruby to scream. Somehow this delightful sound knocked a girl, who was perched on top of a tree branch, down to the ground. Here comes Yohane, the most entertaining character of the episode! Unfortunately for Yohane, Hanamaru recognizes her as Yoshiko, her childhood friend. from kindergarten. Hanamaru confirms it with Rock-Paper-Scissors since Yoshiko has a funky way of showing scissors. Damn, Hanamaru, you still remember that after all these years? You must have really liked Yoshiko! 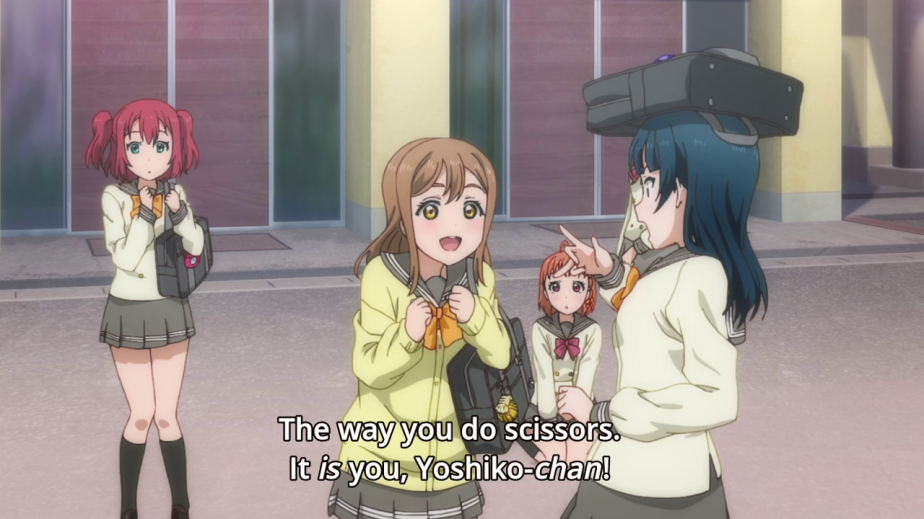 Chika and You then bump into Dia, the student council president. Dia seems to be really against the idea of a School Idol club, but to be fair, Chika still only has herself as a member (only a matter of time before she ropes in You, though). This means Chika is short 4 members since a club requires 5 members.

You and Chika then go to visit Kanan, who is currently taking a break from school since her father is injured. Gotta pay the bills somehow! It seems like her family is in the scuba diving business? I think Kanan does want to help Chika since she hesitates when Chika mentioned that she was going to become a school idol. Alas, Kanan ultimately gives the excuse that she’s a third-year while Chika and You are second-year students, with the implication being that they still have time to goof off.

The trio then hears a helicopter which is apparently owned by the Ohara family. For some reason Kanan gets quite emotional saying that, in my opinion. I wonder why? Turns out the person riding the helicopter is a blonde girl who is apparently half Japanese. I feel sorry for her seiyuu. This is her first VA role and she has to pretend she has a foreign accent. Chika and You then go their separate ways for the day. After Chika gets off the bus, she starts musing over how she can successfully form a School Idol club. While doing so, she notices a girl standing on a dock, staring off into the distance. Said girl then starts striping until she’s down to just a swimsuit and starts running towards the water (with a nice homage due to the spinning screen). Chika grabs said girl, claiming she’ll die because it’s April and thus the water is really cold. The girl resists, claiming she needs to go in there. The two then trip and fall into the water together. After surviving the cold dip, the two warm themselves with towels  by a fire. It turns out the girl is a pianist struggling to write a piece about the ocean, so she wanted to hear the sounds of the ocean. Upon mentioning that she comes from Tokyo, Chika asks her if she knows about school idol groups. Surprisingly, the girl has no idea since she has only been devoted to piano. Here Chika talks about μ’s at length while START:DASH plays. I still can’t get over that amazing song.

Chika also mentions that she’s never really had any interests growing up, but watching μ’s perform changed everything. Seeing these normal girls come together as one on stage in order to become shining stars really impressed Chika. She’s no longer content being normal and wants to be radiant just like her favorite idol group. The girl thanks Chika for her motivational story, which has encouraged her to try her best, and the two part ways after exchanging names.

The next day, Chika tells You she’s going to keep trying to form a school idol group. Since she’s such a good friend, You decides to truly support Chika and joins the club. 3 more members until they can actually be an official club!

Together they approach Dia, only to get shot down again. As a result, Chika and Dia both get really confrontational. Dia also reveals that she knows more about school idols than Chika, since she talks about Love Live, the idol contest, while mentioning that idol groups need to compose original songs in order to participate. Defeated, Chika and You make a strategic retreat to their classroom. Still thinking about how the student council president said that no one in the school would know how to compose as song, Chika pulls out a music book and declares she’ll do it herself. You says they would have graduated by the time she learns, to which Chika concedes. It’s a pinch! 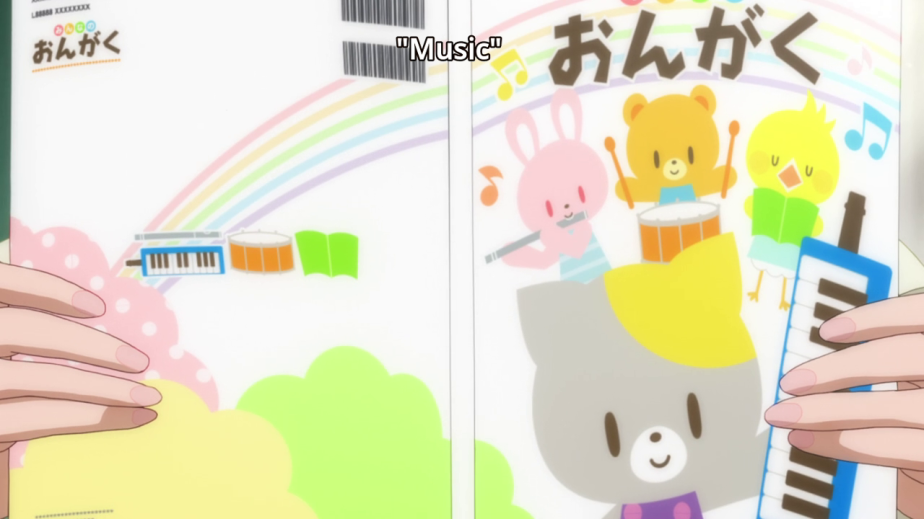 However, it just so happens that the teacher announces the arrival of a new transfer student right then and there. It turns out to be the girl Chika met the day before, Riko! Wait, didn’t she say she plays piano? And she used to attend Tokyo’s Otonokizaka High, μ’s alma mater? What a miracle! Then the ED rolls. I don’t have much to say about it besides the fact that it only features Chika, You, and Riko. My guess it’s a temporary ED (like in S1 of Love Live) until every member joins Aqours. They make a cute trio, though.

After the ED, Chika asks Riko if she wants to be a school idol together with her. The answer is obvious.

The next episode is titled “Catch the Transfer Student!” Seems like Chika is going to convince Riko to join by force. Tune in next time!