The episode in a nutshell:

After the OP is done, Aoba is thinking to herself about how unexpected it is for her to be working for the company in charge of Fairies Story 3. I guess she didn’t know the name of the company behind Fairies Story 1 and 2?

Anyways, she walks in on her role model, Yagami Kou, sleeping at the office without wearing any pants.

Aoba then introduces most of her co-workers and superiors in her head (and for the audience). Job descriptions are conveniently provided, as well as a nifty relationship chart in regards to work hierarchy and company structure. The genki girl, Shinoda Hajime, is the only one in the motions department, so she’s the odd girl out…

The scene then jumps to Aoba working to finish her textbook assignment when Mozuku the cat interrupts her. Aoba plays with Mozuku until the director, Shizuku, comes to fetch her pussy. Shizuku also makes another pass at Aoba!

Yun and Hajime invite Aoba to lunch again, but Aoba wants to finish this particular section. Not wanting Aoba to skip meals, Yun hands her a box of CalorieMate bars.

Aoba finishes, starts munching on the Calorie Mate block, and wonders what Hifumi does for lunch. Hifumi notices Aoba’s gaze and freaks out.

After they two calm down, Aoba finds out that Hifumi usually eats before before coming to work. Hifumi also mentions that she wishes she could eat with Sojiro. Hearing the male name, Aoba freaks out and thinks she’s talking about her boyfriend. However, Sojiro is actually Hifumi’s pet hedgehog.

After they have a conversation about hedgehogs and men, Hifumi continues to scroll her cellphone to show Aoba more pictures of Sojiro. She then inadvertently shows Aoba a picture of her smiling while playing with Sojiro. As a result, Hifumi is embarrassed. 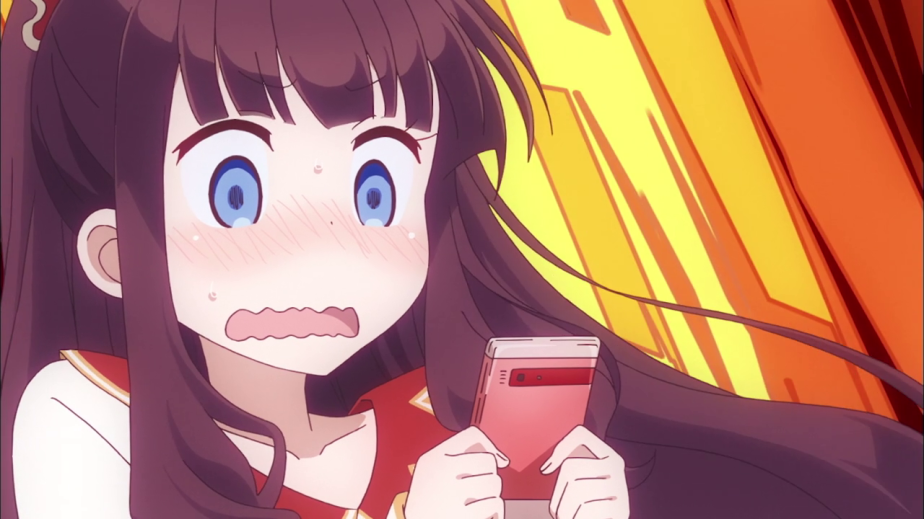 Yagami walks in, tells Aoba that taking breaks is part of the job, and tosses her a riceball. Thankful for the riceball, Aoba promises to treat Yagami to lunch.

Aoba starts chowing down on her riceball, which causes Hifumi to see Aoba as a pet hedgehog like Sojiro. The scene then jumps to Hifumi going home and greeting Sojiro. He basically ignores her when she asks him about her smile, which really upsets Hifumi to the point that she buys lunch the following day and claims she got into a fight with Sojiro. 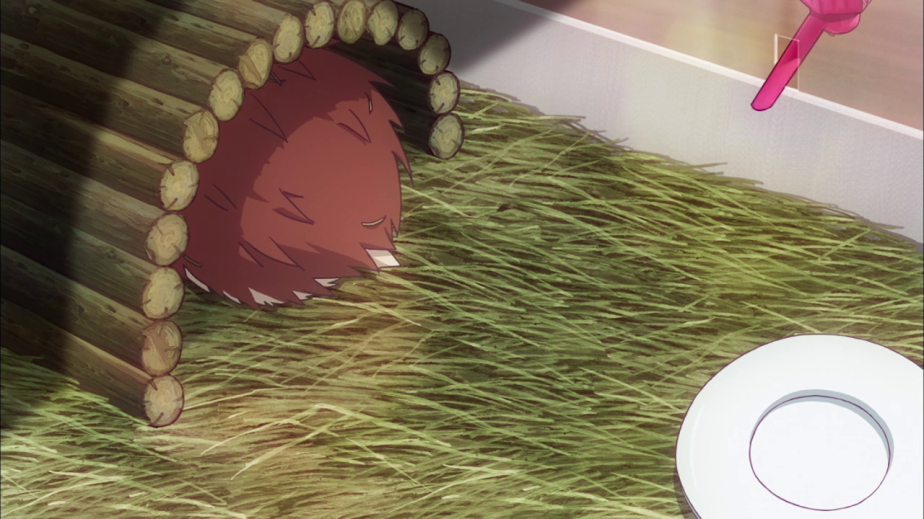 There was a nice eyecatch, too. 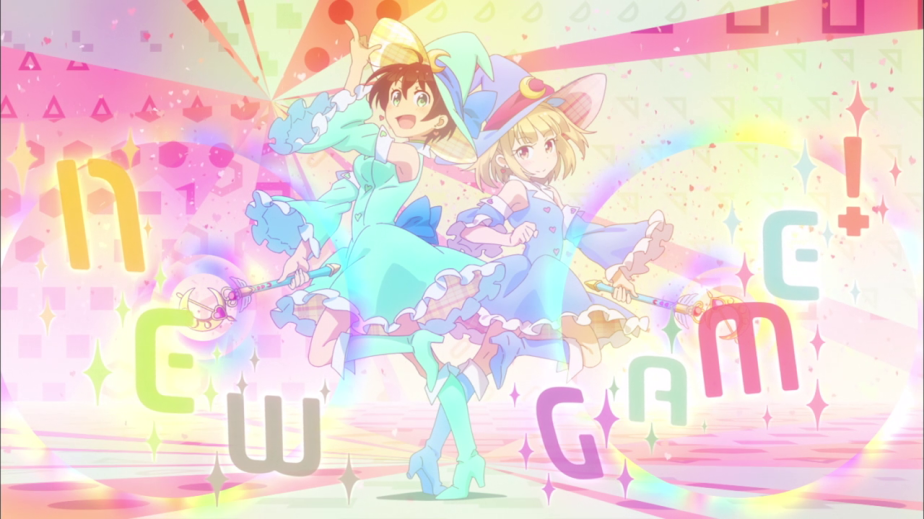 After Yagami gives Aoba her first project, adding NPCs into a city, Aoba and her senpai co-workers have a tea party. As they talk about Aoba getting used to the work environment, Yun teases Hajime by saying that Aoba made less mistakes than Hajime. Hajime then proceeds to jinx herself by saying she doesn’t spill tea anymore. Aoba gets too absorbed in her project, of which Yagami approves. Nevertheless, since the workplace is throwing Aoba a welcome party, Yagami tells her not to make everyone wait.

The gals are now at a hotpot place! Man, Asahi is great. I remember turning 21 and not being able to handle anything bitter, but Asahi really helped me get used to the taste of booze. 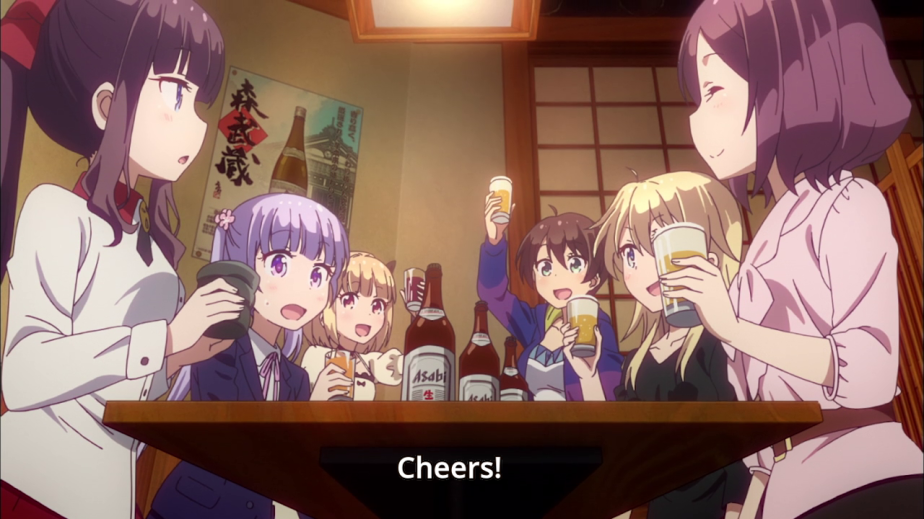 Yagami the prankster makes Aoba eat spicy takoyaki (Russian roulette style). You know, when one takoyaki ball is filled with hot mustard or something while the rest are fine. Takoyaki is really chewy, by the way. It’s an interesting food. We find out that this is Aoba’s first drinking party. Yun is a lightweight while Hifumi can handle the liquor.

The director then comes and makes Yagami look silly. Yagami gets flustered and tries to chase the director away. Shizuku then walks home to accompany her cat after stealing Yagami’s meat. The director owns Yagami, basically. Yagami gets plastered and asks Aoba if she has a boyfriend. Hifumi and Hajime are secretly interested while Rin is just surprised at Yagami’s audacity. Aoba denies having a boyfriend and returns the question back to Yagami. Rin becomes VERY INTERESTED. What a ship! Rin then says Yagami should stop drinking so much and drinks her order. As a result, Rin then gets drunk and tells Aoba to pour her some beer. Aoba does a pretty bad job, so Rin tells Kou to demonstrate the proper way to pour beer. Afterwards, Rin passes out.

As expected of Hifumi, the shy girl asks Aoba to order for her. [Aoba learned the skill, “How to Order Booze!”] The place then closes for the night.

Hifumi disappears and Hajime has to take care of passed-out Yun (I ship them), so the afterparty is just Yagami with half-dead Rin and underage Aoba. The ED then plays. I really liked how all the girls were dressed in white shirts and dresses. To a male pleb like me, it’s just amazing how these clothes can all look different despite being the same color. Aoba is also a yuri magnet according to the ED.

After the ED, Nene guesses that Aoba is working on Fairies Story 3, causing the both of them to freak out due to potential leaks. Oops! The next episode is titled, “What Happens if I’m Late to Work?”

See you next week!