Your weekly yuri mecha dose has arrived! It’s light on the yuri this time around, but it makes up for said deficiency with increased exposure of the cute and voracious sisters, Tia and Sara!

Something to note: there are a considerable amount of instances where the characters look off-model. If you like taking screencaps of goofy looking girls, this episode should be a goldmine.

This episode picks off where last week’s left off – Yui and Rena are trapped in a box that’s rigged to explode in three minutes. Through effort that leaves Rena exhausted, they manage to escape just in time. Amidst the explosion and smoke, the girls jump into the air and attack the magician duo.

The finishing move leaves the enemy in a smaller, damaged state. The enemy then clings onto the girls’ mecha and unleashes a kamikaze explosion attack. At some point in time, the green-haired dude somehow ejected since he is now on top of a cliff, watching his partner go boom. Yui and Rena survive but it seems like something is wrong with Rena since all this red gunk and weird eyes just spawn inside the cockpit.

The White Regalia with the lightning sword appears and begins fighting Yui and Rena. The big eater sisters have arrived!

While fighting, Rena goes berserk and begins to float. Her mecha then generates some sort of shadow barrier. In response, White Reglia summons an ice sword and plants it in the ground after cracking Rena’s barrier. While this is happening, Rena is in the unexplained field of flowers again. However, she also has a giant mass of shadows as unwelcome company.

From White’s embedded sword grows an ice tree. Yui finally realizes she can stand up to grab Rena’s hand. Meanwhile in Meadow Land, the shadows fuse together to form Dark Rena. Not exactly an original twist, but I still like the concept of protagonists having AN ENEMY WITHIN. Guess we’ll be seeing more of her later!

Rena then wakes up to Yui passing out like it was tag team wrestling. The red gunk and eyes go away right before the ice tree explodes. The green-haired dude is just chilling while wearing some gnarly thigh highs. He then leaves after Ingrid tells him to do so.

Rena recognizes the White Regalia as Tisis. The pilots of Tisis are indeed the big eater sisters, Sara and Tia. As the useless military helicopters fly in, Tia and Sara make their exit to stuff their faces at a certain restaurant.

Yui’s inner circle talk about what happened as Rena rests in bed. The group points out that Rena’s shadow barrier resembles the one spotted during The Fall of Rimegarde 12 years ago. She probably went berserk then, too.

After having a nightmare about Dark Rena, Rena wakes up to Yui at her bedside. Hugs and comforting words are exchanged.

The next day brings some sort of festival. While Yui is proving to be very popular among the common folk, Rena heads over to Retsu’s chicken skewer stall to ask her for a favor. Aoi tells Yui to take a break after receiving so many presents.

Yui then bumps into Sara, who is carrying a bunch of crates.

The scene then jumps to Rena and Retsu. It turns out Rena wants to borrow Retsu’s kitchen to make food for Yui, so the two of them head over to Retsu’s restaurant. The two bump into Tia, who seems to be working at said restaurant. All three girls know each other, so introductions are not needed!

As Yui and Sara introduce themselves to one another, Tia, Rena, And Retsu make some small talk over tea. Seems like the two sisters are working at the restaurant because they caused some trouble, but Sara has tricked Tia into thinking that they are the victims. 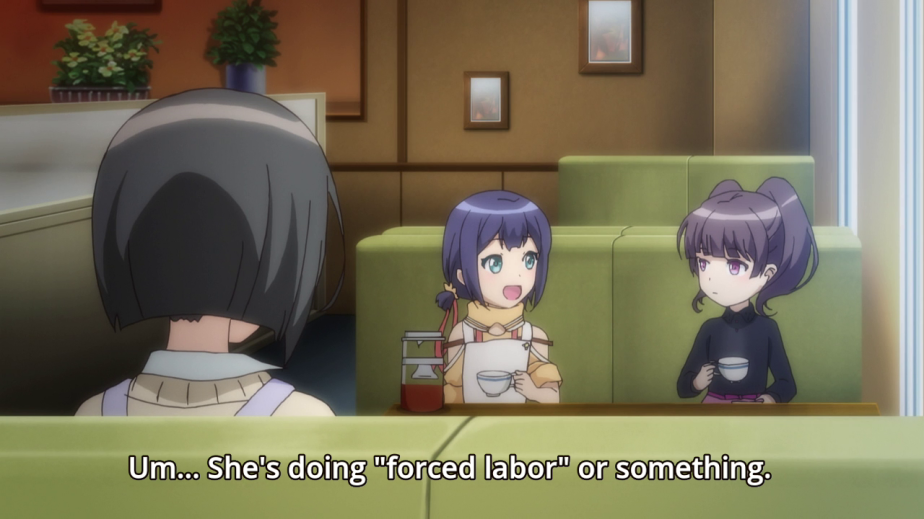 Retsu’s mom appears and tells Retsu to go back to the stall.

Again, I must stress that Tia is the reason why I watch this show.

While Tia is being cute, Sara continues spreading her lies. Yui is fooled and demands to meet the responsible villain.

Rena and Tia start cooking. Seems like they used to cook together. After the two wonder why Kei is doing these things, Tia suggests that she, Sara, Rena and Yui should live together. Rena hesitatingly replies she would like doing so, but Yui has her hands tied as the Empress.

After Retsu sets the record straight about Sara’s labor contract, she, Yui, and Sara start selling chicken skewers. The trio return right as Rena and Tia finish baking the thank-you cake. Additional introductions are made, which is followed by Tia spilling the beans about her being a Reglia to clueless Yui (while Retsu is left in the dark).

At the dining table, Yui says to Rena that they should stay together forever. Rena looks sad before agreeing. The five girls then eat cake.

The next episode is titled “Feigned Confidence.” See you next week!