This week we learn more about the fallen angel, YOHANE. Will she be the next member to join the School Idol club?

After the obligatory summary of the previous episode, YOHANE is shown doing a live stream broadcast as a fallen angel, complete with a flickering candle and an air conditioning fan to generate dramatic wind.

Once she ends the broadcast, she’s upset with herself. It turns out Yoshiko is actually ashamed she impulsively acts like a chunni out of habit. Furthermore, she feels like she can’t go back to school after introducing herself as a fallen angel.

After the OP plays, the five members of Aqours seem disappointed that they’re still ranked at only 4700 or so. Ruby and Hanamaru are turning out to be very popular, however.

Since she lives at a temple, Hanamaru is astounded by the idea of a computer. In a flashback to a recent trip to Numazu, Ruby reveals Hanamaru’s unfamiliarity with technology.

As they continue to demonstrate the wonders of technology to Hanamaru, Chika wonders if their group is too plain and if they can somehow stand out more. When Riko suggests renaming the group, Chika is relentless with her teasing (“Three Mermaids” was Riko’s initial suggestion when the trio were attempting to come up with names, if you recall). 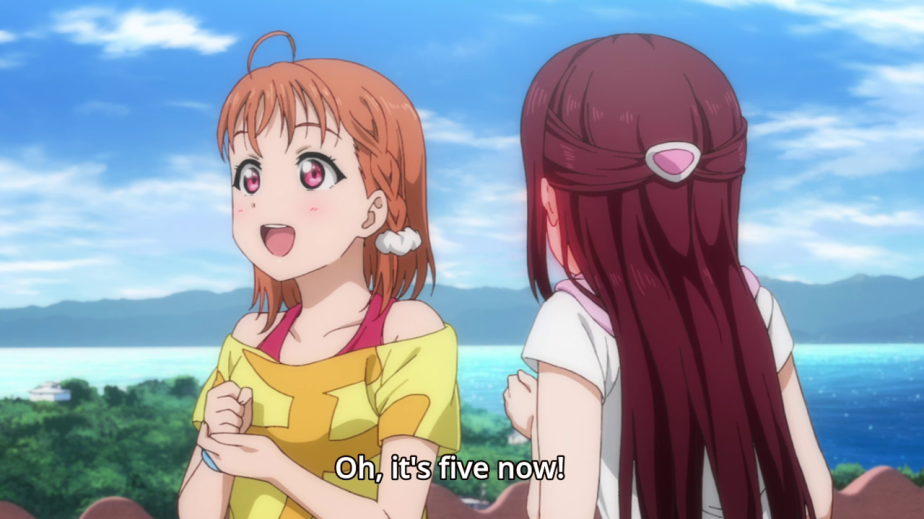 As the girls talk about how dancing with fins would be impractical, Zuramaru notices Yoshiko peeking out at them before scampering off.

Hanamaru then tracks down Yoshiko, who’s sulking inside a cabinet of some sort. She convinces Yoshiko to start attending school again. However, Yoshiko wants Hanamaru to stop her if she involuntarily falls back to her fallen angel persona.

The next day marks a new beginning for Yoshiko. It goes well until Yoshiko reveals she does fortune telling as a hobby and gets carried away.

At the School Idol clubroom, Hanamaru claims that she wasn’t able to stop Yoshiko in time because she wasn’t aware Yoshiko brought that stuff to school. After Yoshiko confesses that she knows she can’t be a fallen angel, Riko asks Yoshiko why does she carry around such things.

However, Chika mutters to herself that Yoshiko is cute and asks Yoshiko if she wants to be a school idol.

Over at Chika’s house, the girls are now shown wearing gothic dresses. Apparently Yoshiko’s stream gave her the idea about using the unlikely combination of fallen angel school idols to stand out.

After Yohane agrees to try out this novel theme, Riko steps outside only to encounter her nemesis, Chika’s family dog. Finally we get to see how she interacts with the dog and it is g l o r i o u s. It has to be seen to be believed.

The girls then all go home. You goes home with Yohane via bus, Ruby walks off with Hanamaru, while Chika stays behind with Riko. It’s amazing how the girls all split into my preferred ships.

Chika reveals to Riko that she feels responsible for dragging everyone into her idol idea, but she lacks the strength to guide everyone as a leader. Chika also apologizes for mistakenly thinking their group is plain since every member has a distinct personality.

The next scene shows the girls seeing the reception towards their new video which introduces Yohane as a new member of Aqours, the fallen angel school idol group. Amazingly, their rank jumps from the 4700s to the 900s! Once again, Ruby is really popular.

However, Dia claims their approach is wrong and that their popularity boost is only temporary. You checks the rankings again to find that their rank has fallen back down to the 1500s and is continuing to descend.

Later, the six girls talk about how trying to superficially change their image was not how μ’s did things. If only they knew about Death Metal μ’s.

At any rate, Yoshiko decides that she’s pulling the group down and that she shouldn’t join Aqours. She thanks them for going along with her fallen angel antics and walks off. Hanamaru talks about how she understands why Yoshiko wanted to be a fallen angel since Yoshiko has always been just a normal girl. I’m seeing the parallels between her and Nico. We also get the treat of seeing kindergarten Yoshiko and Hanamaru in a flashback. The next day has Yoshiko putting away her fallen angel stuff, claiming it is for the best. However, the idol group is waiting outside of Yoshiko’s apartment. They then ask her to join Aqours again.

Yoshiko then runs away, prompting the group to chase after her. More Nico parallels! At any rate, Aqours eventually catch up to her and the girls convinces Yoshiko to join. The episode ends with Dia asking Mari about the meaning behind an e-mail Mari sent out. Both girls are seen getting very emotional, which must be something serious since this is Mari we’re talking about.

The next episode is called, “Let’s Make a PV.” See you next time!