Glass no Hana to Kowasu Sekai was a movie that was released back in October 2015. I had plans to watch it back in January, but I was kept busy with college, oops. Nearly seven months later, I’m here to review this film!

Summary: Archived within the “Box of Wisdom” are many different worlds, many different timelines, and many different people. Whenever a world is infected by Viruses, Dual and Dorothy, two anti-virus programs residing within the “Box of Wisdom,” must delete said corrupted worlds. One day, however, the two girls detect the presence of a new Virus. Upon arriving at the scene, they save a girl who is being attacked by Viruses. Afterwards, the duo wait for the girl to wake up so they can ask her questions. When she finally opens her eyes, the girl calls herself Remo and whispers a single sentence, “I must return to the flower patch…” 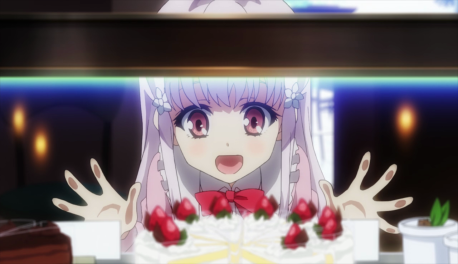 In a nutshell, the movie is a sci-fi film about two anti-virus programs, who basically act like magical girls during their battles against Viruses, encountering an unknown girl within their digital world. Not surprisingly, the two programs, Dual and Dorthy, have troubles understanding concepts such as eating, attachment, emotions, etc. Thankfully, Remo, the mysterious girl, somehow has a better grasp about these baffling topics and is able to introduce said ideas to Dual, the taciturn long-haired beauty who’s been having doubts about her purpose, and Dorthy, the hotblooded girl who’s never thought to question her role before.

Yes, there are battles and they, like the rest of the movie, are quite well animated, but the fight scenes are not the focus of this film. The main part of the movie is the three girls exploring the different worlds and timelines within “The Box of Wisdom” while talking about what it means to feel, the difference between organic beings and digital beings, and so on.

Personally, I think the premise fits the movie genre. The concept is interesting, but I can’t really imagine it being stretched over 12 episodes unless character development is slowed to a snail’s pace. Furthermore, since the movie handles complex, philosophical topics, I am worried that an anime adaption would have the girls talk circles around each other in an attempt to have enough content for 12 episodes. I mean, I guess it could work if the girls visit a new world / timeline every episode, but then it would probably become very formulaic.

Give Glass no Hana to Kowasu Sekai a try if you’re in the mood to watch magical girls (and Remo) talk about deep concepts while having the occasional battle scene. It’s a very pretty film!