Summary: A hundred years ago, tectonic forces plunged most of Japan’s landmass underneath the oceans. Coastal cities became the norm, which then evolved into marine cities, massive seaborne settlements that were part-city and part-seagoing vessel. In order to safeguard these oceangoing metropolises, the national maritime forces had to expand, which in turn offered more opportunity for women to advance in what what were traditionally masculine roles. In time, prestigious all-women outfits like the Blue Mermaids became every young girl’s dream job.

Akeno Misaki, nicknamed “Mike,” is one of these hopefuls, and enrolls in the prestigious Yokosuka Girl’s Marine High School in the hope of one day joining its ranks. There she meets up with her childhood friend, Moeka China, who is now the captain of the training ship, Musashi. Moeka also wants to join the Blue Mermaids one day, so who among the two friends will reach their dream first? 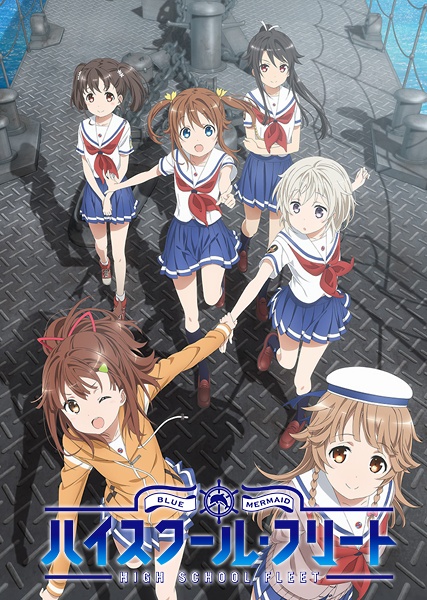 Review: The summary is intentionally vague about what the series is actually about. Hive-mind brainwashing biotechnology makes up a big part of this series and may actually determine whether or not viewers enjoy Hai-Furi or not. Personally, I found this aspect to be silly.

There are loads of characters (since a lot of the people behind Girls Und Panzer worked on Hai-Furi) and they all manage to look distinctive. I have no problem with how they look, since Atto, the person behind Non Non Biyori, did a really good job with the designs. Unfortunately, the studio apparently decided that just looking different wasn’t enough and made sure every character had peculiar personalities or verbal tics in order to make them all stand out. The end result has me feeling like the Harekaze was being manned by a bunch of circus animals.

Nevertheless, I think the show did a good job of giving screen time to every character, more or less. Obviously the bridge personnel sort of dominated the show since the main characters are situated there, but that can’t be helped. I personally wanted more scenes featuring my favorite character, Marikōji Kaede, the super ojou-sama.

Whenever a ship is involved, expect copious amount of CG. So if you’re really into ships, this anime could be fun for you. I never got into Kancolle, either, so maybe I’m not part of the intended audience. The animation as a whole seemed really good, though.

There’s definitely some yuri in the show, but I didn’t keep close tabs since I wasn’t really invested in Hai-Furi. The large amount of characters also made keeping tracking of ships (hehehe) a little more difficult. Still, it’s there.

Despite what I’ve been saying about the show, the OP never failed to get me pumped up and the ED would calm me down with its ambient tune. As far as OPs and EDs go, they’re great.

If you’re willing to get involved with an anime about girls manning battleships, you have be aware that Hai-Furi takes considerable liberties with realism. Despite featuring tons of characters, the studio made sure to give every character at least some screentime. I’d recommend watching a few episodes to see if you find a character that you like. However, I feel like Girls Und Panzer remains the queen of girls-doing-military-things shows. Hai-Furi just failed to live up, in comparison.