Summary: When Fukuzawa Yumi entered Lillian Girls’ Academy, a prestigious all-girls Catholic school in Tokyo, she never imagined she would catch the eye of the beautiful and demure Ogasawara Sachiko, one of the school’s most popular students. Now Sachiko has offered to be Yumi’s soeur, her “sister” and guide for all her years at the academy. The whole idea has Yumi completely flustered—after all, they hardly know each other!

The entire campus is abuzz with rumors about the two girls, but Yumi is conflicted over accepting Sachiko’s offer. While she admires Sachiko, being her soeur would also mean constantly being at the center of the entire school’s attention!

Review: The summary tries its best to be spoiler-free, but we all know that Yumi is going to accept Sachiko’s offer and the two will become soeurs. Otherwise the story would end right then and there.

As a result, Yumi essentially joins the equivalent of a student council for Lilian Girls’ Academy, where she grows and develops as a person as she experiences dramatic situations in rapid succession.

This is an older show from a different time period (2004 was a very long time ago for many of us). Therefore, don’t expect stellar animation or fast pacing. Nevertheless, watching a slower show compared to shows where characters are making out by episode 2 makes for a rather refreshing experience.

However, you also shouldn’t expect there to be many kisses in MariMite, either. I think there’s only two kisses shown on-screen across four seasons and one of them isn’t even mouth-to-mouth. At any rate, the yuri is limited to softer displays of affection, which is a-okay with me. MariMite is the quintessential show concerning pure yuri, after all.

I really do feel like the characters dramatize and complicate minor issues, but the cast primarily consists of high-school girls. I know I made some dumb decisions in high school, so I guess I have to cut them some slack.

Still, the lack of communication between Sachiko and Yumi really irks me. So many misunderstandings happen as a result. Rei and Yoshino fall victim to this at times, too. I guess not everyone can be as chill as Shimako and Sei.

I hope you’re not sick of “pastel pure” (the show’s OP) by the time you’re finished with season one since you’re going to be hearing that particular song again and again should you choose to watch the following seasons. Still, it’s one of the more beautiful melodies I’ve heard, so it’s not like you’re being forced to hear something terrible.

If you’re curious about a classic yuri series which set the curve for homages and parodies alike, then you should watch Maria-sama Ga Miteru. Very little kissing occurs, but yuri is splendid with just hand holding, hugs, shy blushes, and sparkling eyes, right?

However, do keep in mind that it’s an older show with rather lackluster animation and slow pacing. You can’t do much to alleviate underwhelming animation, but I do recommend setting aside enough time in order to watch several episodes at once. 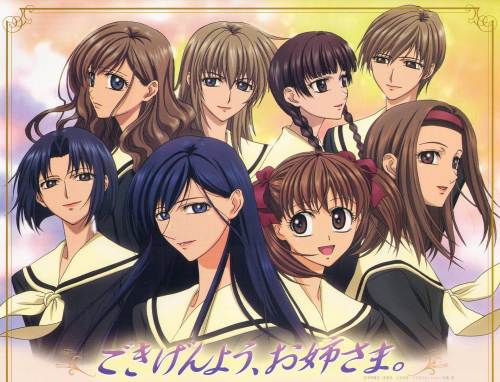