This week’s episode centers around multi-talented You. What sort of feelings does she hold towards Chika and Riko? And with Riko off to Tokyo for the piano competition, who can fill the vacancy in Aqours?

The episode opens with Riko boarding the train to Tokyo and all the girls more or less wish her luck. However, Chika stays behind even after Riko has departed, which You notices.

After the OP plays, Dia announces that it’s time for training. Before they start practicing, however, Ruby announces that Saint Snow took first place in the Hokkaido prelims.

It turns out Dia’s idea of practice is making everyone scrub the dirty school pool. Mari and Dia start snarking at each other as Yoshiko asks Kanan if the future of the school is jeopardy when the chairperson and student council president are acting so silly.

Once the girls finish cleaning the pool, they decide to start practice. In the slippery pool which caused them to slip and fall multiple times. Before they could hurt themselves, however, they fortunately realize that their current dance formation has to be modified since Riko is currently absent. The girls then unanimously decide on a girl to fill in Riko’s role as dual-center.

They then relocate to the roof. You and Chika’s timing is off since You keeps bumping into Chika. Mari seems to be watching the pair with great interest.

After practice, it seems like the third-years went off to do their own thing while the others went to a small store for refreshments. Ruby and Hanamaru enjoy a tangerine drink (?) while YOHANE receives a D rank prize at the store lottery (D for Demon!).

Meanwhile, You and Chika continue to practice, but You keeps bumping into Chika. You then suggests that Chika follow the same routine she practiced with Riko. They manage to successfully complete the routine for the first time, but this makes You nothing more than a substitute for Riko.

Chika then receives a phone call from Riko. After chatting with Riko for a bit, Chika then tries to pass the phone around so the others could talk with Riko. The first-years are all flustered and can’t really hold a conversation.

Before You can talk with Riko, Chika’s phone battery starts running low so they cut the call short. You didn’t really seem to want to talk to Riko, anyways. As Riko and Chika say their goodbyes, You pulls out a pair of connected tangerine drinks which split apart.

Meanwhile, the third-years are holed up in the student council room, trying to do paperwork. They then find Chika’s original School Idol Club application. Mari, who wasn’t the chairperson at the time, finds it strange that Chika originally applied with You since she seems closer to Riko.

As You is walking home, looking at the splite tangerine drinks, Mari sneaks up on You and grabs her chest. Apparently it’s almost as good as Kanan’s! You, who was already in a bad mood, defends herself from the mysterious groper only to belatedly realize she’s flipping Mari.

The girls talk about how You is jealous of Riko’s relationship with Chika and how You was so happy when Chika said she wanted the two of them to be school idols together since You has always wanted to do something with Chika. However, You doesn’t know what Chika is thinking and is jumping to conclusions while bottling her own feelings. As a result, Mari advises You to tell Chika about how she truly feels.

On the way to school the following day, You starts pondering on what she could tell Chika. Once You walks into the School Idol Club room, however, Chika tells You that Riko sent everyone scrunchies and that she’ll be wearing her own scrunchie during the piano competition. Hearing this causes You to be unable to talk to Chika about her feelings.

Once she’s back home, You whips out the glasses and starts thinking about what she could say to Chika. Her first idea features a kabedon (aka she pins Chika to the wall), her second idea seems more like a romantic confession, and her third idea has her wearing a mascot suit and pledging her alliance to Chika-chan (it’s the same suit from their second single, Koi ni Nairitai AQUARIUM, by the way). 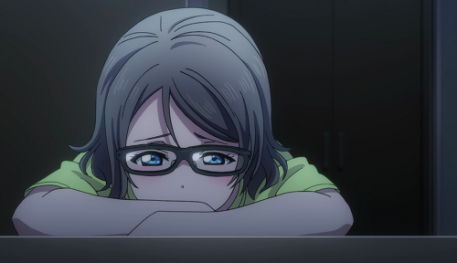 As You continues stressing out, Riko calls You to check in on her. It turns out Riko had heard that You is filling for Riko and tries to tell You that You should be herself and do her own moves. However, You reveals that she thinks that Riko is a better partner for Chika and that she’s rather distraught over how close the two had gotten. In response, Riko starts talking about something that Chika said before, but the viewers doesn’t get to hear it (yet).

After the two hang up, Chika pops up at You’s house and starts holding a conversation with You by shouting in the middle of the night. Aqours is full of bad girls, huh?

It turns out Chika didn’t like how You was acting like a replacement for Riko and proposes that the two of them work out a dance routine that’s just for the two of them. This causes You to start shedding tears as she runs downstairs to meet with Chika. As You runs, she thinks about the conversation she and Riko just had. It turns out that Chika felt terrible turning down You every time she wanted to do something with Chika.

Once they meet, however, You has her back towards Chika since she doesn’t want Chika see that she’s been crying. After she inches her way towards Chika, You stretches out her hand and notes that Chika is really sweaty. It turns out that the buses don’t run this late and that her sister was busy, so Chika biked all the way over to meet with You.

Chika’s dedication to their friendship touches You. After calling herself an idiot, she hugs Chika with force while crying.

The scene jumps to the day of the Love Live prelims, which happens to be the day of Riko’s piano competition. The nine girls basically compete as one and (hopefully) destroys their competition. 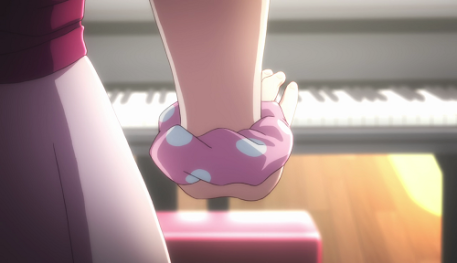 Aqours’ songs continue to be great. And with Riko gone, there was actually four pairs with zero girls left out. You and Chika were dual-centers, Ruby paired with Hanamaru, Kanan with Mari, and YOSHIKO WITH DIA?! Jeez, Yoshiko, you get along with everyone, huh?

Riko looks prettier than usual as she plays the piano. And I’m pretty sure this is the song that Chika and Riko were working on together in the previous episode, but I’m not completely certain.

The ED is fittingly sung by You this time. The next episode is titled, “Time to Take Flight.” See you next week!