Sorry that this episode review is so tardy. It just so happened I was out playing competitive video games after work yesterday and didn’t get home until late. And then I had to sleep and then I had work today, etc.

This episode is all about wrapping up Fairies Story 3. Aoba and her senpai attend a game exhibit where they get to see Fairies Story 3 featured; Aoba experience outfitting mishaps while Yagami is forced to dress up for an interview; and the company has one last-minute crunch in order to meet the deadline for the game.

The episode opens with Yagami telling Aoba, Yun, and Hajime to attend the Tokyo Game Exhibit so they can see Fairies Story 3 on the big screen. Hifumi has already made her way over there, but Nene is stuck in office because she’s a mere part-timer.

As a result, the three girls go to the video game convention (?). The usual OP is replaced with a trailer for Fairies Story 3, which I thought was a nice touch.

It turns out Hifumi is cosplaying at the game exhibit and is really popular! However, she loses her composure once she notices that Aoba is nearby. 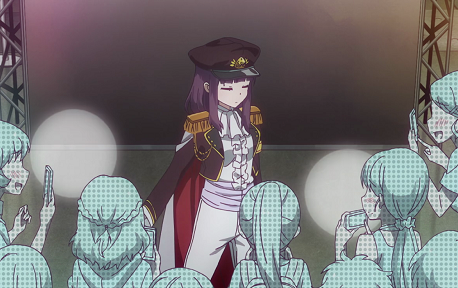 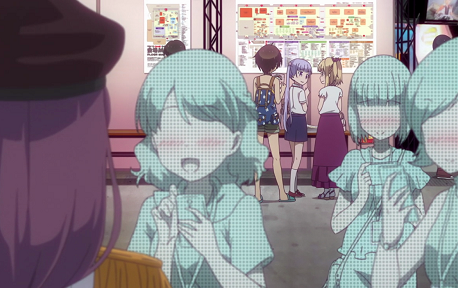 Meanwhile, the other girls become excited when they come across Fairies Story 3’s booth. It’s the first time something they’ve worked on would become featured in a game, after all. Their enthusiasm remains high once they return to the office. Hifumi, on the other hand, stays behind at the game exhibit and sets records playing the demo for Fairies Story 3.

New scene, new day. Aoba scrambles to put together an outfit since she forgot to pick up her winter suit at the dry cleaner’s. I think they all looked nice. In the end, however, she begged her mom to help coordinate her outfit.

It turns out that Sophia, the important NPC Aoba designed, is going to be featured in an artbook for Fairies Story 3, so Yagami wanted to know if Aoba is going to redraw Sophia chan sketches for the aforementioned artbook. However, Aoba decides to submit her original sketches of Sophia since she worked really hard on those. Good answer, Aoba!

Rin then waltzes in with a change of clothes for Yagami, who is going to be interviewed for a magazine. She tries her best to weasel out of wearing fancy clothes, but Rin and Aoba eventually convince her to give it a shot.

The director also makes an appearance and takes many pictures of flustered Yagami by holding down the shutter button. There are many great characters in this show and Hazuki is definitely in the running for that category.

The second half of the show has the company rushing to finish the game in order to meet the deadline. Aoba and the character design team are basically done at this point, but the debugging team is stuck doing an all-nighter.

Since the debugging team has to bite the bullet and stay up in order to finish by the deadline, Umiko tells Nene and Aoba to go out and buy energy drinks and food for them. Once they’re there, Aoba and Nene decide to buy Umiko the expensive Froggy Demon King energy drink since they assume that’s the kind of stuff she drinks. By the way, it costs over 2800 yen, which is roughly 27 US Dollars. That’s so expensive!

However, they were wrong and Umiko is at a loss for words over how the two girls thought buying the energy drink was a good idea. Nevertheless, she decides to try it and she awakens after a single sip. Aoba and Nene also try the Froggy Demon King drink, but the two girls can’t handle it.

The rest of the episode has the company coming together to finish Fairies Story 3. Since the game is now a finished product, this also means this is Nene’s last day working for the company. She breaks into tears over this and asks for everyone to take care of Aocchi.

There’s a short clip after the ED where Aoba and Nene head home together and end up overestimating the power of the Froggy Demon King energy drink.

Next week’s episode is titled, “One of My Dreams Came True!” The episode preview was just the cast watching the Fairies Story 3 trailer, so no hints for episode 12. See you next week!