Also Known As: MariMite 4, La Vierge Marie Vous Regarde, The Virgin Mary is Watching Over You, Maria Watches Over Us Season 4, マリア様がみてる〜４th〜

Summary: Yumi and the Yamayuri Council have found two new helpers in Kanako and Toko. Unfortunately, their assistance comes with tension, as neither girl is particularly fond of the other and both seem likely candidates to be Yumi’s petite soeur. Will either be a good fit for Yumi? As the school year marches on, the work for the Yamayuri Council piles up, and pressure begins to mount for Yumi to make her final decision. 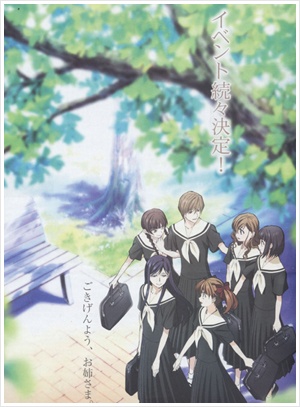 Review: I’m going to be frank with you all here and just flat out state that Kanako will not become Yumi’s petite soeur. The summary tries to pretend that it’s a close decision. Alas, the only actual candidate is Toko, to my relief.

I’m personally not a fan of Kanako, so I was rather glad that she remained insistent on never becoming Yumi’s petite soeur. However, Toko rather reminds me of the Sachiko of season one and two, who also rubbed me the wrong way. And yet I find Toko much more endearing than pre-character development Sachiko. Maybe it’s because she’s acting more her age whereas the Sachiko of old was haughty and lacking in communication skills despite already being a second-year in high school.

At any rate, the bulk of this season will revolve around the relationship between Yumi and Toko as well as Toko’s personal problems and issues (Sachiko and Yumi moments have decreased compared to the amount they received in season 3, but they’re there). Of course, since Yoshino is already a second-year, an episode or two revolves around her trying to find a petite soeur which minimalizes the amount of moments she gets with Rei.

Shimako and Noriko also receive relatively few moments. However, Noriko as a solo character receives a great deal of focus as she’s Toko’s good friend. As such, Noriko serves as the third-party viewpoint character at times since Toko refuses to open up whereas Yumi has become more adept at handling dramatic situations. Yumi sure has gone a long way compared to how she was in the first season!

What I found a bit peculiar, however, is how much characters idealize Yumi. Even Sachiko seems to think she’s a pure girl who indirectly reveals your own shortcomings by acting as a perfect person. To be fair, though, Yumi has consistently been potrayed as kind throughout all four seasons. Even in season 3, where Kanako becomes disillusioned with Yumi, Yumi isn’t really at fault since she was being her usual polite self to the boys from Lilian’s brother school. In other words, Yumi is probably one of the kindest female protagonist I’ve ever seen and Kanako was a silly girl who hates men and who grabs at extremes with no sense of scale or compromise. Kanako does get better, but then she just disappears from the show.

The rest of the Yamayuri do slightly develop compared to how they were in season 3. However, the sides we see of Kashiwagi Suguru, Sachiko’s cousin, during this season really made me appreciate him as a character. Yes, he was a jerk when he was first introduced, but he slowly became more likable as he showed that he’s a multifacted character. But there’s one particular scene towards the end of the season where he really grabs my attention by showing that he really cares about Toko. Explaining the context of the scene may consititue as spoilers, so I’ll just leave it at that.

The animation style follows season 3’s example, which is a marked improvement compared to the one used for season 1 and two. However, I felt there were a few off-model moments, which tended to happen whenever Toko was feeling distraught.

In regards to music, MariMite finally receive both a new OP and ED. Both are great songs. One could argue that the imagery accompanying the ED is more yuri than the actual show! The ED also remains very relevant to the story, which I always consider to be a nice touch. It makes me think they wrote the song to fit the show, which may or may not be true. Don’t take my word for it, folks.

One small complaint is the viewers are kind of left hanging. I understand that the original source materials continued on and then ended in 2012, but there were some unresolved plot points I would have loved to seen resolved. I guess what I mean to say is that I wish I could see more MariMite, but the major disputes were essentially resolved in this season and it’s been 7 years since this show aired. As such, it’s hard to disagree that this is the end (and satisfactory conclusion) to an animated adapation of an amazing series.