This week, the girls try to figure out the difference between Aqours and μ’s, Riko rejoins Aqours, and everyone comes to understand what made μ’s such a special idol group.

The episode recap was done by YOHANE this time, which is hilarious.

At any rate, the episode opens with everyone nervously waiting for the results of the Love Live qualifiers to be posted. In an attempt to cope with the stress, Kanan debates on going on a run, Hanamaru stuffs her face with food, and Yoshiko draws a ritual circle on the ground.

Then the results come in. Aqours passed the qualifiers! Mari then takes a page out of Joseph Joestar’s book and starts screaming, “Oh, my god!”

After the OP, Kanan tries to treat the group to fresh sashimi to celebrate Aqours qualifying for the Love Live competition. Then Ruby shows up with the laptop to tell everyone that their video has gotten a lot of views and comments.

Riko then calls Chika, who puts the phone on speaker phone. Everyone is excited that Aqours will be able perform as nine again soon and it seems like Riko came in first in the piano competition!

The third-years then declare that the video’s popularity probably means that Uranohoshi High’s Open House event should have received a lot of applicants and that their school is well on their way to being saved. However, that couldn’t be further from the truth.

The scene then jumps to Chika, You, and Kanan thinking about how no one applied to Ura High’s Open House while enjoying some shaved ice by the beach. We also get a flashback to Aqours being swarmed by fans as they made their way back from the qualifiers, which only adds to Chika’s disbelief about zero applicants.

After hearing about how μ’s had already saved their school by this point, Chika decides to ponder about the difference between μ’s and Aqours at her house.

She decides that the group should visit Tokyo and see if they can find any hints there, so she calls up the gang. We also get to see the girls dressed in their casual nightwear, yahoo! 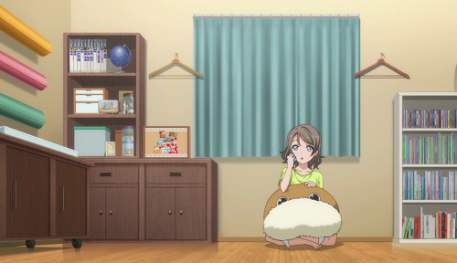 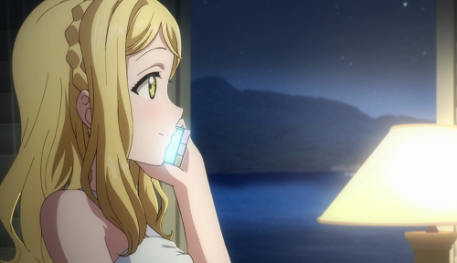 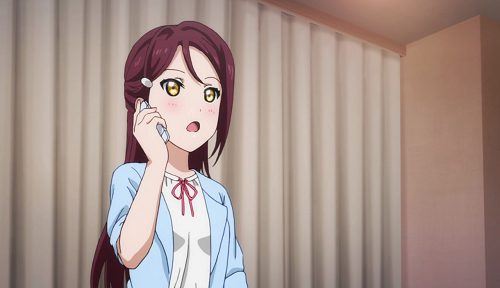 It also turns out that the stacks of books are Riko’s yuri literature collection. It’s grown by quite a bit!

The next day, the girls head to Tokyo. As Dia starts warning the others about the dangers of Tokyo, Ruby explains that Dia once got lost in Tokyo as a young girl.

While Riko is trying her best to stuff her yuri books into a locker, Chika and the rest of the girls find her. As a result, we get to hear Riko’s VA do some excellent screams and Chika is left with hand imprints since Riko desperately did not want Chika to learn about her interests.

Chika announces that the girls will be heading to the local shrine where she’s arranged for Aqours to meet with a certain someone. Ruby and Dia jump to conclusions and think they’re going to meet Nozomi, but the certain someone was actually St. Snow.

Upon being asked by Chika and the others, St. Snow also doesn’t know what made μ’s so special. However, they believe that’s not important since they just aim to win. At least the smug rivals act relatively civil, but they’re still smug. It also turns out that they were inspired by A-RISE, which is a neat parallel to Aqours.

The girls then visit Otonokizaka High. There, a mysterious Otonokizaka High student tells Aqours that μ’s didn’t leave anything behind. The girls also spot a young girl, who’s wearing Honoka’s haircut, sliding down the stairs like she’s a pro.

The girls then head back home by train. The pairings are fairly normal, except You is being rather cuddly with Riko while Chika is lost in thought. 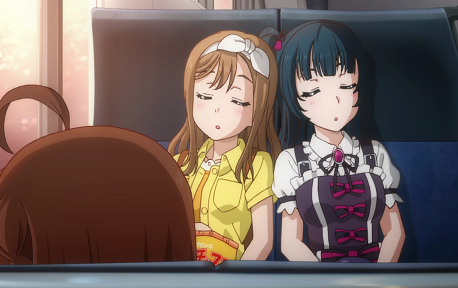 Before the girls return to their hometown, however, Chika gets off early in order to look at the ocean, causing the others to follow suit. The group seems to have ended up at the same beach μ’s visited in episode 11 of Love Live! S2.

Long story short, the girls realize that μ’s was amazing because they weren’t focused on results and danced freely, which is something Aqours needs to do.

Right before the ED plays, Chika is shown sleeping. However, she took down the μ’s poster, which symbolizes that Aqours is going to try forging their own path. I guess this will please people who think Aqours is a μ’s rip-off.

Next week’s episode is titled, “Sunshine,” which is rather fitting. See you next week!