Summary: The main character, Suzukaze Aoba, graduates from high school and joins a game company. It just so happens that the person who made the game that Aoba loved as a grade-schooler is Aoba’s senior at the company. The story follows the lives of girls who work at the Eaglejump company.

Review: The series follows the development, completion, and launch of Fairies Story 3, the game for which Eaglejump company is responsible. Viewers may even learn a few things about video game development while watching New Game!, but the primary focus is about girls.

The yuri component is quite noticeable with many possible ships to go around. I suppose the main question is whether Yagami will stick around with Rin or continue to get closer with Aoba.

I rarely felt that anything was being rushed or that anything was being dragged out. So the pacing is good, but not a whole lot happens within an episode. Still, no episode feels like a waste. Perhaps it is the humor which makes each episode enjoyable since the jokes are on-point and the interactions between different characters are very amusing.

Speaking of amusing character interactions, the way the director / Hazuki plays around with all the other gals is quite amazing. To be honest, I do read the manga and I did notice that her screentime has increased compared to the amount of times she showed up in the original source material. So the studio did a great job giving her increased focus without making her act out-of-character, in my opinion.

I enjoy how colorful the series as a whole is. The eyecatches in particular are very pretty to look at. I do appreciate seeing a show with elaborate eyecatches. As for the animation, it’s good for the most part. There were some frames with off-model faces, but I’ve seen worse and every studio seems to skim on detail whenever they think they can get away with it, anyways.

The music is great. I personally found the OP to be rather catchy. It’s currently on my office playlist and helps cheer me up when I’m at work. Admittedly, I kind of related to Aoba since I started my first job a few weeks after the show started airing, so there’s that.

New Game! is essentially a “cute girls do cute things” anime, but it is one that’s done right. With great gags and characters who are amusing yet don’t go over-the-top, every episode is entertaining to watch. While it may shed some light on Japan’s harsh working conditions (pulling all-nighters for your job sounds terrible), the show overall remains light and colorful. Even if you read the manga, I think the studio made a great anime animation and is worth checking out. 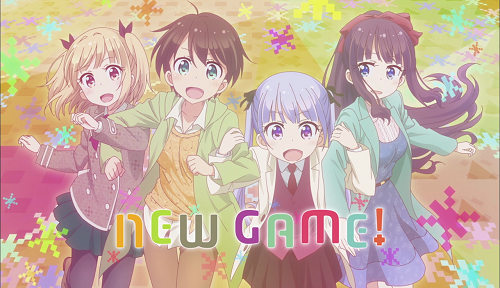