A small high school in a corner of Suruga Bay, it is home to nine teens. Led by second-year student, Chika Takami, the girls driven by one huge dream: to become the next generation of bright, sparkling “school idols!” 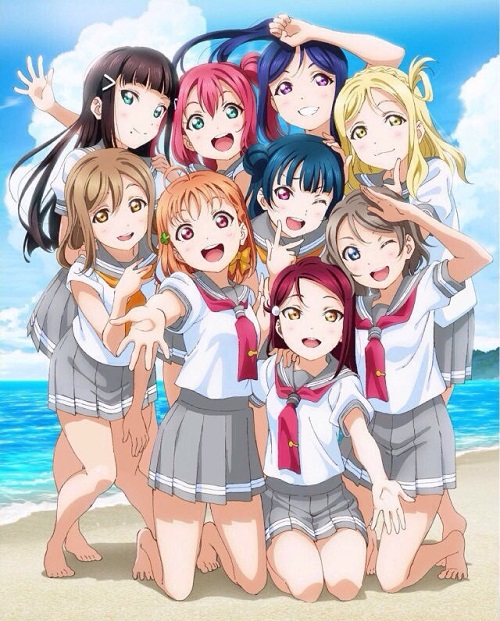 In my opinion, that’s fine. I know there are some viewers who claim that Sunshine!!, more specifically Aqours, follows the conventions of School Idol Project, or μ’s, too closely and that makes it seem like the series can’t stand on its own two feet. And to that I must respectfully disagree: I personally believe a spin-off is successful if viewers can enjoy the show regardless if they had watched the original series or not.

If you can get over the fact the number of references is rather high, you’ll find a quality show that has better animation and tighter storytelling (in general) compared to the original series. I also disagree with people who feel that it took too long for the third-years to join Aqours. Episode 6 had the first-years and second-years learning about what really makes their small school and town special while episodes 7 and 8 has the six girls visit Tokyo to learn about the crushing reality of school idols. The pacing is fine and I found it to be great that Aqours was formed on episode 9 since there are 9 members, but I do realize it’s another homage to the original series.

What I did find to be interesting is the amount of screentime the second-years received. Yes, second-years are popular as protagonists in anime because first-years are still learning how to cope with the high school environment while third-years are busy preparing to move on with their lives after graduation, which leaves the second-years as the girls with the most amount of time. It doesn’t hurt that You is the most popular Aqours member in Japan.

But it got to the point that it felt like the group would fall apart without Chika, You, and Riko (and maybe Kanan since we learn that she’s the one in charge of choreography once she joins). According to sources outside of the anime, Ruby helps You with designing costumes, but we only see her making funny poses and faces. It’s not until episode 13 that we get to see Hanamaru, who is similarly the one in charge of lyrics according to magazines, write a song – until then, Chika was the one responsible for lyrics. In short, the second-years really hog the spotlight.

I feel like I should mention that almost all of the seiyuus were inexperienced girls when they were casted for Sunshine!! (excluding Dia’s VA who only had a minor role in some other show). It almost felt like they were invoking the spirit of school idols by making the conscious decision to pick these newbies. And for the most part, they did an excellent job – I particuarly liked how Riko sounded. However, I do think that Ruby’s VA went a bit too hard on the cutesy loli imouto voice.

The VAs also NAILED IT during the songs which were inevitably sung throughout the series. I know I’m voicing some controversial opinions in this review, but I think everyone can agree that Aqours’ songs did a better job sticking to the themes of the episode and / or series than μ’s did.

I’m not going to point fingers during the moments of drama and say who’s at fault. However, I am going to say that there’s a lot of yuri shiptease for differnt pairings. It’s nice that’s it’s less clearcut compared to how the pairs turned out in μ’s.

Love Live! Sunshine!! is a show about learning what it means to shine and making small steps in order to achieve your goal. Maybe I’m not as critical on the show since I am relatively new to the LL franchise and thus not as defensive when it comes to μ’s, but I love Sunshine!!! Yeah, I put another exclamation point there.

The show brings to the viewer strong emotional scenes – seriously, I have an Aqours playlist I listen to when I’m at work and I get misty-eyed when I think about their struggles to become top school idols.

Strong animation, amazing songs, yuri shiptease – there’s a lot for this show to offer if you are willing to be open-minded and not obsess over μ’s. The homages are just that: homages. Enjoy the show. Watch Aqours grow.