Summary: It’s hard being the new girl, and Kominato Ruuko knows this better than anyone. She has yet to make any new friends after moving to a new town. Her brother sees her struggling and gives her a deck for the popular trading card game, WIXOSS, hoping that it would help Ruuko connect with other people and forge new friendships.

In Selector Infected WIXOSS, each WIXOSS deck comes equipped with a LRIG card, which serves as a player’s avatar during matches. It all seems pretty straightforward…except for one thing. The girl drawn on Ruuko’s card moves and talks! Is that normal? She soon finds out when a fellow student at her school approaches her and challenges her to a WIXOSS battle.

Over the course of their match, Ruuko learns a few things. First of all, she is a Selector, a special girl who is gifted with a living LRIG. Secondly, Selectors have the opportunity to make a wish come true. But, finally, if they lose three matches, they forfeit their chance to realize a wish and instead become cursed. Ruuko’s fight for her heart’s desire begins now! 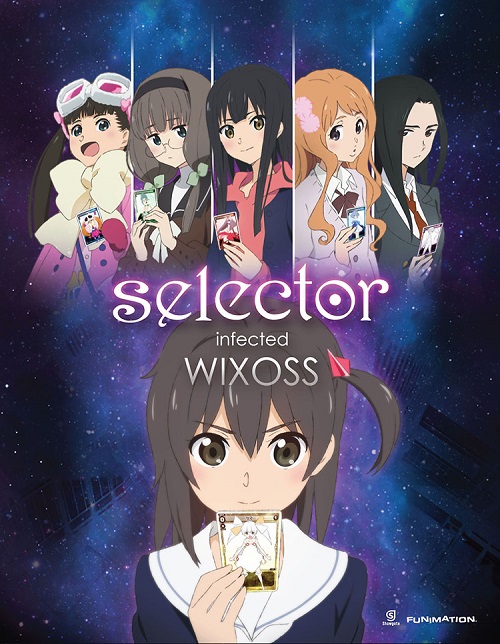 Review: Well, the summary gives away about half of the twists present in this first season. I won’t be mean and go into specifics in regards to what happens to a Selector if she has her wish come true, though. I’ll just say it’s a sadistic system and leave it at that.

The drama comes from this screwed-up system and, frankly, it defines the show. It’s rather different from other trading card game anime shows since it doesn’t really focus on WIXOSS at all. It’s just girls battling other girls to fulfill their wishes. Whether or not that’s a positive or a negative depends on the viewer.

As for the characters, they can be rather polarizing. Some may find their actions to be misguided, to put it politely. But drama requires characters who make mistakes in the heat of the moment, after all. We do get to see why some characters have their reasons to want their wishes granted, at least. As for the others, the explanation is never really made, which keeps viewers guessing for now.

In regards to the yuri, a certain character is prone to making double entrendes when she’s talking to Ruuko. And there’s another instance where Yuzuki is physically intimate with Ruuko on Ruuko’s bed (oh, my!). Other than that, though, the girls are basically just close friends or bitter enemies or mere acquaintances. There’s too much chaos happening for romance to blossom!

The animation as a whole is acceptable. Nothing really amazing. Sometimes they intentionally go for this grainy effect. I think it does a good job showcasing how nitty-gritty this setting is, but other viewers may think otherwise.

Lastly, the music. The OP, “killy killy JOKER,” is probably one of the best OP songs I’ve heard. I’m a big fan of chaotic sounds, it seems. It kind of makes the ED forgettable in comparison.

Selector Infected WIXOSS goes straight for the drama and doesn’t really bother explaining the card game it’s trying to market. This makes it different compared to other trading card game anime shows by default. With interesting yet polarizing characters and a fantastic OP, the show has the potential to lure viewers in…only to break their hearts with the cliffhanger ending on the final episode.

Thankfully, there’s a season two, but I’ll have to binge watch Selector Spread WIXOSS before I can review the second season. Anyways, give Selector Infected WIXOSS a watch if you want to see a trading card game where everyone essentially suffers (think Yu-Gi-Oh and Puella Magi Madoka Magica put together, I suppose).