Impression: Mahou shoujo meets Dragon Ball Z and The Lion, The Witch, and The Wardrobe.

Review: The viewpoint character is Cocona, a reserved blue-haired girl who is struggling to decide what she wants to do in life. She’s a good student, but she lacks a direction.

Meanwhile, Papika, a passionate red-haired girl who basically rides a surfboard through the air, decides to search for a partner by herself, despite her support staff memebers’ protests. Her associates, which consists of an emotional scientist, an unnamed girl, and a boss named Mr. Salt, try to stop her by using TT-392, a quirky robot who ends up tagging along for the ride.

After Papika and Cocona meet, TT-329 ends up teleporting the three of them into Pure Illusion. Details are left murky as to what Pure Illusion really means (which makes sense since this is the first episode), but the girls and the robot seem to teleport into an alternate world. Since they ended up in a winter wonderland by entering through a pipe, I could not help but think about Narnia.

After playing around in the snow, the trio take shelter for the night until they encounter hostile ice giants. One of them ends up seizing Cocona’s glasses, which causes ladykiller Papika to risk her life in order to grab the ocular aids as Cocona begs her to come back and forget the glasses.

Cocona ends up going super-saiyan in order to save Papika. Since TT-392 was also playing around Cocona’s thighs earlier, I believe Cocona’s transformation has to do with her being a potential partner candidate with Papika. 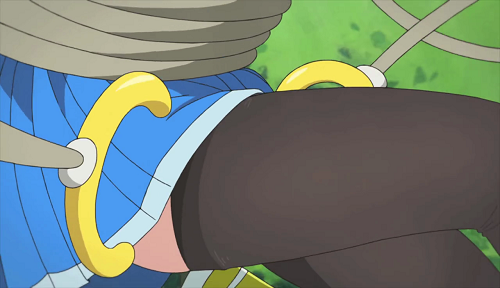 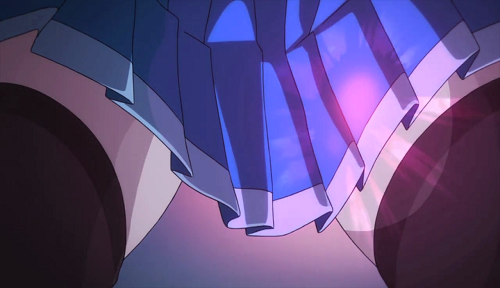 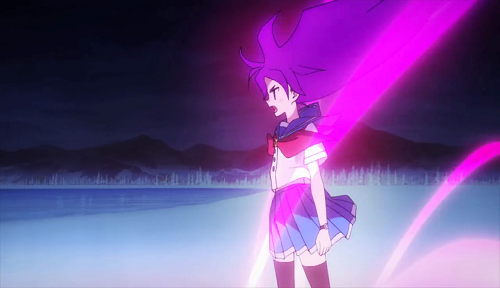 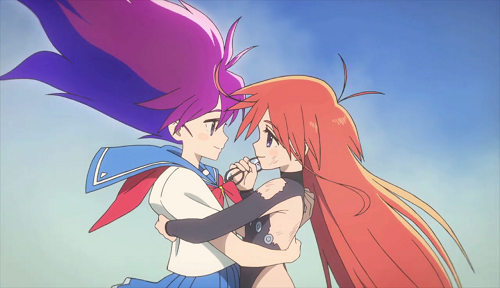 The three of them end up going back to Cocona’s world, with Cocona somehow finding a weird rock showing up in her palm. Then the episode ends with a dramatic cliffhanger as the two girls are incapacitated.

Side-notes: I’m curious as to how this anime will develop. As it stands, however, the main draw for this show is the animation style, which is very unique – the battle scenes in particular are quite fluid and flashy and colorful.

I think the ED is probably the cutest of the season, but maybe I should just speak for myself.