The two girls visit yet another world despite Cocona’s protests. Will Cocona find adventuring to be fun? And will Papika ever understand why Cocona is hesitant to go adventuring?

This week gives little explanation once again (we did learn fragments are supposed to grant wishes and that FlipFlap is gathering fragments in order to “liberate Pure Illusion,” but we still don’t have any idea about what exactly is Pure Illusion). Nevertheless, this is the second episode of a magical girl series where the hesitant heroine is usually convinced to join the cause, so the big reveal should happen next episode at the earliest. There are already some grim implications and foreshadowing happening here or there, so don’t be fooled by the colorful, picturesque worlds Cocona and Papika visit.

Despite the previous episode ending with Cocona and Papika getting gassed and captured, the two girls are completely fine by the start of this one. No explanations are given as to why that even occurred. As such, Cocona just wakes up in her bed and assumes everything was a dream.

However, encountering TT-392 and Papika again changes Cocona’s mind. Yet Cocona is hesitant to go adventuring again because she doesn’t want Papika to risk her life once again. After she gets blown off, Papika decides to honor a magical girl series tradition.

It turns out that Cocona accidentially brought Uexkull, her pet rabbit (?) to school with her, so she’s attempting to hide him while running away from Papika. Yayaka ends up helping Cocona hide in the nurse’s room.

At any rate, Cocona has a brief chat with a senior about a painting before Papika finds and tackles Cocona. Uexkull tumbles out of the bag and starts running away.

The two girls give chase to Uexkull and end up adventuring once again. This time they ended up in a distinctly more colorful world and sort of become rabbit girls? I should apologize for jumping the gun in the first episode, by the way. This series is going to be more like mahou shoujo meets Tsubasa Reservoir Chronicle. 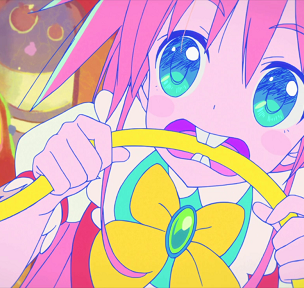 Unfortunately, Papika retreiving the fragment causes Cocona to get trapped in a blender. Uexkull appears (as a manly bunny man) and shields her from the debris. However, the two then locked inside a cage that is slowly descending towards what seems to be lava. No chill, Pure Illusion, no chill.

Papika goes SUPER SAIYAN MAHOU SHOUJO and demonstrates barrier powers as she shields Cocona and Uexkull and takes them to safety. Her barrier powers also help everyone exit Pure Illusion and re-enter their usual world.

Papika finally sees Cocona’s point about adventuring being dangerous since she was scared that Cocona could die, but Cocona has also realized that adventuring is fun and promises to do that every once in a while.

The episode ends with Cocoa being introduced to the other members of FlipFlap. Then Cocona and Papika are locked inside cubes and disappear after something activates.

Next week’s episode is titled, “Pure XLR.” See you next week!