Agari and Koyori finally face each other in ping pong. The battle to determine the club ace starts, and concludes, this week! And another club member joins the fray?

The episode opens up with a little backstory flashback for Agari. Apparently her mother was the one who pushed her to aim for the top in every endeavor. Unfortunately for Agari, she was second-rate at everything she tried until she discovered ping pong.

Then the OP plays. They added a little something special for this episode – I considered it to be a nice touch.

As for the match itself…I won’t go into details. But we do get to learn more about Koyori’s playstyle as well as Agari’s playstyle. Agari aims for loops drives, hits which cause the ball to spin with topspin like crazy, which causes the opponent to automatically return the ball upwards. This sets up for an easy backhand smash for Agari. Meanwhile, Koyori’s forehand smashes just get stronger and stronger as the match goes on. The match in general is much longer than the ones shown before even though a lot of skipping occurs. Nevertheless, it’s a very exciting match!

….well, I think the victor of the battle is pretty obvious, but I’m happy to see that Agari starts finding ping pong fun again. A lot of blushing happening, though. Is her heart (as wel las Koyori’s heart) beating from finding ping pong tanoshii, or is from something else? 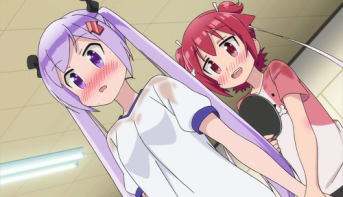 And then there’s Munemune-senpai silently hoping that their team can go to the nationals. I know that’s basically the dream of every high school sports club, but I can’t help but think of Saki whenever I hear the word “zenkoku.” The fact that Koyori and Agari are a pair of blushing maidens only helps the comparison. At least it took them only three episodes to be on a first-name basis. Saki and Nodoka took like 25.

After the ED, which was also stretched out for this episode, we get introduced to the ping pong club captain. Apparently she had a foot injury, which is why she was on hiatus, but she’s all healed up now. Time to rejoin the club and exert dominance over Munemune-senpai!

This show isn’t well-received by many at this point. Perhaps the reason for their dislike stems from Agari, who is the most polarizing character on the show by a landslide. I admit, I found her selfish desire to remain the team ace to be annoying and offputtinf at first. But with the slight bit of backstory followed by this great match, I feel like I understand and sympathize with her a bit better.

I’m just speaking for myself, but I want to stand out. I want to accomplish something incredible that people will acknowledge. Agari, too, just wants recognition. Well, dreams will remain dreams. At least Agari learned the errors of her ways, right?

I have no idea about the title for the next episode. Judging from the episode preview, however, Agari pulling on Koyori’s cheeks? A twintail tsundere appears yet again! See you next week!