The Captain returns to the Ping Pong Club! Just how good is she? And will she ever get Munemune-senpai to lick her foot? Spoilers in this review!

After the OP plays, we learn that Koyori and Agari have been fighting for the ace position for weeks now. They’re currently tied at 7-7, but Koyori is on a losing streak. Munemune-senpai implies that Koyori is missing a crucial something and that she’ll fall behind Agari someday. It also seems like Agari is still training with Munemune-senpai after practice, but Agari is quick to deny that Koyori is the one giving her a reason to train so hard.

While it’s nice that Koyori and Agari are getting along, the series would not go anywhere without someone changing the status quo. This is just the job for the returning club captain, Kiruka. After introductions and greetings are exchanged, the captain doesn’t hesistate to praise Munemune-senpai’s boob pillows and then challenge everyone in order to determine the roster for the prefecture matches. 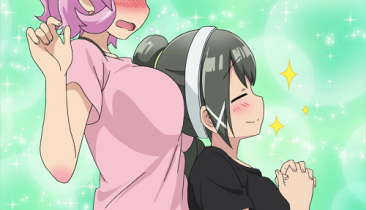 If an opponent can score even one point on her before she can score five points, she promises that girl will secure a spot in the roster. However, if the opponent loses to the captain, she’ll have to wear nekomimi for the rest of the day.

The stories and rumors are all true – the captain, who specializes in backspin, is really strong. As a result, almost everyone is forced to wear cat ears as Kiruka claims this is boring. Conveniently, the episode ends as a cliffhanger before she faces Agari, which could be a worrying trend since that’s exactly how episode 2 ended. Are they going to keep using an entire episode to hype up a match that takes place in the following episode? This will change by the time the girls are participating in the prefecture matches, I hope.

Next week’s episode is titled, “I Want to Do Exciting Things With You.” Pretty suggestive! See you next week! 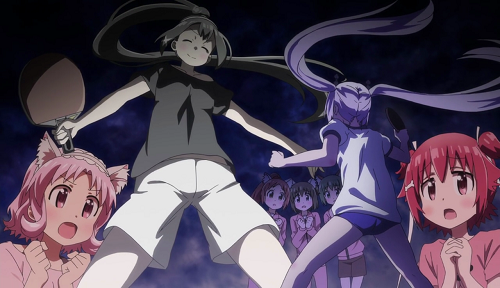