I’m going to try to keep this post as short as possible by trying to just reference all the callbacks to and the foreshadowing seen in previous episodes while keeping the whole summary thing to a minimum. It’s still going to be long, though. This series truly does not have a single wasted moment. As a result, I think we have already seen Hardgore Alice’s real form in an earlier episode.

Well, Koyuki wakes up in her bed. She initially believes her seeing a headless magical girl stab someone through the stomach with her bare hands was all a dream. Was it?

Most of the episode largely consists of some Calamity Mary scenes and some Ripple scenes. I have to admit, Calamity Mary’s characterization surprised me. She’s upset that someone who was acting under her orders was killed (she told Magicaloid 44 to kill someone in episode 5). So avenging Magicaloid 44 is more of a matter of pride and image. I thought the episode of the title was talking about friendship!

She’s also the only one (that we’ve seen) who has realized that Fav is playing favorites. As a result, she coaxes Fav into telling her who killed Magicaloid 44 by promising Fav that she’ll give him what he wants. In other words, she’ll kill Hardgore Alice to help reduce the amount of magical girls.

The way I see it, the whole “the magical girl with the least amount of candies dies” thing is just a subtle push for the girls to kill each other. After all, when La Pucelle died, the magical candy elimination round did not take place that week. As such, I believe that the means are not important to Fav; he just wants their numbers to slowly go down at least on a weekly basis.

The eyecatches for the episode:

The next few minutes lets us see more of Ripple’s family life via a series of flashbacks. Her mom keeps getting with new men, which causes people to bully her. She tries to be reasonable, but the bullies keep pushing and pushing her…

This is definitely in-character with what we’ve seen of Ripple and her explosive temper. Remember back in episode 2, right after her brief scuffle with Calamity Mary?

It also turns out her latest stepdad was a creepy peeping tom and overall scumbag. No wonder why she moved out to live by herself.

The knowledge of how depraved the man is makes the text message Ripple received in episode 2 even more scary.

Then the show switches back to present day. Turns out someone (Top Speed) called Ripple out so they can do some good deeds together.

Then we transition to the meeting between Snow White and Sister Nana (and Winterprison). Of course Snow White joins her cause! Idealism solves everything! Then Hardgore Alice appears, which freaks out Snow White, and also joins the alliance.

Snow White and Hardgore Alice are then left alone because Sister Nana wants to meet with more magical girls. Oh, dear, it must be the four-girl-squad. Snow White tries to make her exit, but Hardgore Alice just chases after her.

Realizing that she can’t escape, Snow White notices this is an opportunity to return the Rabbit’s Foot to HG Alice. However, Hardgore Alice says she wanted to give it to Snow White in the first place. Why?

Really? You gave up 6 years of your life to give Snow White a free present? In case your memory needs some jogging, here’s the shop list of Super-Rare Items from episode 6.

Also from Episode 6 was an eyecatch that told us a bit more about Hardgore Alice. Apparently she likes stuffed bunnies so it makes sense that she would get the Rabbit’s Foot. I guess she’s on Snow White’s side in the end. But what could have Snow White have done for Hardgore Alice to make her like Snow White so much?

At this point, I became convinced that we, the viewers, probably have an idea why Hardgore Alice likes Snow White. After all, this episode was chock full of references to previous episodes. So after some pondering, I think I figured it out.

In episode 1, we got to see Snow White helping a lot of people. However, there was one particular girl who we, the audience, got to see up close and personal. Could it be? 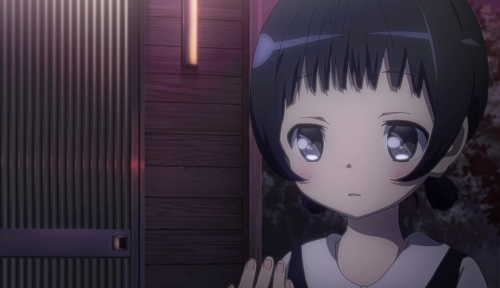 I don’t know. But it could be possible.

Ripple also gets told to meet with Calamity Mary two days from now. She then has a flashback to her first meeting with Calamity Mary (seen in episode 2) and is disgusted. After rewatching the scene in episode 2, I can’t see why Ripple hates CM to that extent. Maybe because she wanted to exert her dominance over Ripple? Because she took a sneak shot at Top Speed before running off?

A showdown between Ripple and CM may or may not happen next week.

The episode ends with Winterprison and Sister Nana walking into the temple to meet the four-girl-group. Swim Swim is ready to ambush the pair, oh no.

Next week’s episode is titled, “Sudden Event in Session!” See you next week!