Summary: The story revolves around high school girls who discover the appeal of motorcycles. Sakura Hane is a high school student who looks a little bit like an airhead. On the way to her all-female high school one day, she is worn-out climbing a hilly road with a bicycle, but she sees a girl named Amano Onsa who is riding a motorcycle. Sakura immediately becomes interested in motorcycles, and she and Onsa join the motorcycle club at the school. 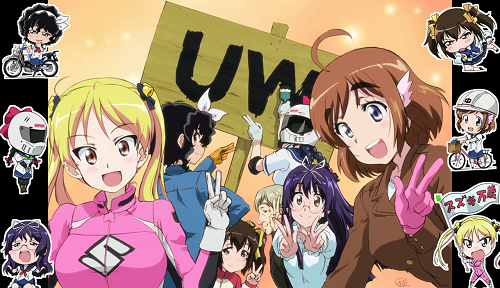 Review: It’s essentially a “girls-ride-motorbikes” show. Not much else to tell you. If you’ve seen one schoolgirl series, you’ve seen most of them.

Since it’s a slice-of-life show, there’s not too much of a continuing story throughout the series. As such, things that would be would frowned upon in other shows, such as frequent flashbacks, are accepted. If a flashback is needed to make a joke funny, then the show shamelessly sticks to said formula in order to keep viewers interested. That’s a good thing because these gags were pretty good. The later episodes really switched focus towards Chisame’s memefaces, however. Chisame was like the prototype of Chitose from Girlish Number. Not bad for a supposed side character! 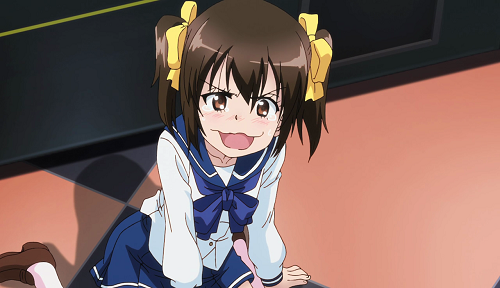 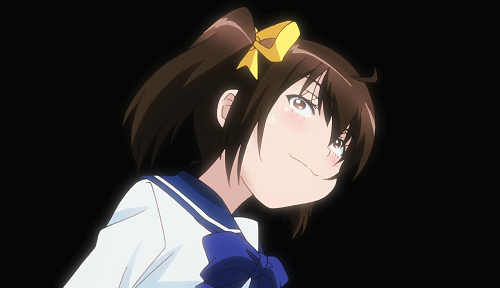 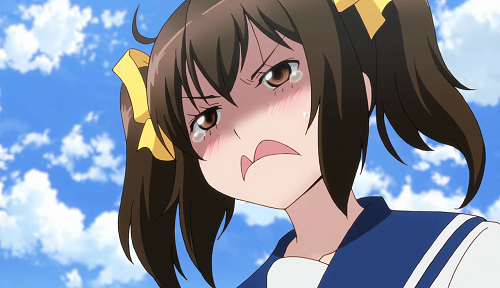 Maybe I was just in the mood to hear jokes, but I thought the comedic timing on this show was excellent. That being said, a lot of humor ventures into raunchy territory. Think Seitokai Yakuindomo. There’s also some cringe humor (gags that are supposed to make you feel embarrassed for the character) as well as black humor (Jesus ends up handing Hane the Holy Grain, for one thing). If that kind of stuff ain’t up your alley, this show will be rough for you to watch.

I think the masses can’t come to an universal agreement when it comes to Bakuon‘s artstyle. It’s a bit rougher than most usual schoolgirls series, but I personally find it cute. Nevertheless, when they go for fanservice scenes, which they do surprisingly often, it’s slightly jarring?

The yuri bait was pretty strong in this series. The teacher ends up drunk and starts acting like a perverted lecher around the schoolgirls – said incident makes up the bulk of the yuri in the series. Nevertheless, there’s definitely a few vibes between the principal and Raimu-senpai as well as between Onsa and Rin. The sexual tension between girls who can’t get along is also welcome.

I actually came in expecting to learn a bit about motorcycles and I guess I learned a little. It just doesn’t really go into too much detail, however. Bakuon!! is more like a show about girls who happen to own motorbikes. The schoolgirls are the main focus whereas the motorcycles are just there. Not that it’s a bad thing since most viewers aren’t that into autobikes  to begin with.

What’s weird about this show (and I guess it’s what makes it stand out) is the fact that there’s an ageless senpai wearing a motorbike helmet. We never get to see her face or why she’s eternally a high schooler. Well, I mean GochiUsa has a similiar thing going on with Chino’s grandfather being a rabbit. It’s a trend for schoolgirl series?

The music was very average. I didn’t have a problem skipping the OP and ED as I watched each episode (but I did watch the OP and ED on episode 9 when they added in a new character). Nothing to write home about.

Aside from the unusual character design and the hilarious gags, Bakuon!! doesn’t have much going for it. You might pick up a few things about (Japanese) motorcycles from watching this show, but it’s just another schoolgirl series at the end of the day. I recommend watching it if you’re having a terrible week and you think a few good laughs might help. Just turn off your brain and enjoy.

I just realized I went through this entire review without including a picture of the girls on their motorcycles. I’m pretty sick right now and that definitely caused this review to be a little weird. Sorry about that.