Were we just given an episode where magical girls pilot mechas?

Well, yes, that’s what happened and I’m finding it hard to complain because I’ve always been a lowkey mecha fan. It’s just something about the passion and energy that comes with the genre. More about that later.

Cocona and Papika (along with Yayaka, Toto, and Yuyu) end up entering Pure Illusion during swim class. As a result, everyones struts around in swimsuits for the entirety of the episode. Pure Illusion happens to be a futuristic city this time. If you’ve ever watched anything from the Tron franchise, you should have a decent general idea of the setting.

As I said, I enjoyed the episode since I do like mecha shows. Since the fragment was in a giant monster, the episode was kind of like a mecha v. monster thing, which is fine by me. But I have to admit I found how the sequence events unfolded in this episode to be silly.

Whenever something went wrong against the monster, they always had an answer which involved the man who resides in this particular Pure Illusion (they called him Pops) reveal yet another countermeasure while saying, “If it’s you girls, you can do it.” Maybe it was a parody of how the main characters in mecha shows always seem to overcome improbable odds in order to save the day? At any rate, it became a bit repetitive. 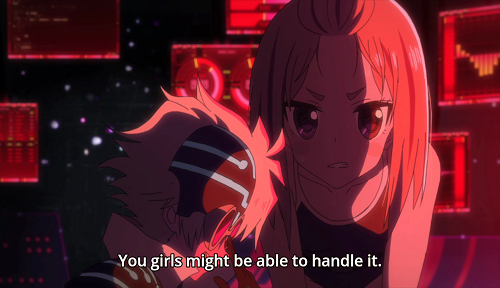 I guess Ossan is supposed to be Hidaka in Pure Illusion. You don’t remember Dr. Hidaka? The loud, obnoxious scientist? Yeah, him. Ossan sure is a lot cooler than Hidaka, though…

Ossan had one moment where he says he can’t leave behind the city he created. “What’s the point of surviving if I lose something precious in the process,” he screams. It’s at that point Cocona decided that she shouldn’t overthink things and worry about changing things in real life through her conduct in Pure Illusion. If something’s precious, she’ll protect it. Well, that was easy. Why didn’t she listen to a stubborn mad scientist rant earlier an episode or two ago? Sarcasm aside, it just seemed to have been resolved way too abruptly. Well, that’s just my opinion.

Yayaka got a lot of focus this episode. Contrary to what she’s been claiming, she’s rather soft on Cocona and Papika as she tries to help them while claiming it’s in order to claim the fragment. I’d like to say she’s acting like a typical tsundere, but the fact that the twins seem to be judging her for helping out Cocona and Papika, their enemies, makes manners rather complicated.

And in the end she claims that they should leave the fragment behind for Cocona and Papika while boasting that they can steal it back at any time. Yayaka is really sending mixed signals and the twins have picked up on it. Hopefully the organization lets this slide.

As it turns out, she can also scream, “FLIP FLAPPING” and syncronize with Cocona and Papika, too. She might even be able to transform. However, Yayaka is hesitant to do so since she finds passionate yelling to be embarassing. But she did it in the end and looked like she was enjoying the battle. I guess there’s some sort of aesop about not trying to look like you’re an adult that’s too cool for childish things, but that’s me just digging real deep.

The episode ends with Papika calling Cocona Mimi. This series sure likes giving the viewers the slowest of developments and ending each episode on a sort of cliffhanger. Or they bombard us with some important information at the very end. Studio 3Hz the tease.

Next week’s episode is titled, “Pure Mute.” Who is that magical girl?? Guess we’ll have to wait and see. See you next week!