Also Known As: I’ve Had Enough of Being a Magical Girl, 魔法少女なんてもういいですから。

Summary: Hanami Yuzuka is a young, carefree girl who lives the most ordinary life imaginable. Although her father works around the clock and her mother is rarely home, she still enjoys herself and strives to be an excellent student.

Miton, on the other hand, is an alien life-form with the ability to transform his master into a magical girl, a warrior who fights evil wherever it may appear. However, there are not as many enemies as there used to be, so Miton has been out of work for a while. Starving and homeless, he has taken up residence in a pile of garbage.

As Yuzuka walks past him one day, Miton seizes the opportunity to offer his services to the young girl. Yuzuka reluctantly agrees, but when she transforms into a magical girl and discovers that her outfit is a swimsuit, she begins to have second thoughts about what she has gotten herself into!

Review: Well, the summary basically described the plot of the series in its entirety. Mahou Shoujo Nante Mou Ii Desukara. (yes, there’s a period in the title) is about Yuzuka, a normal girl who is pressured into becoming a magical girl. It just so happens her magical girl outfit is a swimsuit, which causes her no small degree of embarrassment.

The strong point of the series is seeing Miton get no respect. After watching a few magical girl series with sinister mascot characters, it was a bit refreshing to see one get what he deserves when he does or says terrible things. I just pretended Miton was Kyubey or Fav whenever he got burned by a pot or almost drowned.

I’m a bit weirded out how much fanservice is in the show. Yuzuka is middle school yet she’s (unwillingly) parading around in a swimsuit. And then there’s a bathtub scene where she experiments with her powers and panty shots and so on. I understand that fanservice just comes with magical girl series as a given (just look at transformation scenes! Speaking of which, it popped up relatively often in this show), but I didn’t care much for it.

The thing is, there’s no tension in the series whatsoever. While Miton claims it’ll be bad if people knew about Miton and magical girls in general, Yuzuka’s best friend, Chiya, is quickly in the know and everything is fine. Then again, she has the potential to be a magical girl, so things may be a little different. Oh, but Yuzuka’s mom finds out and nothing happens.

The summary was understating how little enemies there are for magical girls these days. Apparently they’ve all been defeated so there’s no point to magical girls in general.

There really wasn’t anything to complain about in regards to the animation, at least, and I did like the OP as it was slightly catchy. I’m also a sucker for Alice in Wonderland imagery, which happened to look very vibrant in this instance, so there’s that.

Chiya definitely has the hots for Yuzuka, by the way. That’s the primary reason why I’m even reviewing this show! It’s mostly one-sided, however. Maybe Yuzuka will notice Chiya’s feelings if Chiya gets clingier and blushes harder than she already is. 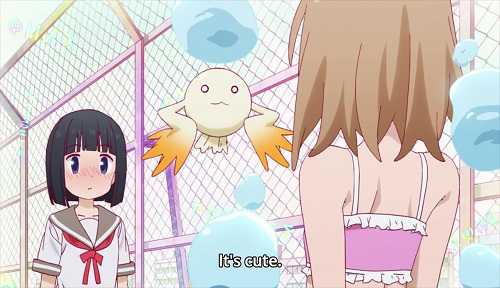 I mean, it’s one of those short anime series where every episode is four minutes long. Watching the entire 12 episodes takes less than an hour. It was funny to see a mascot character be the butt of almost every joke, but the excessive fanservice of an overly young girl was not to my liking. After all is said and done, not much happens in this show which is to be expected. Just keep that in mind if you decide to watch this show when you’re trying to keep busy for an hour or something so you’re not disappointed. It definitely wouldn’t be my first or even fourth choice, to be honest.

To be honest, I’m surprised it got a second season. I wasn’t that motivated to watch this season or to review it, but it had to be done. It just took me a few months to finish the show and a few more days afterwards to even consider reviewing it.

…I guess my review of the second season will come out eventually.