In recent years, it has become rather common for light novels to receive anime adaptations. This in itself is not anything particularly noteworthy. After all, I cannot count how many anime series initially started off as manga series, visual novels, video games, or even card games. However, I personally believe there are inherent problems which manifest whenever a series crosses from the world of light novels to the world of anime.

First off: what is a light novel?

A light novel is a type of Japanese novel. The books are, in some ways, comparable to manga since the novels in question tend to contain manga-inspired illustrations. Unlike manga, however, light novels usually only have a handful of pictures; the bulk of the novel consists of, well, words. If this cumbersome introduction is not doing it for you, then just think of a paperback novel with a few pictures thrown in.

Why adapt light novels into anime?

As I had previously mentioned, the illustrations that typically accompany light novels are very reminiscient of the art found in manga. The art style shared between the two mediums is animesque (I think most visitors to the blog knows what kind of artstyle I am referring to so I wil skip the explanation). Not only do light novel illustrations bear a resemblance to anime (and manga) artstyles, but the contents are also similar. The tropes and expectations and storytelling found in light novels should not be too unexpected if you have seen or read a fair share of anime or manga. In short, light novels share a lot in common with manga and anime in terms of both art and themes.

Neverthless, light novels are still distinct from anime due to the very natures of the two mediums. Sure, it might seem like a good idea to adapt a popular light novel series into an anime, but the following two issues seem to pop up again and again and should be considered.

Scenes will get cut for the sake of timeslots

These days, most anime receive 1-cour. That is 12 (or 13, on occasion) episodes and each episode is around 24 minutes long. If you lop off the time that the OP and the ED takes up each week, you are left with around 20-21 minutes for a single episode. 12 x 20 = 240 minutes of content (not that the OP and the ED of shows should be considered non-content, but this is a simplification, alright?)

Meanwhile, a single volume for a given light novel series usually spans 40,000 to 50,000 words. As a result, the studio has to somehow cram a volume (or even multiple volumes) of content into four hours of twelve 20-minute-segments. Light novels do not have to consider commercial breaks or time constraints (unless the writer is running late on a deadline, haaaa), but studios do! Therefore, some scenes from the light novel are dropped and will not be shown in the anime adaptation. Some light novel fans, who were looking forward to seeing their favorite parts become animated, will inevitably become disappointed instead.

Sometimes characters will not be introduced on-screen (Wiz in KonoSuba is a glaring example. People who have not read the novels will be unsure as to who Wiz is since her own introductory mini-arc was essentially cut out of the anime). Sometimes important bits of dialogue or exposition will be missing. Sometimes characters will act very differently compared to how they were depicted in the original source material (Taimadou Gakuen 35 Shiken Shoutai would be guilty of this. Complexities in motivations and mindsets were simplified and characters were flanderized, supposedly. This was due to how the studio attempted to cram entire volumes into 1 or 2 episodes. That’s hours of content being jammed into 20 to 40 minutes). Sometimes studios, in other words, will take any necessary shortcuts to make sure their weekly broadcasting timeslot is a snug fit.

I believe that this is due to how the two mediums intrinsically set different types of pacing. When I think of an individual watching anime, I assume that the person is going to watch each episode from the beginning to the end. In my opinion, that is how anime is commonly enjoyed (which makes sense since that is also how anime is broadcasted if you exclude the commercial breaks); episodes essentially demand the audience to give them a their time and attention for a set “block” of time.

Perhaps the viewer may rewatch a few scenes or pause to take a break, but the viewer will ideally “consume” the anime episode in one go and not spend several days watching the episode a single time. Otherwise, the viewer may lost track of what happened and may spend even more time rewinding said episode, causing something (that should have taken between 20 and 30 minutes to watch, tops) to take longer to finish watching. The immersion and the intended experience thusly becomes affected.

For light novels, however, the author assume (or should assume) that readers typically will not read through entire volumes, from front to back, without stopping. While anime episodes are typically enjoyed in a single sitting, episodes are, as stated earlier, much shorter than volumes, which will take hours to read through in its entirety. As a result, readers will usually opt to read chapters at a time (or may even stop in the middle of a paragraph because life and free time is unexpected).

Because light novels do not have to adhere to the sort of strict time frame that is expected of anime, authors are able to include long exercepts of dialogue, exposition, or stream of consciouness. In my opinion, they believe that it is more important to make sure the reader understands exactly what is going on (it is surprisingly easy to get lost if there are no pictures to serve as an aid) within the story. As such, studios typically have to do a degree of “trimming” so the anime adaptation follows the episode format.

Scenes will be added (sometimes due to personal preference)

On the opposite side of the spectrum is the addition of original content. Unlike the aforementioned “scene-dropping,” I believe that these particular incidents are largely due to the personal preferences of the director.

Apparently, an emotional scene between Haruhito and Yume in Hai to Gensou no Grimgar was added as an anime-original scene and the director admitted to being a fan of the ship. I must point out that this was an unverified claim so I cannot support the validity of such a statement. However, the very fact that something like this, that the anime adaptation will feature altered events and characters according to the director’s tastes, is even plausible proves to be rather telling.

Another example could be seen in Mahou Shoujo Ikusei Keikaku, a show I reviewed on a weekly basis last season. Granted, I’ve yet to read the novel series (I just don’t have enough time right now) but it seems like this particular director was a fan of Snow White. According to my friend, who read the original novels and who would swing by every week to share her insights into each episode,  Snow White’s key traits regarding her characterization were not properly displayed on-screen. As a result, it caused many viewers (including myself) to see Snow White as both ineffectual and naive. I guess this is an example of where a director’s meddling hurts a character’s development compared to how said character was depicted in the original source material. 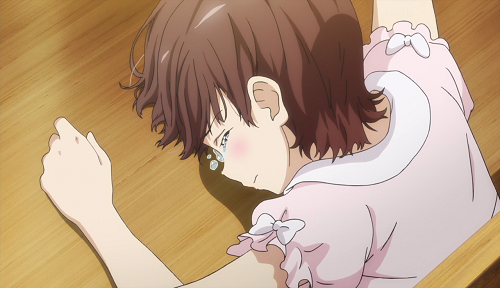 I have also yet to read the Bakemonogatari novels, but according to Emily, the anime adaptation departs from the light novels in terms of viewpoint. In the original material, the audience is left to pick up the pieces, as it were, from Araragi’s interpretation of the other characters. Consequently, we don’t get to see as much of the heroines of each arc compared to their considerable screen-time in the anime. This, combined with the lack of the distinct and visual storytelling that has essentially become a trademark of the franchise, has caused viewers (who were first introduced to Bakemonogatari via the anime) to feel “more distant” towards the heroines. I have no idea whether or not these changes were due to the director’s preferences, but the anime adaptation has benefitted as a result in my opinion since it makes the show both unique and memorable.

I am also not quite sure why this seems to happen so often in anime adaptations of light novels. Perhaps it has to do with how the light novel is less visual compared to the manga and the anime mediums (in terms of pictures), which allows for personal intrepretation to fill in the gaps. Nevertheless, some anime adaptations of manga series will add original scenes, as well, so this point remains confusing and vague, like this post and its ending.

That’s all, folks. Sorry to bore you all with this theory that is not really supported with hard evidence.

I would love to hear your thoughts regarding light novels and anime in the comments section.

15 thoughts on “Wednesday’s What About: Anime Adaptations of Light Novels”