Summary: Gakkou Gurashi! follows the daily antics of the School Living Club in Megurigaoka Private High School.  The club members include the childish Takeya Yuki, the reliable president Wakasa Yuuri, the athletic Ebisuzawa Kurumi, the mature kouhai Naoki Miki, the supervising teacher Sakura Megumi, and the club dog, Taroumaru. However, all is not as it seems.

Review: The review makes Gakkou Gurashi! sound like another typical Cute Girls Doing Cute Things show. However, it really isn’t due to a variety of factors. The story has plenty of twists and turns which reward the observant viewer. Gakkou Gurashi! also features, for better or for worse, a plethora of (well-framed) flashbacks to help clarify the current situation. Even viewer who typically avoid slice-of-life series can probably enjoy Gakkou Gurashi!

(Spoilers throughout the rest of this review)

The main draws for this series are that a) it’s actually a zombie series and that b) Yuki is delusional and tries her best to pretend she’s not living in a dire and grim world where a single mistake can prove to be fatal. This gap between moeblobs and such a serious setting could be considered jarring yet intriguing. Such a disparity leaves viewers curious, engaged, and wanting to see what happens to the cute girls of the School Living Club. However, the drawback to this draw is that a lot of viewers become interested in the series because of this first twist. As a result, the impact of the initial surprise may be diminished since many viewers aren’t going into the series completely blind.

Be that as it may, there are additional developments that can potentially catch the viewer off-guard. As a result, the viewer remains engaged and interested in the members of the School Living Club. Some of these surprises are foreshadowed and can be essentially “predicted” by astute viewers, which I personally found exhilarating since I love combing through shows for hints.

On an unrelated note, flashback episodes make up nearly a third of Gakkou Gurashi! While flashbacks could be considered to be lazy storytelling if used improperly, I personally found the flashbacks to be purposeful and meaningful. I never felt like I was being “cheated” out of actual content whenever a flashback occurred. Quite the opposite, actually, considering how flashbacks typically fleshed out the setting and provided some explanations when viewers had answers. Some anime adaptations of various light novel series should take notes!

I do have a few minor issues with the series, however. Yuuri and Miki are kind of like broken records since they continuously discuss the possibility that the school is overly equipped to deal with this zombie outbreak and that may be no mere coincidence. While they’re probably right, the two girls bring this up episode after episode as if they, or the audience, needs the constant reminder lest we forget entirely. I’m not really a fan of such hand-holding, to be honest. Let the viewer connect the dots sometimes, yeah? The series is much more tact regarding Yuki’s delusions, however, so there’s that!

I also wasn’t really a fan of how Kurumi did most of the physical gruntwork. Sure, she’s their primary combat force against the zombies, but just relying on her seems unfair for the overworked girl. Then again, the other three girls seem rather unathletic and there aren’t that many available weapons. I guess this is more out of necessity, then. Still, I’m remembering what’s it like to do most of the work in a group project whenever I see Kurumi trying her best to defend the others.

In my opinion, there are some interesting and poetic themes regarding nostalgia and acceptance. For instance, Yuki is delusional and clings onto the illusion that the school and living conditions are fine. Furthermore, the zombies are actually shown to somewhat remember considering how they are drawn to school. This is given as a possible explanation for why more and more zombies hang around the school as the series progresses (and is actually proven during the climatic final episodes). In regards to acceptance, all of the School Living Club members have experienced losing someone precious and they all eventually comes to terms with their losses. Their experiences could resonate with a viewer who’s currently dealing with a break-up or a death in the family, potentially. But I’ll leave it at that.

All of the girls in Gakkou Gurashi are interesting, or at least multi-faceted, which is always a plus in my book. The fact that Yuki is essentially oblivious to their current situation means that the others have to play along. This means the girls have to be inherently dishonest as a result. Even outside of said facade around Yuki and their more serious demeanors around each other, however, the others have to struggle with their own mental hang-ups and problems. I mean, it would have been weird if the girls were all as cheerful as Yuki in their current situation. Be that as it , I found the girls to be rather relatable for the viewer.

I’m a big fan of the OP, “Friend Shitai.” Even though it sounds overly cutesy, it’s clear that the animation team put in a lot of effort since there are little details within the OP that “evolve” as the series progresses (in order to reflect major changes or reveals within Gakkou Gurashi). I wrote a post about this, in fact, and that can be found over here. The various EDs are all very sentimental, emotional, and slower-paced. They’re all good, in my opinion, but the OP sort of overshadows them.

As for the yuri, the shiptease is definitely there if you don your shipping goggles. My favorite ship, KurumixMiki, didn’t really get that many moments, but that’s just my personal preferences chiming in…

Gakkou Gurashi! is a surprising slice-of-life show that deviates from the typical conventions of the CGDCT genre. Between the grim setting and strong storytelling, I think Gakkou Gurashi! is worth checking out even if you aren’t a fan of cute girls simply doing things. And don’t worry – the series still has a lot to offer in terms of startling reveals even if you already know about the initial twist in episode one. 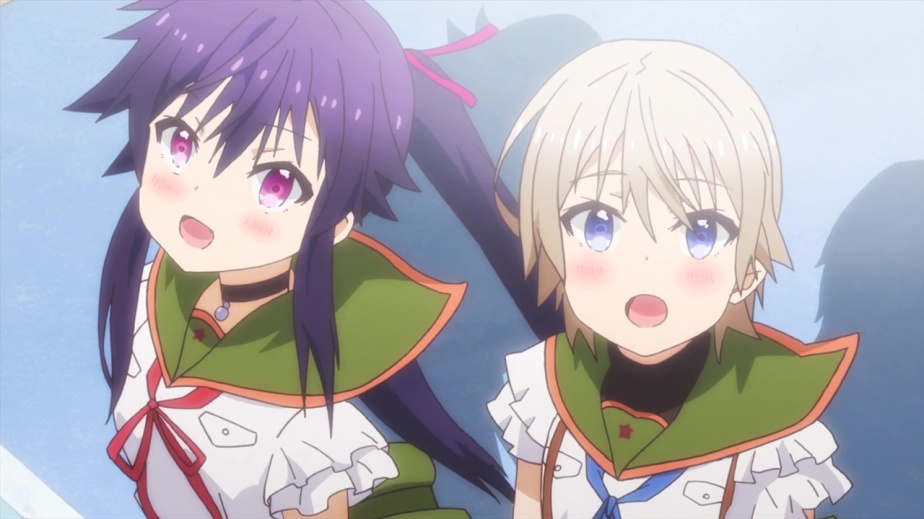