Summary: Amatsuki Meguru has always wanted to be a hero ever since she saw two mysterious ladies rescue a drowning child. And after moving away from Chichi Island in order to start attending a private middle school, St. Cherine Academy (in Tokyo), she gets her wish granted when she becomes a Twin Angel. But it seems like her partner, Sumire, is not that enthused about being a Twin Angel.

“Enjoy” watching Sumire and Meguru come to terms with themselves as well as being partners as they attempt to confront and stop Mary, a mysterious lady who has been stealing energy from innocent people in the form of medals.

Review: A less than pleasant take on a traditional magical girl show. I would recommend staying away from this flawed show. 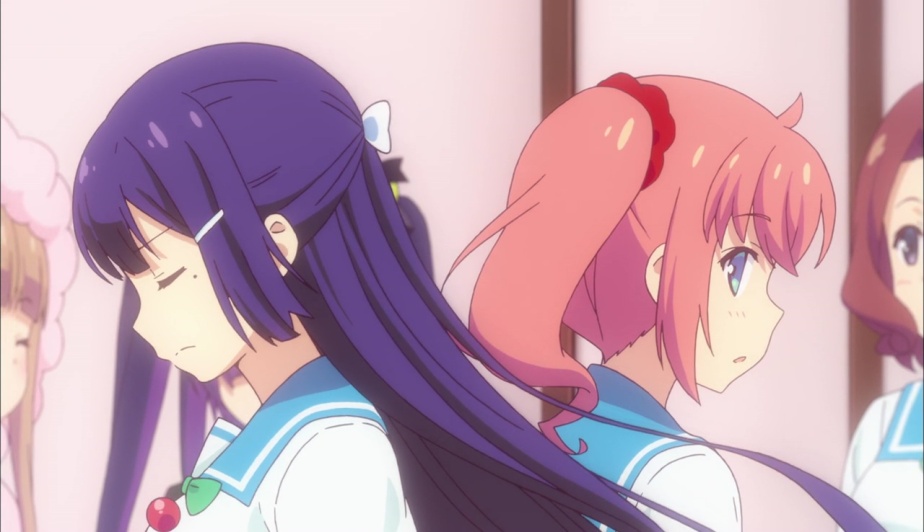 First of all, the story is a mess. Several episodes have far too little happening and the final episode feels rushed because it has way too much happening. And in my opinion, the writers of the show seem out-of-touch. One of the villains is either a college student or a college professor, for instance. And the writers thought it would be okay for said villain to enroll into a middle school in order to pursue romantic love. However, the whole setup is awkward, creepy, and simply bizarre. Strange developments coupled with irregular pacing makes for a disaster to watch. Not to mention how several characters get to cop-out from various setbacks and how there’s several loose threads that are never truly explained…

Outside of that predatory villain, I think the characters were rather enoyable. Despite being firmly entrenched in the typical cheerful girl with stoic girl archetypes, Meguru and Sumire are entertaining enough (more Sumire than Meguru, however) and both develop as characters throughout the series. Their circle of friends remained as mostly static characters but they were still fun to watch despite being relatively unimportant.

The show did the whole “turn villains into sympathetic characters” in regards to Veil and Nui. I won’t go into spoilers territory in regards to the details, but it was handled rather well despite dominating the story for several episodes. I wish the same could be said for Mary. We found out about her goals relatively soon, but she remained just some smug source of fanservice who never explained her reasons behind her aspirations.

There are plenty of references to an older series since this is technically a sequel to the original Kaitou Tenshi Twin Angel: Kyun Kyun☆Tokimeki Paradise!! series that aired in 2011. Yeah, try saying that three times fast. Be that as it may, I think the anime can stand alone since viewers are filled in. I didn’t even realize that this show was a sequel into three episodes in so yeah. I’m not sure if this series captured the spirit of the original, however.

The animation was rather lackluster in several situations (particuarly the battle scenes). Not much to say about that.

At least the OP and the ED are not horrendous? The OP also pays homage to the original source material of Kaitou Tenshi Twin Angel: Kyun Kyun☆Tokimeki Paradise!!, which is a slot machine.

As for the yuri, it’s delciously thick between Meguru and Sumire as well as Meguru and Veil. I don’t have complaints in this regard at all. It’s really misleading of me to include the following picture right after I talked about yuri since Sumire is actually fangirling over her older brother in this instance, but it’s amusing to see the stoic girl act like this and this is how I felt whenever Sumire and Meguru had moments.

Despite the excellent chemistry between Meguru and Sumire (as well as Meguru and Veil), I can’t really recommend Twin Angel Break. While some shows does well with the zaniness factor, this show is not one of them and comes across as being more of an uninspired, bizarre mess. At least the characters are sort of enjoyable. Namely Sumire, who kept the show fun to watch. But that can only go so far. There’s definitely better mahou shoujo series out there, such as Puella Magi Madoka Magica or Yuki Yuna wa Yusha de Aru.