Ballroom e Youkoso has generally been well-received thus far. Despite closely following the shounen narrative, which features a male outcast struggling to find a purpose in life, the series is able to demonstrate a nuanced understanding of tone through its handling of drama and comedy. The emotional moments aren’t overly eclipsed by the comedic bits, which in turn provide relief after the numerous tense situations.

Yet Ballroom e Youkoso is unable to thoroughly escape the typical downfalls of the shounen narrative, which include less than satisfactory depiction of female characters. Shounen series frequently fall into this snare and Ballroom is no exception as of the current episode (episode 5).

If you want examples, then you need only glance at some of the more mainstream shounen series (which have already ended by now). Haruno Sakura from Naruto gets a considerable amount of flak because she doesn’t receive as much characterization as either of her Team 7 teammates. Inoue Orihime from Bleach is often rendered as a damsel in distress who waits by the sidelines.

With these two heroines in mind, it is easy to see why fans celebrated Uraraka Ochako’s conduct in episode 22 of Boku no Hero Academia. Since she wants to become a professional hero to make things easier on her parents, Uraka thus has a goal that’s independent of our male protagonist, Deku. Unlike Sakura and Orihime, Ochako is not a mere stageprop that is entirely reliant on male characters.

Unfortunately, the same can’t be said for Shizuku and Mako so far. Their characterization is minimal and viewers currently know little about them as a whole. Furthermore, they seemingly cling onto their partners, who are inevitably male. Everything we know about Shizuku as of yet revolves around either ballroom dancing or Kiyoharu, her dancing partner. The same goes for Mako since her current role has her partnering with Tatara in the hopes that she can improve as a dancer so her brother would accept her as a partner again. In other words, their personalities and importance in the story are overly reliant on male characters, which is the common fate to befall female characters in a shounen series.

And it should be noted that the characters only have words of praise for the male dancers. Female dancers are rarely, if ever, praised since the male dancers are considered to be the leaders who direct their female partners and who thus inherit the glory. Under such conditions, females are thus painted as being subservient or submissive to males. Be that as it may, ballroom dancing is an antiquated set of activities that utilizes traditional values to justify conduct (in other words, males must dance with females and males are expected to take the lead). Shizuku and Mako may become more developed and more independent later down the line, as well. But these are my observations up to the latest episode thus far (episode 5).

The behavior of one of the male characters, Sengoku, is also problematic. Not only does he aggressively grabs onto Shizuku’s clothes while shouting that she shouldn’t lose (which serves to humiliate her in front of her peers since he’s almost making her strip), but he also calls Shizuku a skank for deciding to pair up with someone besides Kiyoharu. To be fair, Shizuku’s decision is considered by all who are present to be bizarre and everyone had expected Shizuku to remain “loyal” to Kiyoharu. But Kiyoharu and Shizuku are not dating (so dancing with other people should be within the realm of reason) and Kyoharu has been negligent in communication for a while now, which of course frustrates Shizuku. These two reasons may not justify Shizuku’s choice, but they at least help explain her mindset. 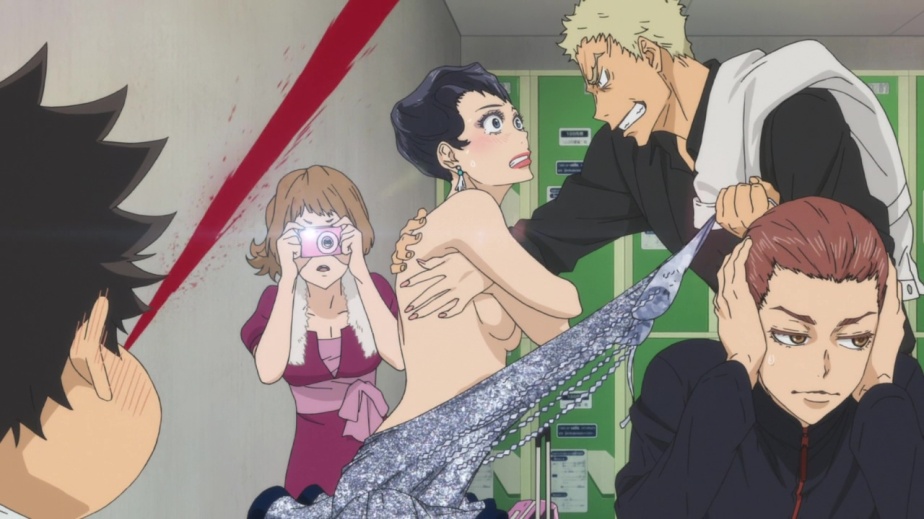 In short, both interactions are meant to be humorous (and the first instance is supposed to provide some fanservice), but it failed to deliver to part of the viewership due to its depiction of Shizuku and women in general.

But while Ballroom e Youkoso is proving to be disappointing in regards to its portrayal of women, it’s really up to the viewer to decide whether or not such instances will overshadow the series’ (excellent) execution and more positive qualities. Many shows frequently contain both good and bad elements, which makes delivering verdicts on said series to be rather difficult.

For instance, I consider the excessive fanservice, and the fact that a young boy and a young girl are involved with sexual activities, in Kobayashi-san Chi no Maid Dragon to be problematic. But the series also held genuine moments of family and love. In the end, I deem it a series that viewers should at least try to watch. Similarly, I would consider Ballroom e Youkoso to hold merit, but that could definitely change in the future. Again, this article only covers up to episode 5. As usual for these simulcast series, viewers will just have to sit tight and see if the positives outweigh the negatives.