If you’re feeling adventurous, go up to any anime fan and ask what makes an anime series engaging. Chances are you’ll hear many different answers. Some may say that fashion trends, from casual clothing to school uniforms, are what keeps viewers interested. Others may claim that having a relatable character is key.

But this post takes a different approach by talking about mindset. Seeing the thoughts that go on within a character’s head is one way for viewers to feel involved with the narrative. And unfortunately, Kakegurui has largely been underperforming in this regard through the mismanagement of limited information thus far (up to episode 5).

The series seems to be deadset on keeping the audience as passive and uninvolved spectators. I’ve been thinking about this for a while now, but The Anime Prince’s take on Kakegurui made me realize that I’m not alone here. Essentially, Kakegurui explains how players are cheating without giving the audience a reasonable chance at actually guessing how said instances of cheating occur by neglecting to effectively utilize stream of consciousness.

Think about how cheating during gambling has been handled thus far. We get nearly zero insight into Yumeko’s thoughts or mindset as she figures out how Mary has stacked the odds in her favor in episode 1. As The Anime Prince pointed out, we’re basically forced to believe that Yumeko is able to piece everything together, that she nonchalantly pulls out a hand-mirror, and that she is able to count up the number of observers during the match. The camera makes no indication that she is glancing at said hand-mirror (as far as I can tell) and the camera primarily focuses on the two contestants (so there are no panned-out shots to show the entire room. Then again, said room is very dark so that probably wouldn’t have helped). 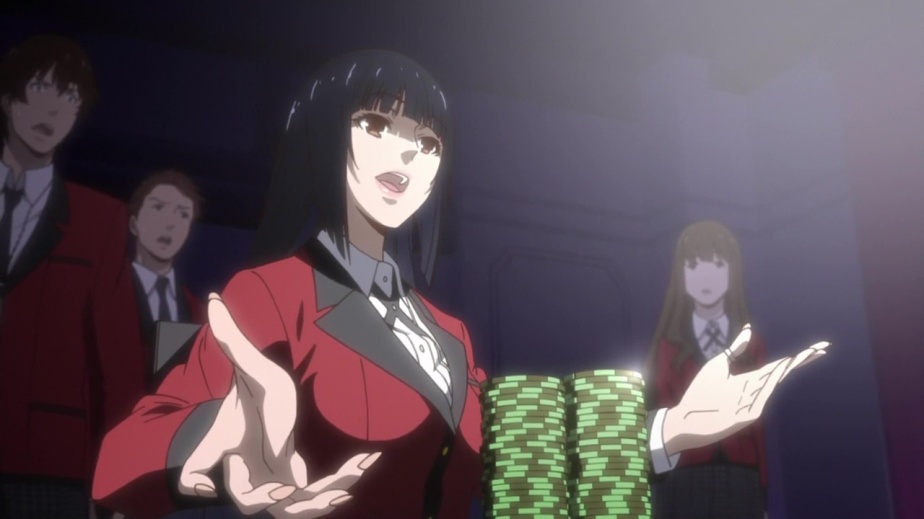 During said explanation, Yumeko elaborates that she noticed how Mary’s behavior changed depending on the round’s stakes. The series did show Yumeko alternating between betting big and betting small, but said scenes weren’t explained until Yumeko decides to let Mary know she’s onto her. The timing of this information makes the explanation seem tacked-on and the viewers, left with no prior hints, are forced to take her word for everything.

Similarly, the audience has very little chance at guessing how Itsuki rigs the card game in her favor until she reveals the trick via inner monologue in episode 2. As The Anime Prince noted, there are many potential ways to cheat at cards and we’re given no clues until Itsuki starts gloating in her thoughts! But much like in the opening episode, the timing of this reveal just so happens while Yumeko is pushing her advantage after playing dumb. Yumeko has somehow already figured out Itsuki’s tactics and the viewers, who were given no guidance, have no choice but to sit and simply watch her win willy-nilly. A similar situation happens during episode 3 since it is revealed that just one of the swords is magnetic during the final gamble of the episode. Prior to Yumeko’s speech, viewers once again weren’t given any sort of clues to latch onto. 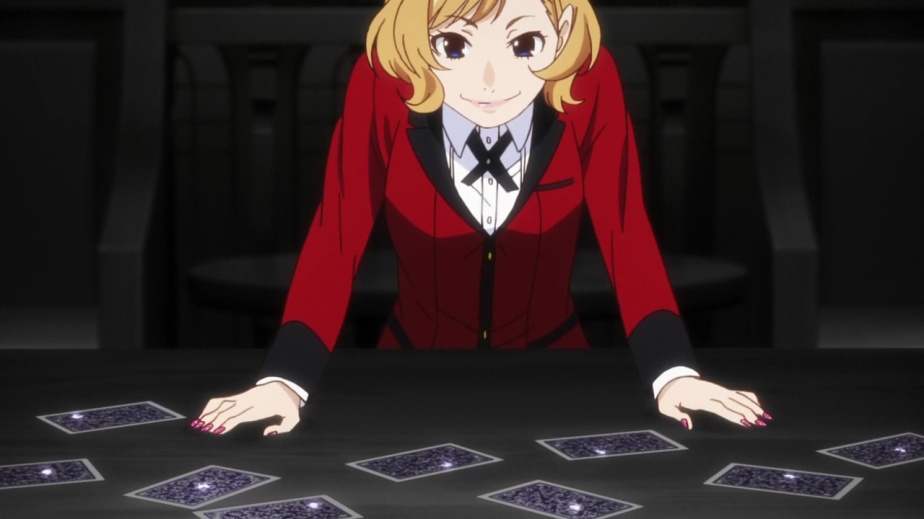 Episode 5 strays from this model since the camera framing, as well as the characters’ line-of-sight, allows the audience to actually guess at the primitive system of cheating Jun and Nanami are using before it’s revealed (perhaps the audience is given a chance to realize what’s happening precisely because it’s an overly obvious means of cheating). We also get to see Jun (once it’s revealed that everyone at the table is cheating) desperately try to reason out what sort of cards Yumeko and Mary are holding.

Excluding episode 5, there’s a reoccuring trend in Kakegurui in which the audience feels isolated from the gambling because the players’ mindsets or reasoning are not divulged until the match is at or near its end. We are forced to have everything told to us and we are then forced to accept it. Since gambling involves limited information (Yumeko doesn’t know what kind of cards Mary had and vice versa; Itsuki and Yumeko theoretically shouldn’t know which cards pair up with which cards, etc), it’s essential for characters to consider these unknowns and attempt to reason out such factors unless they’re blindly relying on luck, another key component of gambling. And to be fair, Yumeko does let luck at least partially decide the results. However, she also uses her brain to read her opponents. Be that as it may, we’re consistently only shown the destination of such analysis – the journey is never included.

As for episode 5, the audience is subjected to a different sort of limited information – the rules of the game the characters are playing! The audience is left to infer and figure out the specifics, which I found to hamper potential enjoyment of specific moments (and the episode as a whole). There was simply a lack of adequate explanation, which caused the viewer to feel confused as well as uninvolved. But at least we got to see a bit into Jun’s thoughts.

As such, Kakegurui falls short at actually involving viewers. If I were to bring up an anime series where limited information is handled in a better fashion, then I would have to nominate the Saki franchise as an example. I’m sure some of you are scoffing at the comparison. True, Kakegurui has the participants cheating whereas Saki features unrealistic supernatural powers instead. Furthermore, the girls in Saki are not gambling when they play mahjong unlike the students in Kakegurui when they play their gambling matches.

That being said, mahjong was traditionally a gambling game and the same aspects of limited information, as well as luck, is present. When it comes to mahjong, players are forced to attempt to deduce opponents’ hands through the tiles they discard or call upon. This aspect of this particular board game is frequently shown by letting the viewers see the mental theories and conclusions characters formulate throughout matches and games (to be fair, only some of the more careful players think about such things – other characters just focus on their own game without considering their opponents’ plans for better or for worse).

In other words, the viewers feel included in the game and series because they can actually see the thoughts of characters. As a result, the characters’ decisions are explained, which in turn allows viewers to understand how and why the game is progressing in such a manner. The rules are also static since Saki is firmly entrenched in tournament arcs, so there is no room for the viewer confusion that was present in Kakegurui episode 5. 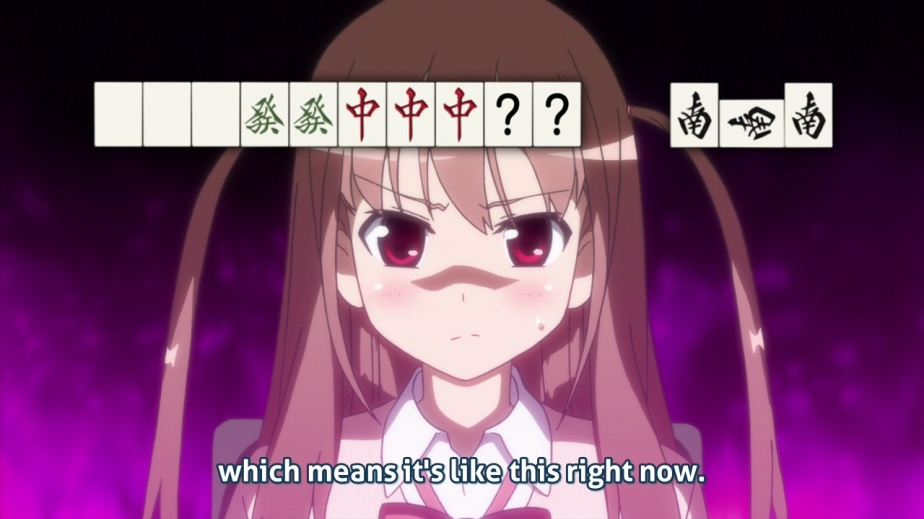 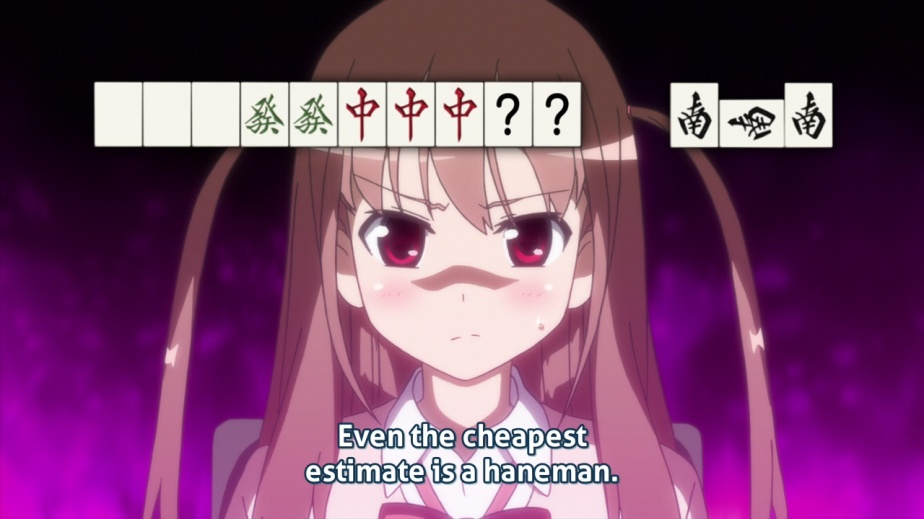 I might be biased considering my love for Saki, but I do believe that Kakegurui could take a few hints from the aforementioned series. As it stands, viewers are outsiders who simply watch Yumeko and others make extremely exaggerated faces.

24 thoughts on “Why Kakegurui Falls Short at Engaging Viewers”