There’s something special about the concept of immortality.

The possibility of living forever (barring special circumstances) is often depicted as intoxicating in fiction. Convinced that living forever would solve all of their problems, men and women chase after such an ability and usually end up suffering for their efforts. And while an motivated individual does manage to achieve immortality on occasion, often times it’s an imperfect deathlessness.

But how many stories actually explore the limiting conditions in regards to eternal life? What about the different types of immortality that might pop up within a narrative should they exist?

On that note, UQ Holder! attempts to tackle this issue by featuring a plethora of immortals who still have to deal with various drawbacks. Contrary to popular belief, being immortal does not make one omnipotent by default. Sadly, the juicy tidbits in this matter have been largely left out in the anime adaptation.

So let me try to fill anime-only viewers in! Expect some spoilers!

Now, it seems like most immortals in UQ Holder! simply do not age significantly. Some might develop slightly before being “locked in,” but most of them end up looking the same despite living for several centuries. As a result, the implications feature both downsides and upsides. If you “turned” before you hit puberty, for instance, you’ll probably be stuck looking like a child for the rest of your eternal life. That could be an advantage or a disadvantage depending on who you ask, of course, but I digress.

So the fact that all immortals in UQ Holder never change in physical appearance (outside of using drastic measures such as the magic pills seen in episode 2) is a given. This particular category, however, is meant for one particular immortal in UQ Holder (the organization full of immortals and demi-humans). That would be the one and only Shishido Jinbei, who was introduced in episode 3. 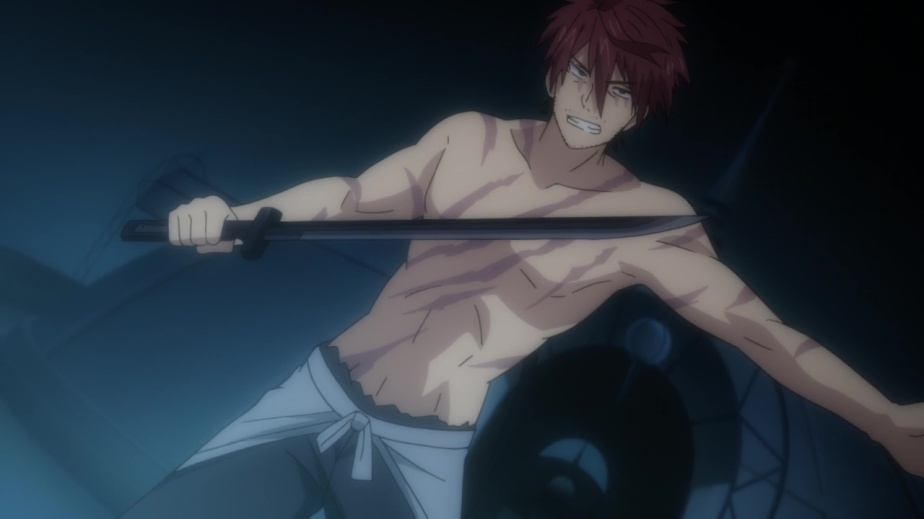 As mentioned earlier, the anime adaptation has already skipped through a lot of things and that would include most of Jinbei’s interactions with Touta and Kuroumaru under the base. As such, anime-only viewers never get to find out that Jinbei became an immortal from eating the flesh of a mermaid. Jinbei thus never ages, but he still would die if he suffers any wound that would incapacitate a normal human. Furthermore, his body is a mess of old scars because his regeneration is pretty much like that of a normal person’s. In other words, Jinbei only received the basic immortal kit and is just a fragile person who simply won’t die from natural means like old age or organ failure or so on.

Yet this man is considered the de-facto leader of an organization filled with powerful immortal members and has survived for 1400 years through sheer skill and experience. What a badass.

A Stockpile of Lives

In order to join UQ Holder, Kuroumaru had to pass a contrived test by landing a single hit on Makabe Gengorou in episode 3. Kuroumaru manages to land a fatal blow on Gengorou, but it turns out that Gengorou has a large number of lives and that he loses one whenever he dies. I imagine he will also live forever if he wasn’t involved with combat. On the other hand, it’s likely that he’s dead for good if he runs out of lives. The character has remained relatively underdeveloped in the manga, so I have to hazard a few guesses here.

…What if he gets discouraged with living and presses NO? Is that it for him? Hm.

EDIT: It looks like he has a “gamer” aesthetic since he has multiple lives and can analyze the experience of his opponents. Very interesting.

It sounds blasphemous, I know. But that’s basically how Karin’s immortality is explained in the manga. A higher deity loves Karin so much that He simply doesn’t allow her to die. It’s a very strong type of immorality and, as Yukihime notes in episode 3, it’s likely she’ll live on until the end of the world. Karin takes the revelation rather well!

She does, however, experience pain, so grappling with her or using a vibrating knife will put her at a disadvantageous spot.

It remains to be seen if anime-only viewers will get to learn more about Karin’s situation by the end of this arc or if the details will get swept under the rug once again.

As noted in episode 4, Kuroumaru has a high rate of regeneration that allows Kuroumaru to shrug off most attacks if Kuroumaru is given enough time to recover. The specifics were mentioned during the manga exclusive scene where Touta and Kuroumaru interact with Jinbei while they’re all underground, but it turns out that Kuroumaru became immortal though experiments and that Kuroumaru can regenerate parts even if the parts are still lying around and not destroyed. I imagine holding the original parts to Kuroumaru’s body speeds up the process, however.

In any case, Kaito figures out the nature of Kuroumaru’s immortality during episode 4 and opts to overpower Kuroumaru through sheer attrition.

We all know what this type of immortality entails. Eternal youth, sharp fangs, gets weakened by crosses, etc. All of these traits apply to Touta as seen in episode 4 when he is defeated by Kaito.

Yukihime / Evangeline, however, seems immune to the traditional vampire weakpoints. The original source material for the prequel, Mahou Sensei Negima!, mentions that she managed to overcome these disadvantages somehow, admittedly. And it turns out that vampires can’t regenerate their body parts if the detached parts are still around, which could potentially lead to some sticky situations if the vampire’s opponent is tricky enough.

To be honest, Touta’s immortality isn’t actually due to him becoming a vampire, but the true nature of his immortality entails some extreme spoilers. If you just want a hint, then just consider it hereditary and skip this next section. Spoilers ahoy!

Like, seriously, some major spoilers are coming up right now.

This was what caused Negi Springfield, who is Touta’s grandfather, to become an immortal near the end of Mahou Sensei Negima! Magia Erebia was originally a technique that Evangeline / Yukihime developed while she was still weak and entails the user absorbing magical spells into their own body in order to gain the properties of said spell. In exchange, however, the spells fuse directly with the caster’s soul.

Negi overused this ability in order to bridge the wide gap between him and his opponents (as well as to chase after his father’s example) and ended dying and then reviving since he was related to a specific royal family due to his lineage. Basically, it’s a case of shounen protagonist privilege popping up.

Now, how does that tie in with Touta? Highlight the following paragraphs to see what I’ve written! Last warning for spoilers!

Well, Touta is actually a clone made from Negi’s DNA as well as Asuna’s DNA. For those of you who can’t remember, Asuna is the girl who got angry after Negi’s magic sneeze in the opening clip of episode 1 for UQ Holder!

So in other words, the true source of Touta’s immortality is actually Magia Erebia. And he also happens to have Asuna’s latent ability, Magic Cancel. The two powers clash against each other and he’s left unable to use conventional magic as shown back in episode 1.

This also serves for an explanation for Touta’s abnormally quick progress. Multiple characters have remarked on his keen reflexes in battle as his ability to pick things up rather quickly. It turns out he’s drawing from Negi’s DNA and he’s been given a bit of a shortcut. Finally, a shounen series that at least tries to epxlain why a protagonist seems to be the chosen one. Be that as it may, Touta ends up facing additional limitations due to his conflicting nature of his abilities, but I’ll leave that for another time. 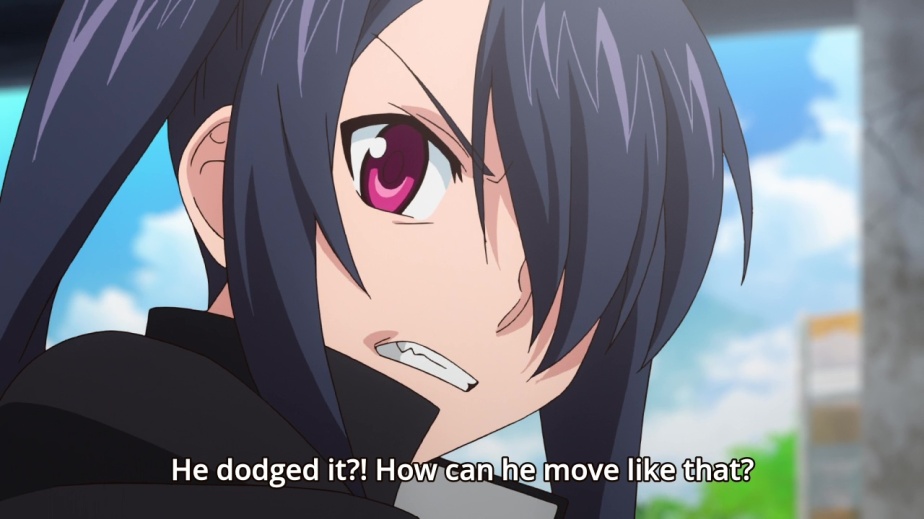 Other Types of Immortality

Later on, we get to see an individual with a savepoint type of immortality. In other words, she basically sets a savepoint and if she dies she teleports to another dimension and continues from the same place and time where she had “saved” her progress. It’s rather like a video game.

Implications of Immortality in a Shounen Narrative

There are some complaints that it’s dreary for Touta to unlock a specific power so early on into the series (he’ll tap into it during the next episode for you anime-only viewers). After all, Negi only mastered said power towards the end of Mahou Sensei Negima! and it almost feels like the consequences of immortality isn’t as big a deal anymore since there are so many immortals running around now. Touta’s now surrounded by tons of people who happen to be immortal, excluding the muggle waitress and his village friends, so he doesn’t really have to worry about outliving them.

Well, it’s just an obvious direction for a sequel to an action series to follow, to put it bluntly. Things have to escalate to keep viewers engaged. Otherwise viewers will be left thinking, “Oh, this happened last time so why should I bother watching this?”

The fact that most of the characters are immortal still adds tension, as well. As shown in episode 4, there are ways around immortality and immortals can still die. As a result, characters end up getting involved in these messy battles where the limits of humanity are constantly tested and exceeded. Adrenaline junkies, eat your heart out. Well, don’t, actually, unless if you’re immortal.

I wish the anime adaptation had kept a minor conversational exchange from the first chapter. Touta and his friends talk about how jellyfish are effectively immortal and yet they can still die. That sets the tone for the series proper, in my opinion.

UQ Holder is a pretty dumb name, yes, but did you know that UQ phonetically sounds like yuukyuu (悠久) which means eternity?

In short, I wish that UQ Holder! would focus more on the fact that so many of the characters are immortal. It’s something that’s rather unique to the series, but it’s being brushed aside for the sake of getting to the action in an expedited way. Later on, the series explores how some immortals are effectively bored with their lives and all, but it seems like the series is choosing to focus on Touta’s immortality by repeatedly clipping in scenes from Negi’s past into the series. Meanwhile others, such as Jinbei, are pushed to the side. It seems like they sort of fleshed Gengorou out in the anime in exchange, however. I’m just saying the anime series should consider slowing down a bit so the other characters aren’t left underdeveloped.

Ah, well, Touta isn’t a boring character, so I don’t think it’s too bad that they’re choosing this route…

11 thoughts on “Different Types of Immortality as Seen in UQ Holder!”