There’s a widespread sickness within the anime community.

Well, there are actually several issues. We’ve got problems, Houston. But the topic I want to specifically address is the misuse of the word, “rip-off.” Too many fans are overly quick to dismiss a series as a knock-off of another if there’s even a passing resemblance.

Last week, Shokamoka wrote an article about Anime-Gataris in which he seems to have quoted some disgruntled viewers:

“The show is just downright mass plagiarism. The best it can do is to alter the names of stolen works to do around the copyright system in Japan.”

Talking about this issue wasn’t the point of his article, admittedly, since he was more keen on discussing the three episode rule and how Anime-Gataris relates to it. There’s no need for you to worry, however, since I’m choosing to explore this particular subject. Actually, maybe you should worry.

At any rate, it seems to me that there are a few things these people are forgetting to consider. At least four factors pop into my mind immediately. Let’s take it from the top!

1. They Don’t Understand the Concept of Parodies and Homages

Shokamoka’s quote reminds me of a particular page in Gamma‘s afterword that was written by the author. For those of you who aren’t in the know, Gamma is a superhero manga that features a considerably large cast of superheroes. The thing is, a lot of the characters resemble iconic American comic book heroes. Some moments in the manga are rather similar to those seen in the recent movie adaptations, even.

However, all of that is intentional and the author had purposefully made said characters and events similar to the ones seen in superhero comics and movies. And yet many people had the gall to claim the author was plagiarizing or that the author was ripping off other people’s work.

It’s sad, really, that the author needed to explain the definition of parodies and homages to readers. 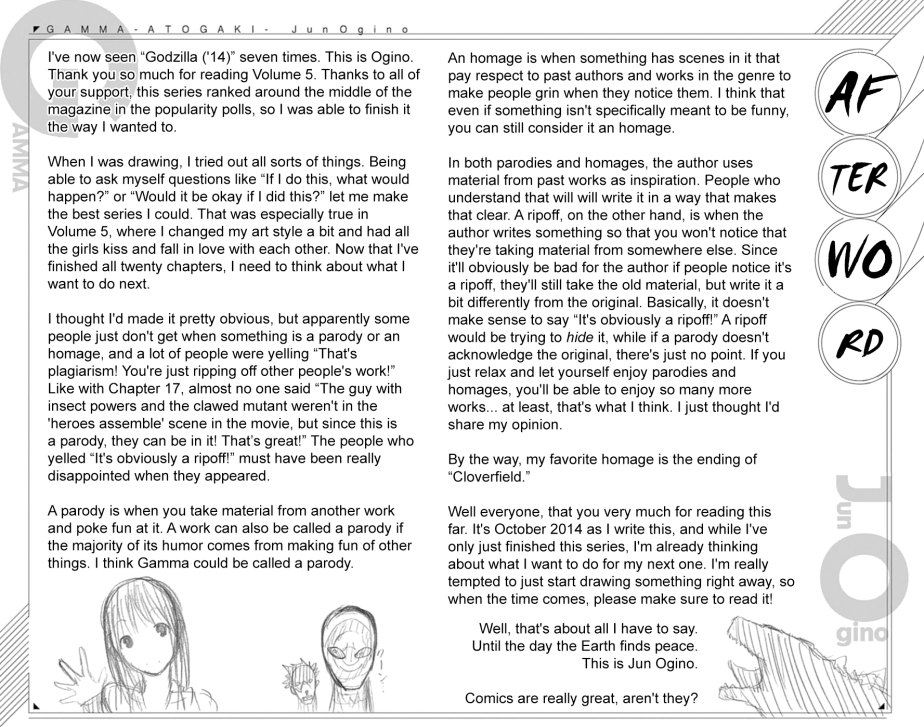 For those of you who don’t wanna bother reading all of that, a work can be called a parody if “you take material from another work and poke fun at it…[or] if the majority of its humor comes from making fun of other things.” As Ogino Jun said, Gamma should be considered a parody since some of the iconic scenes the series references are decidedly less serious and more humorous. It’s a matter of tone, folks. If you grasp the tone, then you can grasp the intent!

According to Ogino Jun, “an homage is when something has scenes in it that pay respect to past authors and works in the genre.” In other words, it’s a way for authors to stand on the shoulders of giants. Paying tribute to older works or authors is a sign of respect and not of bankrupt morals. So stop throwing around baseless accusations!

2. They Don’t Understand Anime is Often Filled with References

I’ll be honest. When I heard people primarily describe Anime-Gataris as some swirling mass consisting of excessive references, I wasn’t really sold. After all, I can pick up any ol’ slice-of-life series and see reference after reference pop up. That’s because throwing in references is a staple in humor for said titles. Many anime series will opt to reference famous scenes that can serve to make the scene even funnier if the audience notices the tribute. If not, the scene will still (probably) make sense. It’s like when Disney sneaks in a line that is funny for the kids but is actually even funnier for the adults because the line can be interpreted in a suggestive way.

Anime-Gataris, by the way, isn’t just defined by references. Admittedly, the tributes are certainly memorable since so many popular titles are being brought up. Given that this is an anime about anime, these “meta” moments where the fourth-wall is shattered into tiny pieces are bound to happen. Be that as it may, the series is actually about long-time anime fans (as well as newcomers to anime) discussing exactly what makes anime worthwhile. They make disagree with one another about the specifics, but they all share a passion for anime.

The premises is not exactly original, but I’m having a fun time watching Anime-Gataris because it’s so sincere. Like how Shokamoka mentioned in his article, no one writing about “special powers battle anime” really brings up the genre’s merits. They don’t talk about how said stories typically feature the weak rising up against the tyrants in the name of justice or friendship. They instead choose to claim a series is “cliché” or “generic.” As a result, discussion regarding said series is predominately negative and / or defensive. Well, this is certainly funny coming from me since this article is primarily accusatory, but hopefully you get my point.

3. They Obsess Over Originality

Several months ago, Karandi posted an article where she asks if there are any new ideas for settings, characters, etc left and if it even matters. She didn’t take a stance, mind you, but she did point out that some people seem fond of pointing out that Series A is just like So-and-So except for this-and-that.

I’m of the opinion that it’s not necessarily bad if a series follows the basic conventions of its genre. Sure, it can be considered boring by doing so. But what’s more important than superficial similarities is the execution. A supposedly generic story that sticks to the basics and doesn’t wander from the tried-and-true can be considered a miracle in storytelling if it knows how to make use of the hand it’s been dealt. Whether or not a story succeeds in that endeavor is definitely reliant on personal preferences, however, since one individual may consider one aspect of the story to have been handled well while another individual may beg to differ.

4. They Oversimplify to Make Things Convenient

This is a consequence of the modern era. Everything’s considered better if it’s miniaturized or condensed. We live in a fast-paced world where brevity is wit and free time is gold. Long-winded thinkpieces can and are enjoyed at times, but many individuals much prefer content that cuts to the chase. Succinct summaries and concise reviews are usually more ideal as we attempt to seize the day (by watching anime).

As a result, a lot of details can end up being left out of such abridged content. That’s the only way someone can even consider Yuuki Yuuna wa Yuusha de Aru to be a “knock-off” of Puella Magi Madoka Magica, in my opinion, unless if they’re trying to make an ignorant statement. “Oh, they’re dark magical girl series and the main character’s theme color is pink. Guess the one that came out afterwards is a rip-off!!”

First of all, using “dark” like that is so vague and meaningless. It’s not like you’re running out of room while writing on a Post-It note, so you had better be ready to elaborate on what you mean by “dark.” Otherwise, I’ll just think you’re clinging onto buzzwords in an attempt to sound smart. Secondly, so many magical girl series feature protagonists who prefer the color pink. Just because Madoka is the most notorious magical girl series in recent times doesn’t mean the series should automatically serve as the standard of newer magical girl anime.

Thirdly, the pacing between the series is completely different. While Madoka includes a few funny moments here or there, the tone of series remains grim after the first few episodes. On the other hand, YuYuYu opts to include at least one episode per season where the girls get to relax and not stress about their nebulous opponents. And yes, episode 3 of Yuuki Yuuna wa Yuusha de Aru: Washio Sumi no Shou does serve a purpose since showing them goof off was the quickest way to establish how the magical girls are when they’re relaxed and how they’ve developed compared to how they were in the opening episode.

At any rate, condensing summaries and reviews is definitely a benefit in some aspects, but is surely a detriment in others. If one goes too far, one can end up comparing One-Punch Man to Boku no Hero Academia when one is basically a gag comedy where the main character is already strong while the other serves as a coming-of-age / origin story for the main character. The only similarity is both series feature superpowers. That isn’t really something to make a big fuss about since it’s like saying that a crimson apple is like a slab of raw meat because they’re both basically red. In short, they’re simply too different to really be compared in a meaningful way.