2017 is already almost over. Can you believe it, folks?

I forgot to do this for last month’s post, but here are the top 5 most popular posts during the month of October! 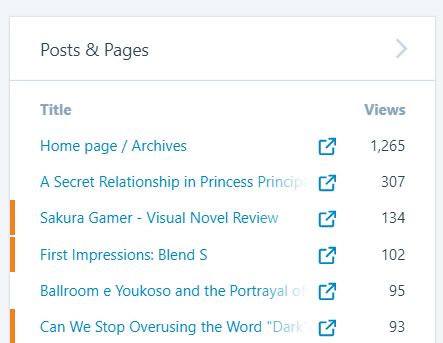 It’s amazing how so many people are still curious about Princess Principal. To be fair however, the series was definitely one with flair and style. I have a feeling many people will continue looking into it for months and years to come. As expected of one of the best titles in Summer 2017!

Sakura Gamer came out relatively recently, so there are no surprises here. I need to review more visual novels, actually. For the kids! Well, maybe not for the kids considering most yuri visual novels end up being quite stimulating…

I don’t write for that website anymore, but it seems like Blend S generated a fair amount of interest when it first premiered. I doubt it’ll actually feature decent content, however. Wait, I’m supposed to be talking about Blend S here! I meant the series will probably not feature yuri!

Oh, the piece I wrote about Ballroom e Youkoso is still trending, huh? Some things have slightly changed after some developments and after the series started its second cour, but I still stand by the things I’ve written in that article.

Another instance of me obsessing over language made it into the top 5. What a shock! The influence of George Carlin, perhaps. A good friend has been showing the piece some love by linking it in her posts, too. Thank you!

Now onto this month’s announcements!

Said good friend also pointed out that I’m not really writing enough about yuri content to be really considered a yuri blog. I had also noticed this a few months ago, but I figured it was okay to focus on more seasonal content given that I had my hands full with episode reviews. However, the general lack of quality yuri content, coupled with an increased amount of free time due to various factors, has led me to wanting to write more yuri content. Coming up with ideas for posts that could be considered yuri is harder than just writing about this-and-that for current shows / anime trends / random thoughts, admittedly. But I’ll be aiming for a 1:1 ratio!

I’ll try to review even more this month!

Miscellaneous Projects (What a Mystery)