ebi-hime’s newest visual novel was released last week. Does her latest work live up to the hype?

Lewdness:  3/3 (Lewd – Passionate Kisses, Several Explicit Scenes) [with the 18+ patch installed – you can download that here]

Review: Just like blackberries, this kinetic visual novel is both sweet and tart. A few aspects are left to the audience’s imagination and interpretation due to the game’s sharp focus on the main couple at the side characters’ expense, but Blackberry Honey remains a pleasant game that provides closure as well as warm and fuzzy feelings.

The aforementioned main characters are Lorina Waugh, the newest maid to be employed at Bly, and Taohua, the mysterious parlor maid who’s quite a few years older than Lorina and who is commonly thought of as a witch due to her unusual complexion, eye color, and name.

I suspect some players may initially dislike the main characters. Personally, I wasn’t a fan of Lorina’s initially snappish behavior towards Taohua at first since Taohua hadn’t really meant Lorina any harm. Taohua’s conduct towards Lorina later in the story may prove to be off-putting for some, as well. But players need to keep in mind that the best sort of characters are usually the ones who are flawed. A sense of realism is imbued when they struggle and make mistakes and regret their actions.

And eventually, the girls’ pasts are revealed and their earlier actions and thoughts are thusly justified, if not excused. It’s easy to see why Lorina is distrustful of a stranger’s kindness and it’s easy to infer why Lorina values freedom and dislikes being told what to do. Lorina and Taohua may not be perfect, but I do like how the two ladies are able to gradually develop as individuals through their bond (which also evolves throughout the story). Love shouldn’t immediately solve everything, but having someone to depend on certainly makes things easier. Ah, I said something similar about the main couple in Octave.

Nevertheless, what I’ve said about their relationship applies because Blackberry Honey portrays a realistic love, which is much appreciated. In other words, they don’t fall in love at first sight. In fact, Taohua and Lorina are off to a rocky start at the beginning of the visual novel since Lorina is convinced Taohua is scheming around her while Taohua does sort of toys with Lorina out of morbid curiosity. But eventually both girls realize each other’s strong points, which leads to them getting closer, Lorina feeling confused about her sexuality as well as being worried about the sincerity and depths of Taohua’s affection, and so on. It’s a tumultuous time for both women and it mirrors a more realistic relationship where two lovers are a bit uncertain about the specifics of their situation instead of a more idealistic scenario.

The fact that Blackberry Honey takes place during the Victorian era also helps when it comes to the homophobic lines (that are uttered by side characters) which typically accompanies yuri visual novels. Such developments can seem overdone or orchestrated to inject some easy drama into a story, but such sentiments were probably incredibly widespread at the time. In fact, some of that nonsensical “traditionalism” is alive today, unfortunately. Essentially, the setting of Blackberry Honey makes the scenarios seem more authentic and an actual obstacle the girls have to worry about considering that Lorina is just a lowly maid who could be fired for any sort of petty reason. The same goes for the religious guilt Lorina feels over her “sinful” behavior when it comes to her interaction with Taohua as well as the blatant racism poor Taohua experiences from others.

While Taohua and Lorina really grew on me as the story progressed despite my initial misgivings, the same can’t be said about a few specific characters who got me infuriated with their conduct. They provide a considerable amount of conflict within the story since that’s their role, but they (being the two older maids Pauline and Isobel) surely were wicked beyond belief. The other spiteful character would be Constance, the 12 year-old daughter of the Lennard family, who is probably the biggest brat I’ve ever come across in fiction. That being said, we’re given some insight as to why she behaves the way she does and I’m left wondering if she was merely lonely and depressed over how the one person she loved was forced out. Perhaps she also held feelings for Lorina considering how she specifically picks on Lorina. A few key moments sprinkled throughout the story gives me that impression, as well. If that’s the case, then she really is a pitiable and complex girl.

As for the other characters, there are two governess with minor roles (one was kind yet meek while the other was overly straight-laced) as well as three other maids (Ada, Effie, and Liselotte), two specialists who repair instruments (Theodora and Emilie), and a cook (who plays a relatively minor role outside of doting on Liselotte). They’re all charming and layered characters, but I’ll leave it at that to avoid excessive spoilers. As a yuri shipper , however, I’m very suspicious of (and pleased with) Effie’s closeness with Liselotte.

There’s an Extras menu option after you complete the game and Blackberry Honey doesn’t disappoint. You can check out the Gallery option to admire the CG, enjoy the lovely original soundtrack in the Music option, replay entire scenes by accessing the Memories option, and read ebi-hime’s thoughts on the game as a whole. 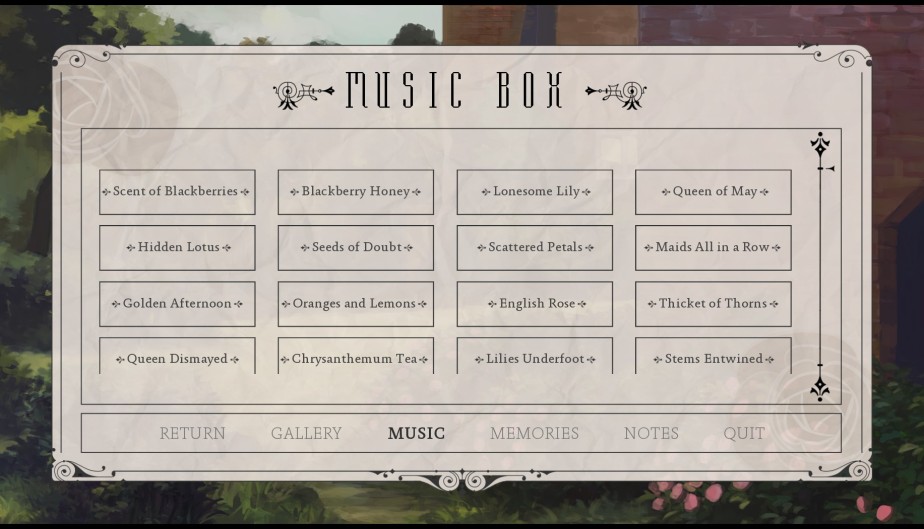 I feel obligated to point out that the OST contains 18 unique songs and includes yuzuki’s thoughts (the composer) on each individual piece, which is very enlightening. ebi-hime also chimes in with her reasoning behind using specific classical songs. I wish more visual novels followed suit!! I was also caught off-guard by the beautiful opening song, “Blackberry Honey” (Saki nailed it with the vocals). Needless to say, I’m in love with the OST and I happily purchased the DLC so I can repeatedly listen to the OST while I’m away from my laptop. I really enjoyed how the scenes had such cute and catchy names, too. While I’m at it, can we take some time to appreciate how fancy and detailed and cute the UI is with the swirls and flowers and patterns?

As for the racy relations between Taohua and Lorina, the audience gets a front-row seat to a handful. According to ebi-hime in her Notes option located in the Extras menu option, said scenes detracted from the story and were originally less than sexy since the euphemisms Victorians used were rather ridiculous – “thatched cottage and “mossy treasure,” anyone? (By the way, I highly recommend fans of the game to look through the Notes option after completing the game. Again, very insightful and educational).  Therefore, the scenes were more like icing on a cake – a player can throughly enjoy the game even without the 18+ patch installed due to the wonderful writing. That being said, I do believe that ebi-hime did a good job making said moments tastefully sensual. The desperateness, the strong character dynamics, the feeling of giving in to pleasure and a beautiful woman – all of that is captured and then some! Thankfully she didn’t opt to include over-the-top metaphors unlike some writers. Well done!

As I mentioned earlier, Blackberry Honey is a kinetic novel. Some players may consider this to not truly count as a visual novel since you don’t get to make any choices. However, the story is already full enough as is (although some bits are left unsaid) so I do believe such concerns are immaterial. However, apparently there were supposed to be multiple love interests (such as Ada, the portly, meek, loyal maid) at first! Still, I’m very content with the final product as a whole.

I only have two grips. Firstly, the length of the transitions between scenes seems an instant too long if kept on. However, turning them off sort of makes scene changes seem slightly too abrupt. I also think that some of the CG has Lorina and Taohua looking slightly different compared to other CG or how they’re portrayed as sprites. Both of these (very minor) complaints are definitely subjective, however.

All in all, Blackberry Honey is a character-driven narrative featuring a blossoming love between two maids. The two girls have to overcome a considerable age difference, prejudice, as well as homophobia in order to remain together. The visual novel is a solid example of a well-written kinetic novel that will leave you emotionally drained yet satisfied. Some characters may initially come across as being overbearing, but keep an open mind and try to understand them as they’re flawed just like actual humans. There’s a handful of well-written adult scenes, but the story is definitely strong enough to stand on its own without such engaging content. I really can’t recommend the OST enough!!

I know that the summary mentioned how the tale between these two girls featured music, but I’ll won’t elaborate on how that ties into the story due to spoilers.

In short, the answer to the first question I posed in the review is a resounding Y E S. Pick this one up if you’re up for stories set in a Victorian era and if you’re a yuri fan. Frilly dresses are hard to turn down, after all, as with quality yuri visual novels. 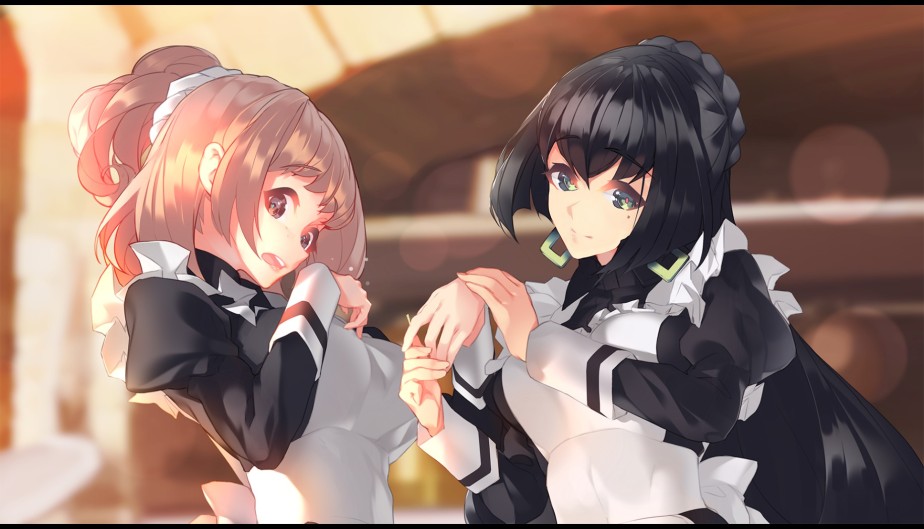