A few weeks ago, yuriperception mentioned a topic that intrigued me. It interested me to the point that I felt like I should discuss the topic of interest at least once (this particular post only skims the surface, admittedly).

I’m talking about the concept of ships that just won’t work out. That shouldn’t work out.

Of course, this is only my opinion. Some pairs can probably overcome these obstacles that I’m about to bring up. But they certainly make having a healthy relationship a bit more challenging.

1. One side is constantly angry or just cold

It can be nice when a character gets angry at another character out of worry. After all, it’s a way to show that the upset character actually cares for the other character after the latter has gone through a dangerous situation. Fine. Warm and fuzzy feelings all around, right?

Your mileage may vary, of course. But there’s a reason why some individuals dislike the Umi x Honoka ship. Although Umi does care for Honoka, she can only express her love (platonic or otherwise) by scolding her or by disapproving of Honoka’s poor choices or ideas. Umi ends up slapping Honoka hard (at least twice if my memory doesn’t fail me) and experiences no repercussions simply because she’s worried about Honoka’s well-being and because that’s the only way she can convey that anxiety. 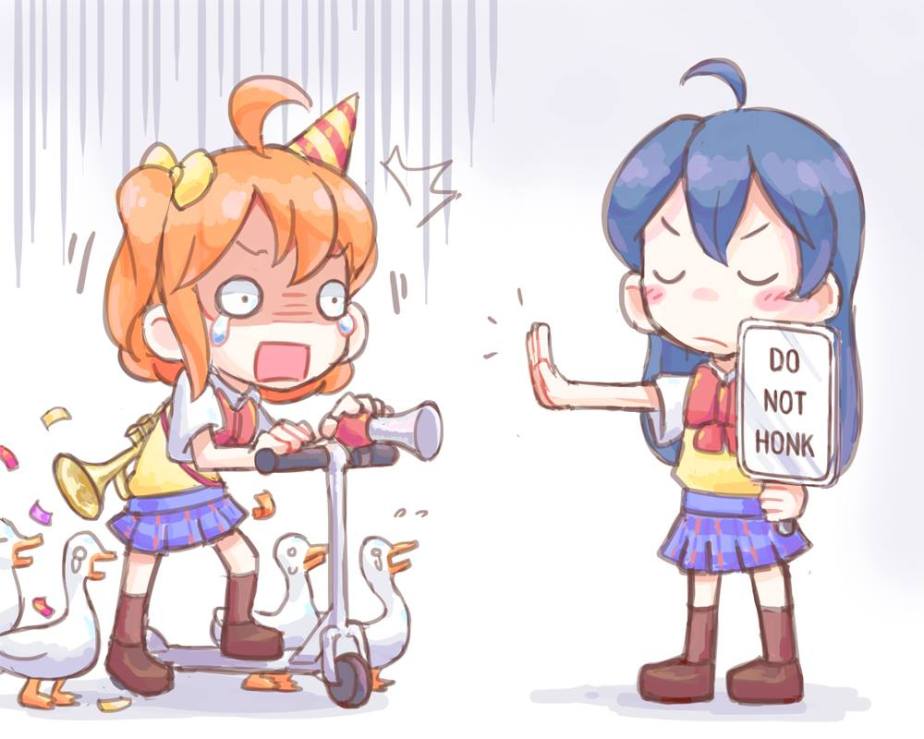 People also like the concept of a tsundere love interest, but when the amount of tsun overshadows the amount of dere to a significant degree, then there’s bound to be some confusion and hurt feelings. Kanata from Little Busters! is a wonderful example in that regard. She does care for her little sister, Haruka, but she’s been essentially blackmailed to mistreat her or else Haruka might end up being killed by their extremely messed-up family. As a result, Haruka only sees Kanata’s cold and harsh attitude, which causes Haruka to resent Kanata for many years until the truth finally comes out.

Well, it’s a way to establish that a character really likes the other character. Or that the groper is a tease who likes provoking the gropee. But it’s still a blatant sign of disrespect and disregard of personal boundaries and can be taken too far.

Mari x Kanan manages to balance this out fairly well – while Mari gets a bit too physically intimate for Kanan’s tastes at times (as seen when Kanan half-jokingly claims she’ll sue Mari for her misconduct), Kanan herself can return the favor. As a result, the behavior shared between the two girls is thus shown to be mutual and friendly (and flirty).

But, as yuriperception pointed out, the same can’t be said for Kuroko x Misaka. Kuroko is too aggressive and her hands-on approach is not appreciated by Misaka in the slightest. Despite Misaka repeatedly demonstrating that she dislikes and is uncomfortable with Kuroko’s antics, the assertive girl continuously sexually harasses Misaka. This is definitely not mutual and not exactly healthy, which makes supporting said ship difficult.

I’m probably going to get some heat for this, but the current behavior between Chise and Elias cannot be considered romantic in my book. Elias admits that he claimed she is family to him because he knew those were the words she desperately wanted to hear during episode 6. Essentially, he was just saying the words she wanted to hear. But since Chise is so starved for affection, she accepts said words and doesn’t resent him when the truth comes out.

Because to her, any sort of attention is fine. Even negative attention is still attention and is thus acceptable. And this is something that a lot of anime characters (and shippers) seem to believe. Think of all the class clowns that mess around in order to be scolded and punished (*cough*like Naruto*cough*). Such behavior is often demonstrated by lonely individuals who are, simply put, desperate.

As a result, Elias’ behavior can only be interpreted as manipulative. I’m not sure if the fact that he doesn’t really understand human behavior or rationale helps his case here. But it does establish that his sense of morality doesn’t necessarily align with human values. I wouldn’t be surprised if he does something that is decidedly evil in an attempt to keep Chise dependent on him. If that were to happen, would that be considered romantic? Would Elias get a free pass because of his lack of understanding human values?

There’s a lot more to say about this subject, but I’ll cut it short here.

Do you have any “red flags” when it comes to shipping? I’ll love to hear about it in the comments section!