Amidst the yuri developments and the spooky otherworldly antics, Konohana Kitan has been candidly exploring what it means to be responsible and to fulfill expectations.

Satsuki and Okiku have been the main vehicle for this topic for the most part. Not wanting to disappoint her parents or burden her sister, Satsuki reluctantly became an attendant at the hot springs inn, Konohanatei, despite wanting to become a shrine maiden. Thanks to encouraging words from Yuzu and others, however, Satsuki accepts her current role and resolves to try her best until she can try being a shrine maiden once again.

In a similar vein, Okiku merely wanted to be played with as a doll but was considered to be cursed as she is a sentient figurine. After being taken to Konohanatei to be cleansed, the girls opt to not exorcise her so she can continue living. Okiku, however, ends up having to serve guests at the inn to earn her stay and keep which is a better deal than simply not existing.

While Satsuki and Okiku have more or less come to terms with their situations by now and currently consider Konohanatei to be their home, the characters introduced in episode 8 of Konohana Kitan are lost in more ways than one. Despite belonging in a separate world, which is implied to very similar to our normal world, a highschool girl, an older gentleman, and a young boy (?) end up in the world filled with foxgirls and other youkai (in other words, they have somehow arrived where Konohanatei resides).

Being unsure of what to do in life, feeling ostracized due to being a chronic liar, and accepting that she isn’t too close with her parents (as in she frequently fights with her mother and her father is an absentee workaholic) the girl, Rei, feels alone and unwanted. Yuzu, however, manages to convince her that she does have someone who cares for her and who will appreciate her creativity (in regards to lying). Yuzu also helps the troubled youth realize that she could create kids’ books, which she loved as a kid, for a living. It certainly helps that Rei has such an active imagination. After leaving Konohanatei, Rei is found by her classmate, who was worried about her to the point of crying and who loves listening to Rei’s imaginative tall-tales. In other words, Rei found someone who likes Rei for who she is (and Yuzu is basically a prophet).

The older gentleman resides in Konohanatei for an extended period of time out of shame. It turns out he worked hard to provide for his family and was able to even send his step-daughter, who he loved as his own, to art school. But then he got into an accident and went blind, which meant he could no longer provide for his family like he used to. He considered himself a burden and wanted to go out peacefully and simply die, as he was convinced Konohanatei was the afterlife.

This sort of mindset is embraced throughout Japan, apparently. I heard that the esteemed Japanese society encourages women to find and marry financially stable partners who can provide. It’s not like in the Western world where the one she marries is her lover. Over here in America, (most) families will urge the woman to support her partner through tough times. But in Japan (apparently), families will urge the woman to leave her partner if said partner was laid off or is going through a rough patch. That may explain why there are so many broken families and single dads in anime, now that I think about it.

In any case, the older gentleman realized that his family missed him thanks to a pep-talk given by Kiri and the third visitor. As a result, he accepts that he’s ignoring his family’s feelings and that he should return to the real world where he belongs, but not before he shows some kindness to the third visitor. 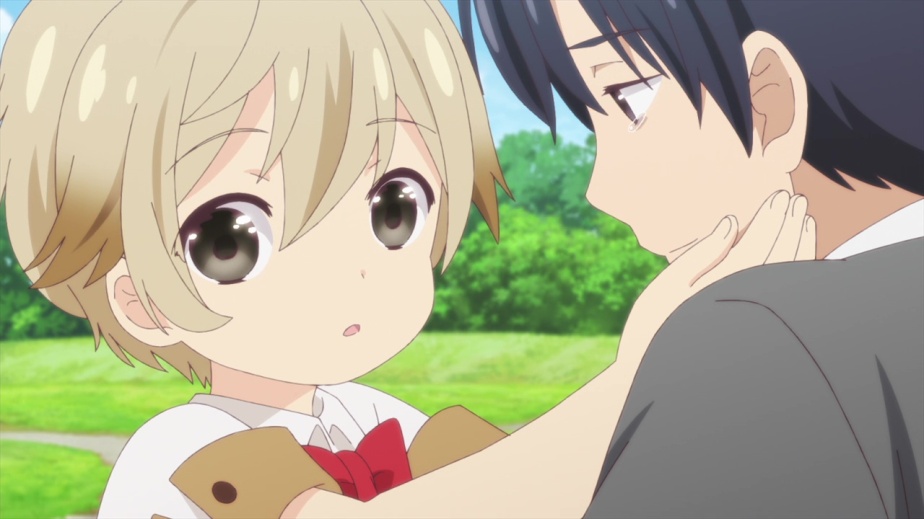 The third visitor, as I pointed out in earlier, initially seems to be a young boy (who is named Kaito) who is smug and confident that he will do great things in life since his parents make sure to tell him that repeatedly. And then Kaito is stripped away from his parents and forced to join a group of other children who tell him that they were all chosen to be special. As a result, he runs away to Konohanatei once again, wanting to go back home and feeling manipulated. Thanks to some encouragement from the older gentleman, however, Kaito agrees to return back to the real world and decides to study hard to help others.

And then it’s revealed that Kaito is actually a puppy who ended up being trained as a seeing-eye dog. It just so happens that he becomes the older gentleman’s helper dog and buddy. Furthermore, Rei turns out to be the older genteman’s step-daughter and she was able to become a successful author and artist of children’s books.

Look, something like this may be considered to be too perfect for some viewers. It’s overly convenient or too easy. And fine, they may have a point.

But it doesn’t change the fact that it’s a beautiful conclusion that resembles a dream. It’s no coincidence that Kiri told an older lady (who had lost her child) that Konohanatei is like a dream back in episode 4. Impossible things happen and sometimes humans (and dogs) wander into Konohanatei by dreaming as seen by how the three visitors in this episode enter the inn (well, Rei comes close to entering, but doesn’t quite make it). (EDIT: Rei might have actually tried to commit suicide, actually. After all, she lies constantly. If that’s the case, then maybe humans can only enter Konohanatei after they have a near-death experience)

These are the happy sort of dreams, however, and I continue to be emotionally moved by each and every episode of Konohana Kitan. In a world where we tear down shows for being cliche and for underperforming when it comes to execution just because it’s easy to do so and where we praise series that have “dark” underlying themes and grim turn-of-events, there’s definitely a place for a series that continuously tugs at your heartstrings week after week. No slow and clunky arcs here – just episodic masterpieces.