In some ways, Love Live! Sunshine!! 2nd Season episode 8 rectified some of the series’ looming characterization issues. However, the episode has also slanted more towards other characterization mishaps which serves to partially undermine the aforementioned progress.

As stated earlier, the issue Love Live! Sunshine!! 2nd Season episode 8 addresses (and fixes) a long-standing problem – the role of Kurosawa Ruby. Not too long ago, I published a post where I give my thoughts on the individual roles each member plays. It’s all personal opinion, of course. As a side note, I would like to add that Yoshiko has little social tact, as seen in how she drops honorifics for everyone which could be considered to be rude,  which means she can be overly blunt. The fact that she doesn’t sugarcoat statements, coupled with the additional fact that she’s prone to defaulting to her chuunibyou persona during inappropriate moments, means she frequently is on the receiving end of physical rebuttal. You can see I found the impact the first-years bring to the table to be rather lacking. Yoshiko, Ruby, and Hanamaru are just… basically there. It doesn’t really matter if published materials have them as sub-clothing-designers or sub-lyricists if we’re never shown them working.

In a similar vein, I wrote about a post about how unfortunate it is to be Kurosawa Ruby before season 2 started. Dia’s younger sister was essentially robbed of (individual traits (or overshadowed by others when it comes to said traits) and only exists to be a shy wallflower who loves her older sister, who helps convince her best friend to join Aqours, and who sheds some light on the drama between the third-years before everything is properly revealed.

In episode 8 of the second season, however, Ruby comes to the forefront as Aqours tries to comfort Saint Snow who was eliminated from the Love Live! competition. To be fair, Sarah had already came to terms with what happened, but Leah regretted that their final chance to compete in the Love Live! together (as Sarah is a third-year which means this is her last year as a school idol) was thwarted earlier than expected due to their mistakes. This in turn meant that her big chance to show Sarah that she can do well by herself went poorly.

Being in a similar situation as a younger sister who is close with her older sister, Ruby is the first to recognize and understand Leah’s feelings as she feels the same way regarding Dia’s impending graduation as a school idol. There are several instances throughout the episode in which Ruby is shown noticing Leah’s anxiety, in fact. But it doesn’t just stop there. Leah is a girl of few words. But when she does open her mouth, she tends to boast or look down on others. Meanwhile, Ruby is a timid girl who struggles to properly talk with even her friends, let alone strangers. In other words, both girls have problems when it comes to communicating with others. It’s definitely not a coincidence that Ruby sympathized with Leah since they’re so alike deep down. Their twin-tail hairstyles are also similar as if to emphasize their likeness.

After telling Dia that she wishes to be a school idol (back in episode 4 in the first season when Dia was still pretending to hate school idols), Ruby has willingly followed in Dia’s shadow and has never truly attempt to act autonomously ever since. But after this episode’s heart-to-heart with Dia where she reveals that she still wants to be right by her sister’s side even though that’ll soon become impossible, Ruby resolves to meet the brooding Leah all by herself in an attempt to cheer her up. Choosing to do so demonstrates that she’s either the kindest or nosiest member of Aqours (depending on how you interpret everyone else’s opinions in regards to interacting with a crestfallen Saint Snow) and that she does have a sense of initiative.

Furthermore, the episode ends with the younger Kurosawa sister coming up with the idea that she and Leah should dedicate a song to their older sisters so Saint Snow’s final performance isn’t a disaster (which would erase Leah’s regrets). What a considerate and innovate idea, Ruby! In short, Ruby’s progression as an independent younger sister was conveyed brilliantly and her portrayal in this episode makes up for her stagnant characterization thus far. GanbaRuby, Ruby!

While Ruby flourished in this episode, however, the same can’t be said for two particular characters who have remained relatively static since the first season. Just look at how many Aqours members have received a plethora of characterization in either season. The third-years, for instance, are now often key players in the second season. Chika and Riko dominated the first season in terms of screen time and Chika remains the character to watch whenever Aqours or Uranohoshi Girls’ High School experience a setback. Even Yoshiko experienced being in the spotlight in both episodes (admittedly the second time primarily happened in order to convey a budding closeness with Riko so Yoshiko has a reason to call Riko “Lily,” a nickname that has existed in published material but hadn’t manifested in the anime until episode 6 in season 2, perhaps. But more on that later).

Meanwhile, Hanamaru has mostly been shoehorned into this foodie comic relief role – in some people’s opinions. Said individuals might have forgotten that Hanamaru also serves as Yoshiko’s keeper (to be fair, Riko seems to have inherited the role after episode 5) and that Hanamaru remains a devout Buddhist as seen in episode 2 of season 2. Be that as it may, she does seem to be used primarily for gags (the gag in which she wears too many layers and ends up crushing You, Ruby, and Yoshiko appears twice in this particular episode) or to demonstrate that some school idols really like to eat (she’s shown eating a huge burger twice in this episode, too).

It’s not like being forced to be comic relief is a bad role for a character. Yoshiko and Riko were often the ones who have to endure being placed in such a trying position back in season 1, after all. But it’s particularly frustrating for some to see Hanamaru continuously do goofy stuff since she’s yet to receive any sort of actual characterization since episode 4 in season 1 where she was shown to believe that she was unfit to be an idol since she was initially a nonathletic bookworm. As John from A Thousand Word Equivalence puts it, Hanamaru is now comfortable with being an idol, which is great, but the series chooses to play up her adjusted mindset for comedic relief. It’s the simplest way to make her feel included, yes, but it comes across as being quite one-note. 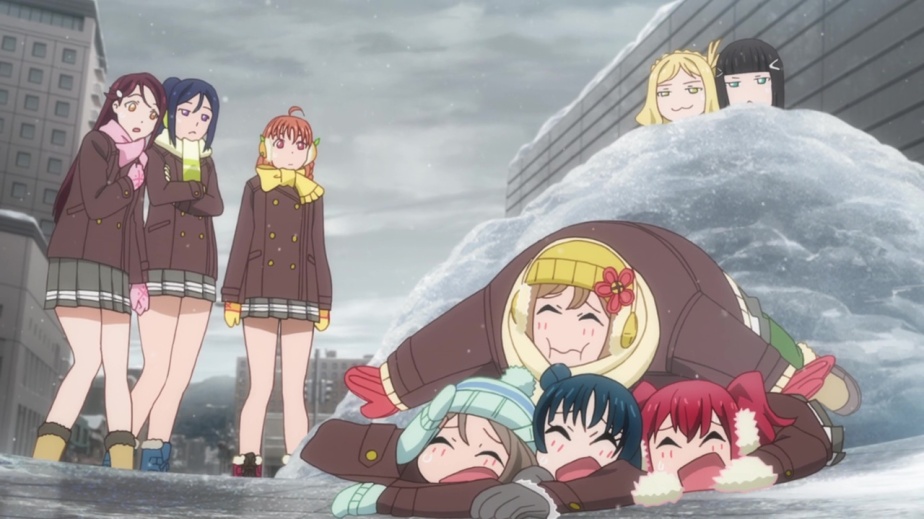 Meanwhile, Yoshiko (as stated earlier) was the focus in two episodes. The first Yoshiko-centric episode had everyone reassure her that she could be herself (aka she can act like a chuuni if she wants) without judgment and that she is able to become friends with the other members (she was sure no one would want to be her friend after her chuuni outburst during the first day of school). The second Yoshiko-centric episode had Riko reassuring Yoshiko that there is a thing such as fate and that theme may very well prove to extend to the second season as a whole. The girls had assembled together to form a group by fate and while setbacks have guaranteed that their school will be shut down no matter what, perhaps Aqours can perform a miracle, win the Love Live! and have the name of their school live on in the records through that means. That, too, may be destiny – whether or not the meaning and credibility of their victory is poignant and acceptable will largely depend on whether you think their victory is justified or mandated by plot.

As for Riko, her interaction with Chika in the first episode of season 2 reveals that her mindset has experienced a complete reversal compared to how she was in the first 2 episodes of the first season. Frustrated that Riko seems relatively complacent with the school merging, Chika claims she’ll never forgive Riko if that’s the case. Riko, however, reassures her that she now loves school idols and that of course she’s upset about how Uranohoshi Girls’ High School is shutting down, which is starkly different from how she was initially lukewarm towards school idols and how she was unsure if she could even be a school idol when she simultaneously cares about piano. Plus she now can pet dogs without getting scared. Wow!

If I had to complain about Love Live! Sunshine!! 2nd Season, however, the series puts too much emphasis on the girls’ quirky traits. But, as thoughtsinmotion aptly puts it, this is a common issue that plagues stories featuring a large amount of characters. A character will have a strong arc or episode where they’re fleshed out and then they’re pushed to the side where they only have their zany quirks to remain relevant and identifiable. Yoshiko will always act like a chuuni, Kanan has been shown to be very quick to hug others, and Dia has blurted out “Buu buu desu wa” very often in this cour, but Hanamaru seems to consist of nothing but quirks at this point. Even the fact that she now acts very differently compared to how she was in the first 4 episodes of Love Live! Sunshine!! doesn’t affect the aforementioned perception.

This is a broader storytelling problem where a character has a great arc and once their focus is past they go towards the outer edge of the character circle (where characters further from the core plot become more defined by their quirks). It’s tough to avoid with ensemble casts

However, I would like to assert that You, not Hanamaru, is the one who has suffered the most in terms of characterization. She doesn’t mentally progress at all after her focus episode (which was episode 11 back in season 1) and has remained in the background for the entirety of season 2 where she basically snarks at others while saluting. I just think the series might have missed a chance for Chika, who has always wanted to shine, to find her brilliance by paying more attention to You, who seems to a natural-born genius who is shown to be skilled in several fields.

Be that as it may, the series is having Chika find a way to be radiant via different means (namely the power of hard work and persistence in the face of defeat) which does clash with You’s inherent talent. As such, it makes sense that You is pushed towards the sidelines, but it’s still a sad sight to see for You fans. All she really got to do thus far is hug Chika to calm her down in episode 7. Other than that, she’s in dire straits and it seems unlikely she’ll receive additional development before the season ends. But I could be wrong, you know? We’ll have to see, yousoro.

2 thoughts on “Uneven Characterization, Quirks as the Only Means of Identification, and Aqours”