Summary: Based on COLOPL’s school action role-playing game. Set in the year 2045. The world has been contaminated by Irousu (mysterious invaders who suddenly appeared), and humans find themselves restricted and contained. Standing boldly against these invaders are ordinary girls everywhere, without a powerful army or even weapons.

The Shinjugamine Girls Academy is a school for these “Hoshimori” (Star Guardians) destined to fight the Irousu. The player is assigned to this academy to train the girls and take back the contaminated Earth. And so, once again, the chimes echo through the sun-strewn schoolyard to mark the beginning of classes today…

Review: Battle Girl High School doesn’t really do anything new and comes across as being generic. Just another series with a plethora of girls who fights enemies with yuri undertones, an excessive amount of characters that is mishandled, and a somewhat interesting twist that comes out towards the end of the series. The problem is whether or not the viewer can last that long.

There’s actually a male character (who is the girls’ teacher, no less) in BGHS unlike in SGS and apparently he is the character we play as in the video game. Fortunately (or unfortunately), he’s shoved to the side where he plays a supporting role and there’s no developing teacher x romance to be had.

Battle Girl High School is so generic that I really struggled to finish the series. I didn’t feel like watching more after episode one back when it was airing in Summer 2017. Towards the end of the season I attempted to pick it back up, but I only got to episode 3 before this overwhelming sense of opportunity cost kicked in (i.e. I thought to myself, “I have a lot of other, more important things to do”). But I finally finished the series when Fall 2017 is getting close to being finished, so there’s that. It only took me a few months! 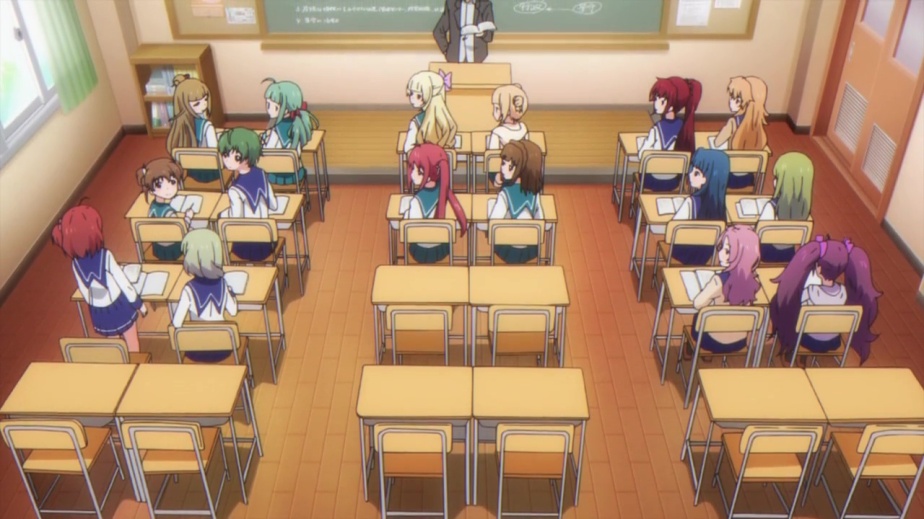 There are two things that make Battle Girl High School stand out. Firstly, the seiyuu pool is amazing. So many top-end, brand-name voices are a part of this project. Alas, this doesn’t exactly save the series from being mediocre, but the girls do sound very pleasant. The only problem is that there are simply too many girls in the series and they were poorly introduced in the first episode, which turned off a lot of people. I actually started remembering the girls as the series progressed, but I never had them all down pat.

Secondly, the OST is amazing. At least, the OP and ED are since both really get me pumped up. I really really like the sound of the songs the idol group, f*f, put out (which is an idol group within BGHS). Same goes for the insert songs. In regards to the instrumental OST, I remember a lot of emotional, sentimental piano music. Not bad, but a bit forgettable.

As for the yuri, the girls are really gay. Sorry, Sensei, but you won’t be developing a harem here. There’s plenty of ships for you to choose from, but one of them, uh, might be a little controversial due to the twist (which will not be elaborated on here so maybe one of you will become motivated to actually watch the series).

Boring, generic, and there are simply too many characters! But the girls are voiced by excellent seiyuu. The OP and ED are both wonderful, too, in my opinion. It’s not a terrible show, but it’s painfully average. I did enjoy it more than Schoolgirl Strikers, though (which you should watch if you want to watch similar shows).