Summary: Three high school girls are putting together a limited-time shop called “PARK” in Japan’s Harajuku. One day, aliens come to Earth with the intent to steal the famed district’s culture. At the same time, a mysterious girl appears. The three girls band together to defeat the alien threat and protect their beloved Harajuku.

Review: Look, many people were quick to dismiss URAHARA after episode 1 aired, myself included. The artstyle, which could be described as sloppy, amateurish, unrefined, and rough, was the chief complaint. The characters also initially seemed flat and uninteresting.

While the series had a slow start, URAHARA truly blossoms into a fantastic show around halfway into the season. Startling revelations come in week after week while the series bravely tackles topics that are so important yet are often ignored in daily waking life. Is the payoff – seeing an open dialogue on what it means to be creative and what it means to create – enough to make the show a good watch?

I’ve written about URAHARA on multiple occasions (three times total), but two of said editorials contain spoilers and revealing spoilers would really hurt the series as a whole. With that being said, I won’t really go into too much detail about the show in this review aside from briefly touching upon how its artstyle is reflective of Harajuku and how it should be considered both meta and introspective.

As I’ve said in this post, URAHARA is short for Ura-Harajuku. Harajuku, in case you weren’t aware, is the fashion-forward district in Japan where youths wear flashy and vibrant clothes. The term Ura-Harajuku (or Urahara), however, refers to the backstreets of Harajuku and is comparatively more retro as it focuses on “oversized streetwear, graphic t-shirts, and vintage items.” I won’t bore you by repeating myself, but that’s exactly the sort of clothes that Mari, Rito, and Kotoko rock in URAHARA. In that sense, the three girls represent Urahara through their fashion sense, which is just as well considering how said style isn’t as popular these days.

Be that as it may, Urahara is still a part of Harajuku, the place to go if you want to flaunt how daring, flamboyant, and fabulous you are with your clothes. And thus, URAHARA also captures the spirit of Harajuku through its backgrounds, which are both chaotic and colorful (for the most part).

Now, I’ve already mentioned that the artstyle is controversial. If you can’t used to it after a few episodes, then I understand if you feel like you have to drop URAHARA. But I do feel obligated to remind you that one of high school classmates dropped Madoka simply due to the artstyle and consequently missed out on a good series. Similarly, I think you’ll be missing out on a good series if you were to not give URAHARA a chance, but you gotta do you, right?

In regards to how URAHARA is meta, the series revolves around the very concept of creativity (as well as acceptance). After all, that’s why these aggressive aliens are stealing human culture in the first place since they believe themselves to be incapable of imagining and creating things. After the girls decide to protect Harajuku without thinking things through, they eventually end up wondering what it means to be creative (it’s no coincidence that this is around when I became invested in the story).

Should someone be allowed to borrow or imitate others while attempting to develop his or her own unique style? Must everything be original? Should art be judged on its popularity or is there merit in drawing what you like? These sort of questions and more are addressed and discussed throughout the series.

The exploration of such themes and concepts are important because we bring up such things in a daily basis as anime viewers. “Oh, this show doesn’t seem all the original.” “This series totally ripped off that series.” “This series didn’t really sell well so it’s never getting another season.” Like it or not, these sort of sentiments are everywhere and there’s no universal and unanimous opinion or agreement when it comes to these impressions or situations. So why not welcome discussion? Why not start conversation so we can at least try to come to terms with one another’s beliefs? Maybe it’s a bit ambitious to say that URAHARA achieves such a goal since it’s just another anime series among thousands, but it certainly doesn’t dissuade such a stance at the very least.

There’s really not much else I want to say. The characters seem boring and one-note at first, but we really get to see them change throughout the series (for better and for worse). The yuri shiptease is there but it’s faint, as usual. I love the OP, “Antithese Escape” by Uesaka Sumire, to pieces because it’s so upbeat and catchy.

Not for everyone considering how some people dislike magical girl series, dislike particular artstyles, and dislike shows that get philosophical (admittedly, I found the girls’ interactions to be earnest and insightful, and at times painful, but some people will surely think otherwise). Still, I’m glad I continued watching URAHARA. It really gets you thinking! I’ve said this before and I’ll say it again: URAHARA is the meta show that Re:Creators wished it could have been. 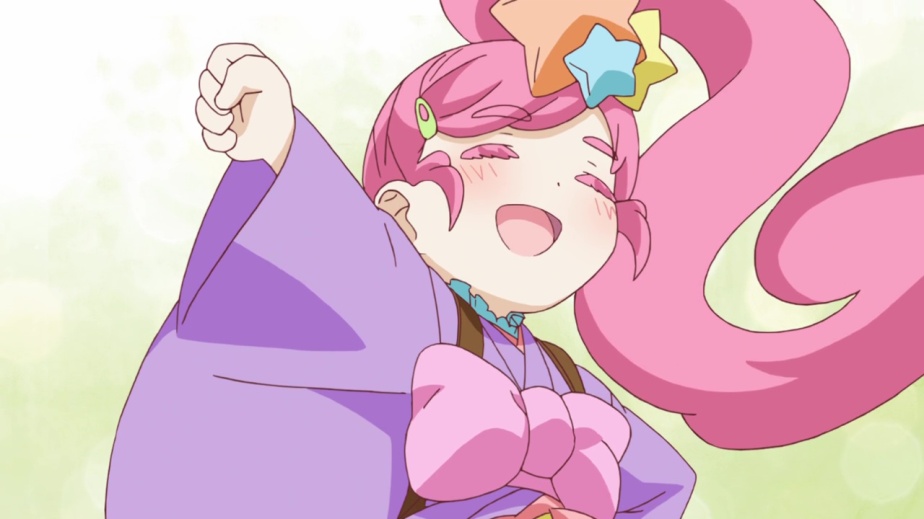