Originally released in August 2015 on Steam, Asphyxia is a visual novel where the main character, Samantha, has a single day to repair her relationship with her best friend, Lillian. But is it too late? And is this visual novel worth playing?

Summary: See opening paragraph. I do want to note, however, that the excerpt regarding how Samantha only has a day to patch things up with Lillian is referring to how the girls and the rest of their classmates are on a field trip. That doesn’t really mean all that much, but I just thought some context could be nice.

Review: For a visual novel that is intended to be (and succeeds at being) educational, Asphyxia hits hard emotionally and can resonate with players who are going through rough times. ebi-hime clearly shows that she has done her research and that she isn’t afraid to explore mature themes. 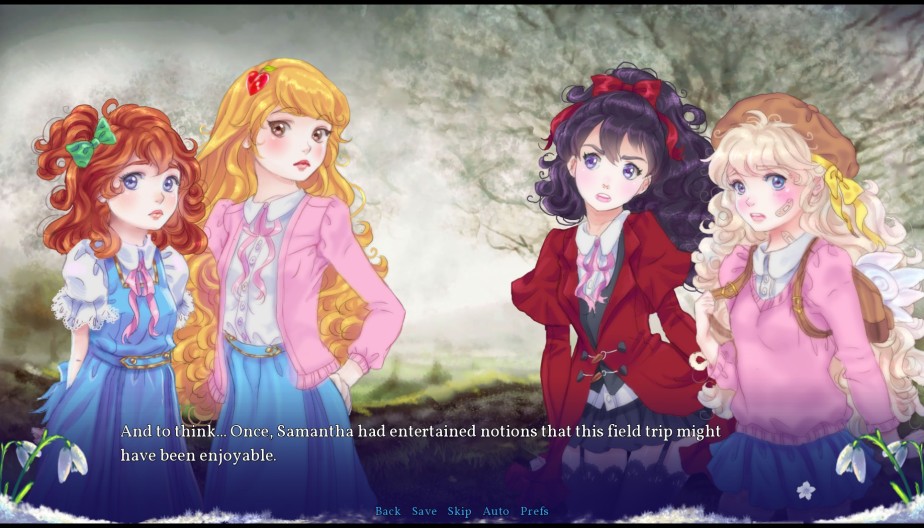 Now, when I mention that the visual novel is educational, I’m talking about how the characters in this game are fictionalized genderflipped versions of Romanticist poets. In short, these 18th/19th century writers challenged the emerging Industrial Revolution and tried to encourage and bring notice to the “simple beauties and awe-inspiring sublimity of the natural world.” And it just so happens that Samantha and Lillian are based on two of most famous English Romantic writers, Samuel Taylor Coleridge and William Wordsmith. Their relationship, as with the relationships between other characters in Asphyxia, is intended to echo the relationship they had in real life.

But it’s the relationship between Sam and Lilly that defines the game. Unfortunately, it’s a tragic bond and a result, the game is rather somber in tone. Sam in particular is depressed and the way she struggles to deal with this aspect in her life, as well as the way others for the most part fail to understand why she’s having difficulty, can hit home for players who are going through the same thing. Contemplating suicide, substance abuse (which is a vice that consumed many of these Romantic writers in real life), dependency, craving others’ acceptance and approval, self-harm, and more are all at least explored in this visual novel. The other girls attempt to give suggestions and ideas to Sam, but she essentially doesn’t get better in any route. 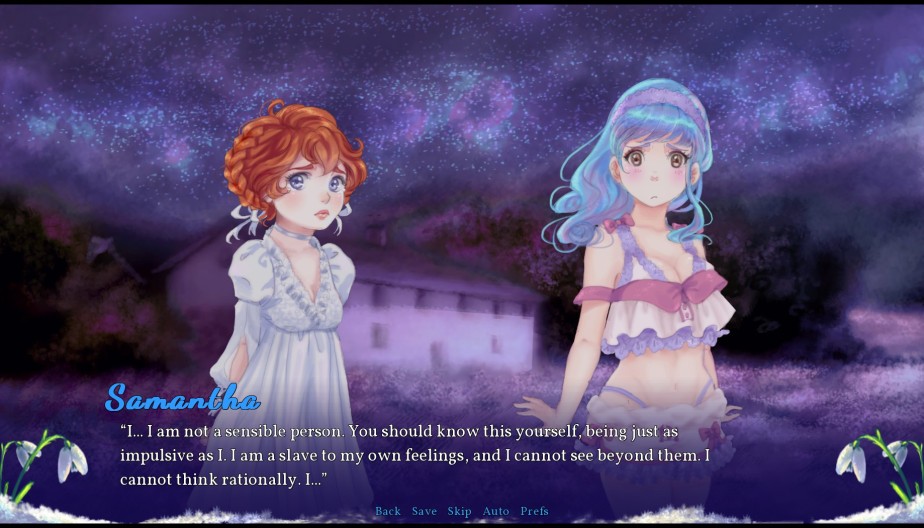 As a result, it could be said that this visual novel has no truly happy ending. Even in routes where Sam interacts with other girls, she never gets over Lillian. As this parallels the actual relationship between Coleridge and Wordsmith (to a degree), this cannot be considered overly surprising. Knowing how the real Coleridge and Wordsmith lived their lives even paints Lillian’s own route as bittersweet. That’s the game in a nutshell, too (by the way, the Extras menu features a lot of information on these Romantic writers and it’s definitely worth a read. As I said before, ebi-hime was very careful with her details and the little parallels that she has slipped into her story proved to be very fascinating and entertaining).

What I really appreciate is the way ebi-hime constructed her narrative. The finer details of Sam’s feelings towards Lillian, along with the events that transpired between the two and between Sam and Tabitha De Quincy (who was based on Thomas De Quincy) three months ago, are gradually revealed, leaving the reader to fill in the blanks and hang onto every small detail until the truth comes out. This is standard fare for visual novels, admittedly, but ebi-hime has really landed the execution and has consequently written a successful and engaging story with troubled characters who are still relatable. The pretty visuals and the haunting music helps establish the melancholic, pensive mood that defines this visual novel, as well. Be that as it may, ebi-hime manages to include little jokes that are genuinely hilarious and self-referential (aka meta).

While the yuri elements are relative mild (but still present), the thematics Asphyxia explore are not.

The visual novel features characters who have issues, evocative and stirring music, and beautiful graphics. The result is a concentrated dose of gloom that will leave the player feeling reflective and slightly perturbed for days or weeks to come. Personally speaking, that’s the kind of reaction I want from my visual novels. All the more impressive that the characters in question are based off real-life Romantic poets and writers from the 18th/19th centuries.

If you’re into depressing visual novels, give Asphyxia a shot.