Sora yori mo Tooi Basho is great for several reasons, What really stands out to me, however, is how well the series makes great use of space and imagery to hint at what characters are thinking or feeling.

In other words, yorimoi knows how to show instead of just telling. 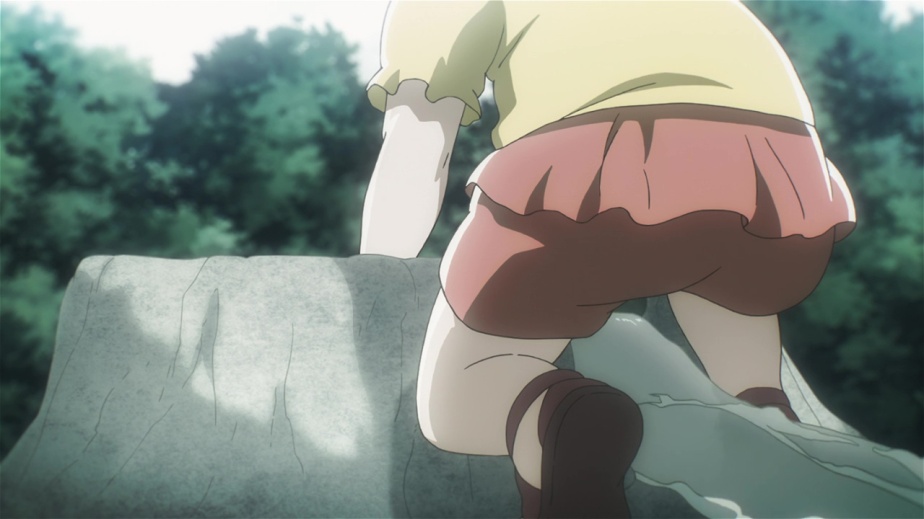 Early into the episode, the flashback scene in which a young Mari plays in the sandbox is revisited. This time, however, the aforementioned flashback is seen primarily from the perspective of Takashi Megumi, Mari’s childhood friend, who launches into a telling inner monologue.

It’s revealed that Mari is trying to make a leaf float in the sandbox’s artificial lake, which is really just a bunch of sand clumped together to form “walls” in order to house a (small) body of water. Inevitably, the sand absorbs the water, the walls crumble, and the stream spills out of the human-made “dams.”

Back in episode 1, this particular part of the flashback was accompanied by Mari’s own monologue in which she states, “The energy stored up during its stagnation bursts forth. Everything springs into action.” Essentially, the moment in which the “leaf-ship” is carried by the source of water represents Mari and her friends, who are choosing to go to somewhere special and unexpected and unfamiliar. But the viewer also learns that this visual imagery also applies to Megumi.

Observant viewers might have noticed this already, but Megumi is not content with Mari’s decision to go to Antarctica and has been displeased for a while by now. It’s this episode, however, in which her feelings are made blatant.

As the two girls meander in front of the temple the day before Mari and her new friends are to set off to Antarctica, Megumi mentions how there are nasty rumours (which involve Mari and the other girls) circulating throughout the school.

And as she tries to dampen Mari’s spirits, the viewer can see an obvious divide between the two girls as seen in this particular shot. The fence serves as a barrier, a line that visually separates Megumi from Mari. Megumi, who is feeling conflicted, also appears to be boxed in whereas Mari, who is now free to chase her middle school dreams by going to Antarctica, is standing in the open seemingly uninhibited.

Megumi looks different than usual as she confronts Mari right before she heads off to Antarctica. Her typical braids, which always made her appear as uptight, distant, disciplined, and calm, are nowhere to be seen. Instead, Megumi wears her hair down as she tells Mari exactly how she feels before proposing that they should break-up. As such, her appearance suggests that she’s going to be upfront and honest, which is supported by her frank conduct.

A more “logical” explanation, however, is that it’s really early in the morning, which means Megumi didn’t have time to braid her hair since she was desperate to catch up to Mari.

To end this post on a more humourous note, Mari blanches when Megumi reminds Mari that she had lost Megumi’s PlayStation. As Mari reacts in such a way, the game Mari is playing makes an ominous sound which coincidentally matches Mari’s expression (as well as the guilty feelings inside her heart, perhaps).

This post was inspired by AllHailHaruhi’s post on Visual Storytelling techniques in The Disappearance of Nagato Yuki-chan as well as Jenn’s posts on Sora yori mo Tooi Basho for episode 1, episode 2, and episode 3. Please check out their content, which was written with minds more deft than mine, as well.