On first glance, Ryuuou no Oshigoto! is a series that panders to anime viewers with a penchant for very young anime girls.

And that’s correct to a degree given how there are so many grade schoolers running around in the show. 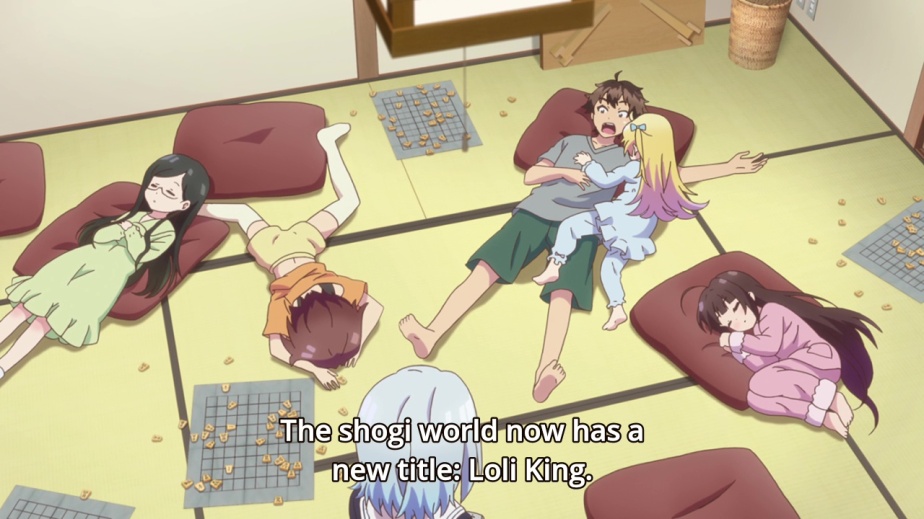 But these young girls also happen to enjoy shogi and Ryuuou no Oshigoto! does an excellent job conveying the inherent obstacles and frustrations associated with Japanese board games, competition in general, as well as real life.

The series starts off with Yaichi, the youngest person in history to hold the prestigious title, “Ryuo,” in a bit of a slump. Despite the fact that he’s now considered the best player on-paper, he has started losing constantly because he started trying to play while considering appearance. Yaichi mistakenly believes that he should always try to look and appear dignified, which meant he would give up gracefully whenever things started looking bad. In other words, he lost the will to win.

But desperately holding on while giving his best to reach for the top is what caused Hinatsuru Ai to start admiring him and wanting to play shogi. Similarly, that same drive in his master is what made Yaichi think his master was cool, too. That hot-headedness is very much a part of him, but it seems like becoming “Ryuo” made him prioritize people’s opinions and his own skewed perception of “proper conduct” over results. 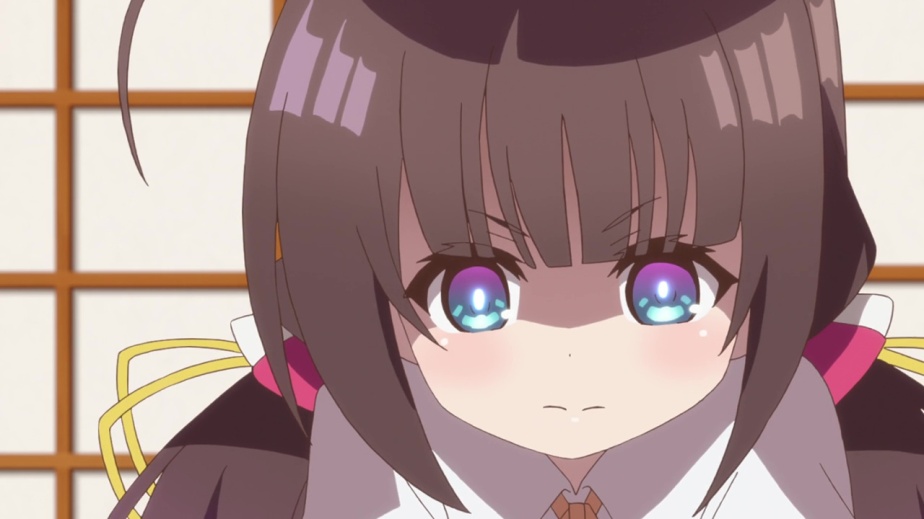 Although some may fail to understand his mindset, it was really about pride and about appealing to others. Yaichi had thought having a beautiful and clean match record would be ideal and optimal, but he had forgotten he wasn’t that sort of type of player to begin with. With Hinatsuru’s help, Yaichi realized that it’s okay to look unkempt as he tries to seize for victory. A messy match record is fine. Pursuing gracefulness at the cost of possible victories is not.

There’s still room for Yaichi to get even better despite being “Ryou” since he’s still young. But it’s easier for him to falter and lose his footing. He has to actively try to improve or else he’ll get swallowed up by everyone else. And so, in order to defeat Natagiri Jin, a consistent player he’s yet to overcome, Yaichi opts to evolve and adapt a difficult and different playstyle, which is yet another instance of him abandoning his sense of self again. But perhaps the results will be different this time.

Meanwhile, Hinatsuru is so inherently talented that she crushes most peers around her age to the point that she gets comfortable, stops improving, and actually starts playing worse. Without the threat of a strong opponent, there is a weaker incentive to strive to progress. Sure, she regularly loses to Yaichi, but in her mind she makes excuses that he’s more experienced and simply better, which means she simply accepts her losses against Yaichi more or less. 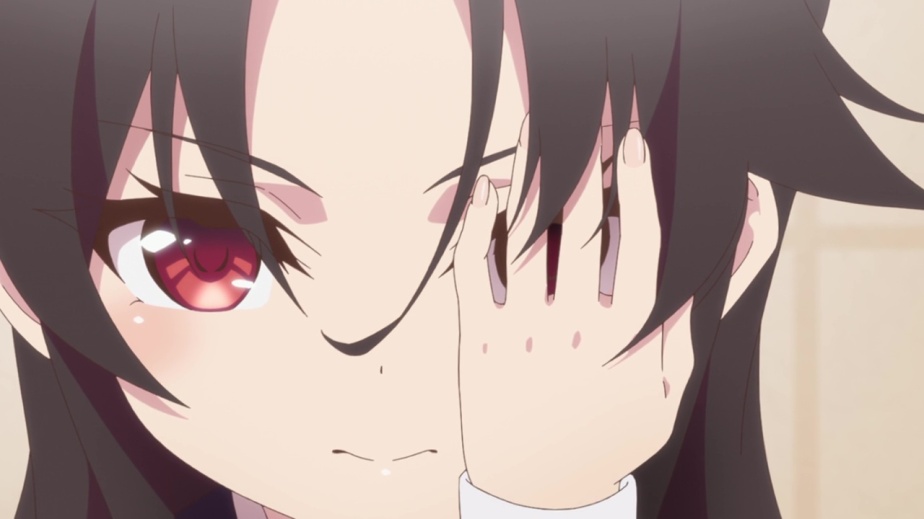 Thus it takes the advent of a rival, Yashajin Ai, to really reignite Hinatsuru’s passion to improve. A rival is someone you desperately don’t want to lose to and provides a sense of motivation that can’t be found in a mentor figure. Theatrics and dramatic elements in said arc put aside, this was something that had to be done and it was excellent on Yaichi’s part to realize that.

Unfortunately, Keika, Yaichi’s master’s granddaughter, is in dire straits since she is running out of time to become a female professional. Many around her says she has the aptitude for shogi, but she hasn’t been able to secure the necessary results that would allow her to promote. To athletes and enthusiasts who pursue a sport or passion despite not being quite good enough, seeing Keika’s struggles brings a familiar pain to their chest as they witness a kindred spirit flail around in despair. Yet that’s the essence of competition where you have to be good enough or else anyone could become a pro which would render the divide between amateur and pro meaningless. Be that as it may, it hurts to watch someone drown without being allowed to breath in the first place.

Talent is NOT Everything

It’s so easy for a narrative to shoehorn characters who overwhelm others with innate talent. And to be fair, Yaichi, Hinatsuru, and Yashajin are individuals who have been blessed and could be considered geniuses. Yet they are not unbeatable.

Furthermore, Yaichi’s master is said to be less talented than Yaichi yet he’s reached 9-dan, a full rank higher than Yaichi. Similarly, Jin is noted to be less talented than Yaichi but he’s made up for it through extensive and meticulous research and continuously defeats Yaichi. Additionally, he studies shogi alongside Meijin, the true strongest shogi player in current times. With that in mind, it’s hard to say who’s the true underdog when it comes to Yaichi and Jin. 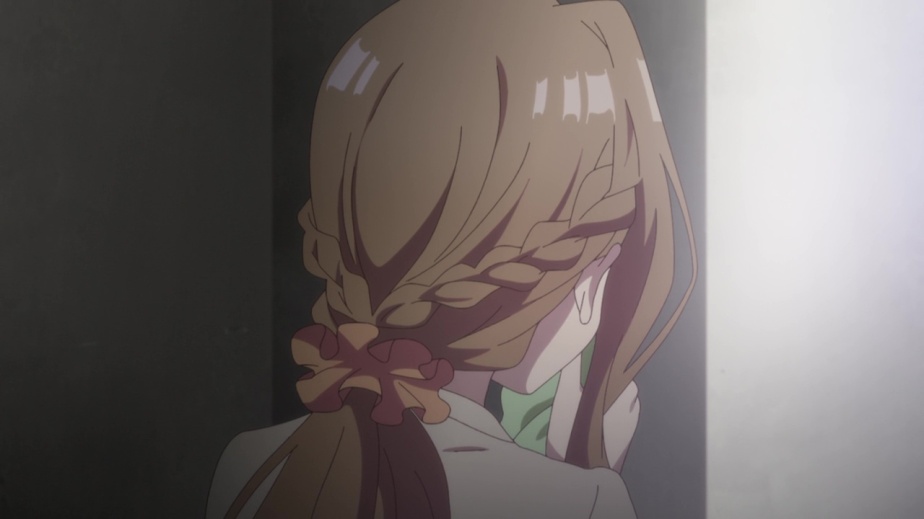 Painful as it may be, Keika (reluctantly) demonstrates that talent does not solve everything as she is gifted but she still ends up falling short.

It’s something so obvious that I feel silly bringing this up, but there’s always a winner and a loser whenever competition is involved.

I became conscious of this inevitable outcome when I watched Saki as a sophomore in high school. Despite the fact the members of all four teams who were finalists in the Nagano regional high school girl mahjong qualifiers received some backstory (which may or may not have caused viewers to root for girls who were not attending Kiyosumi), everyone knew that only 1 team could win. Only 5 girls could progress to the nationals whereas the other fifteen girls were to experience disappointment as their dreams come to an abrupt end for the year.

Even the nicest characters realize that in order to win, they have to crush the aspiration of others to advance. It’s the way competitions go. 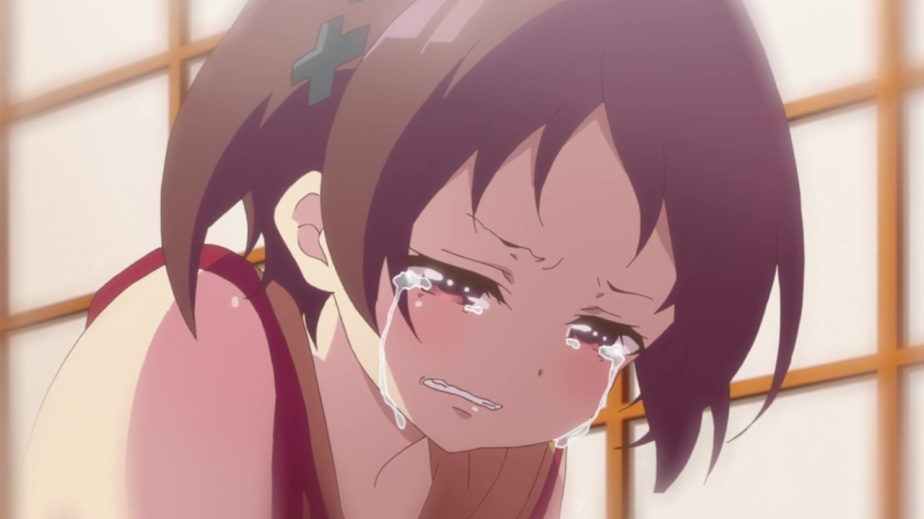 This was put on full display in the most recent episode (episode 6) when Hinatsuru realizes that she is now much better than most of her friends when it comes to shogi, which causes her friend to break down in tears out of frustration and despair. But instead of comforting her, Yaichi does the right thing and reminds her that while caring for others is very admirable, shogi players ultimately play for themselves.

If she wants to help her friend get better, then she has to play with her without holding back, which will force her friend to get better in order to cope or to give up altogether. The world of shogi is a harsh one and Hinatsuru has no room to be easygoing when she’s facing her own difficult constraints and limitations imposed on her by her overbearing mother.

In short, the world of Ryuuou no Oshigoto! may play up the cuteness of these young girls to an uncomfortable degree, but it’s also a setting that earnestly explores what it means to try your best in your beloved, competitive field. Said themes could definitely be applied to real life, too, given some thought. If you look past the Loli King and his questionable exploits, you’ll surely find a good show.

12 thoughts on “The Themes of Competition (and Life) in Ryuuou no Oshigoto!”