Summary: As a lone human living alone in the wild, you end up taking care of two wolf-girls: Mirari, a gentle and kind girl who is hesitant to succeed her parents in becoming the new leader of the pack, and Fuyu, an outspoken and dutiful girl who has several misgivings against humans. But for how long can this convenient situation last?

Review: Razzart Visual is at it again with another yuri visual novel that showcases relationships in which additional boundaries have to be overcome for the sake of love. Said theme consistently appears in Razz’s works and leaves players pensive regarding what it means to want to be with someone you truly. Wolf Tails is no exception with cute, fluffy visuals, atmospheric soundtrack, and well-trod but well-executed storyline.

The visual novels takes an interesting approach in regards to allowing the player to choose whether to play as a male or female character (I only played as the latter). The player can also choose a name for their character, which adds a personal spin to a things since the two wolf-girls will call you by your selected name. It’s a throwback to older visual novels in which the player is heavily encouraged to project onto the protagonist and is a rather unique feature not commonly seen in other yuri visual novels.

Wolf Tails also features branching narratives, two separate routes (one for Mirari and another for Fuyu), and multiple endings. However, two out of four of the endings are bad endings and each of the wolf-girls get a single ending, which makes for a streamlined experience since the player doesn’t have to bother with canon endings, good endings, or best endings. Just play the game, express interest in one particular wolf-girl, avoid making the two cold-hearted choices which can and will end the game prematurely, and you’re set.

Both Mirari and Fuyu are charming girls who have their own personal demons to deal with. Something I appreciate seeing is the protagonist (aka us) helping the girls come to terms with their own shortcomings and duties without being overly intrusive and preachy (well, for the most part; life-and-death situations are the exceptions). It’s a healthy environment which gets compared to the harsh meritocracy that is the wolf girls’ pack. After all, both of these cuties really do deserve a little kindness due to their troubled upbringings, even if it’s coming from one of those sneaky humans.

For the record, I’m a big fan of  haughty Fuyu who is dishonest and flustered regarding her personal feelings towards the protagonist, but nice girl Mirari is perfectly fine, too. They’re both really good girls and characters which is rather important when it comes to games with only two love interests.

As for the visuals, both Fuyu and Mirari look pretty, and, as mentioned earlier, fluffy. The talented Naso4 has succeeded in making the girls look huggable and adorable which helps in grabbing players’ attention since two wolf-girl babes are a potent force to be reckoned with. Mirari’s thick eyebrows! Fuyu’s punk-rock girl look! Wow! As an aside, the camera effects which were present in Love Ribbon are also present in Wolf Tails and add an cinematic feel in a few select scenes, which I found to be nice.

In regards to the music. I found myself enamored with the soundtrack and left the game playing for many hours just to listen to calming notes. One of the advantages a visual novel holds over traditional novels is the inclusion of music and Wolf Tails did a stand-up job in this regard.

If I had to bring up a minor complaint, I guess I would have to say I wish we got to see the protagonist explain his or her backstory to Fuyu on-screen during her route like what happens in Mirari’s route. I get that the routes are supposed to be unique and that different things happen in either routes, but this sort of makes Fuyu’s route seem supplementary in comparison. By that, I mean the player has to be play through Mirari’s route in order to understand what the protagonist is talking about which sort of implies that Fuyu’s route can’t stand alone. With that being said, it’s not like a player is going to just play one route and call it quits, so this is all just a moot point in the end.

All in all, I would say that Wolf Tails is a short visual novel with beautiful characters, wonderful music, and solid story. That’s a great deal for $9.99 USD. Go give it a shot! 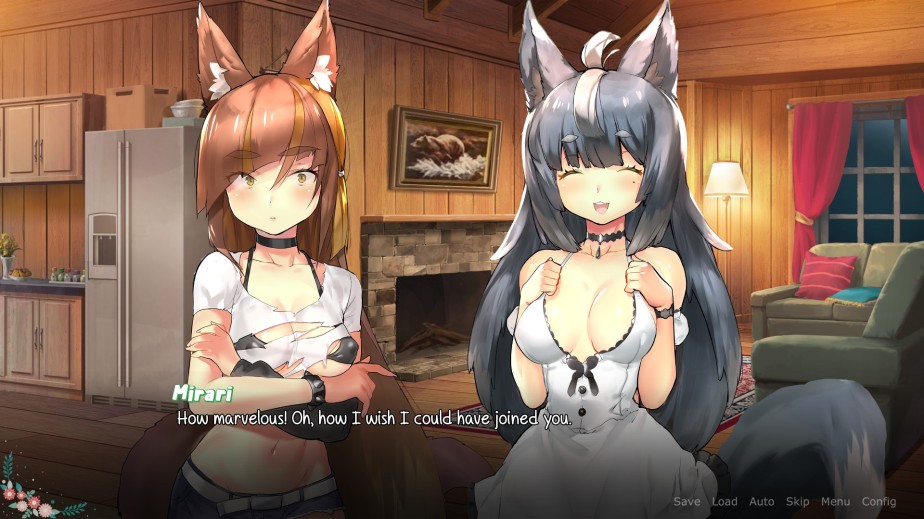