What do you all think about animal motifs?

Such comparisons could be considered to be lazy characterization by some, but I find them to be an apt way to cut right to the chase. After all, these parallels between human and non-human usually serve to accentuate and emphasize aspects of a character’s personality.

So to me, it’s like a little cheat sheet when you’re trying to get a bead on a character’s psyche and nature. Furthermore, such interesting similarities also help retain viewership interest. Or at least I laugh when a character is described as a stray cat before aforementioned feline-like person proceeds to confirm such a comparison. Is that engaging? Is that funny? Only you can answer those questions.

But that’s enough about that. I wanted to talk about monkey-like and gorilla-like anime girls. Why? Because it’s 11 pm on Sunday and I want a banana but there’s none in the house. That’s why.

To be honest, Chitoge is only on the list to pad the numbers. The other girls are likened to monkeys. Chitoge, however, is considered to be like a gorilla by Raku since she tends to hit him whenever she’s upset or overly flustered. In other words, Chitoge single-handedly changed the title of this post! She’s so powerful!

I wasn’t aware that gorilla were known to be violent towards wishy-washy harem protagonists, but now I do!

Still, I liked her more than that wallflower Onodera. But in my book, Chitoge, as well as all of the other potential love interests, doesn’t even come close to the wallflower’s younger sister, Haru. Fight me. 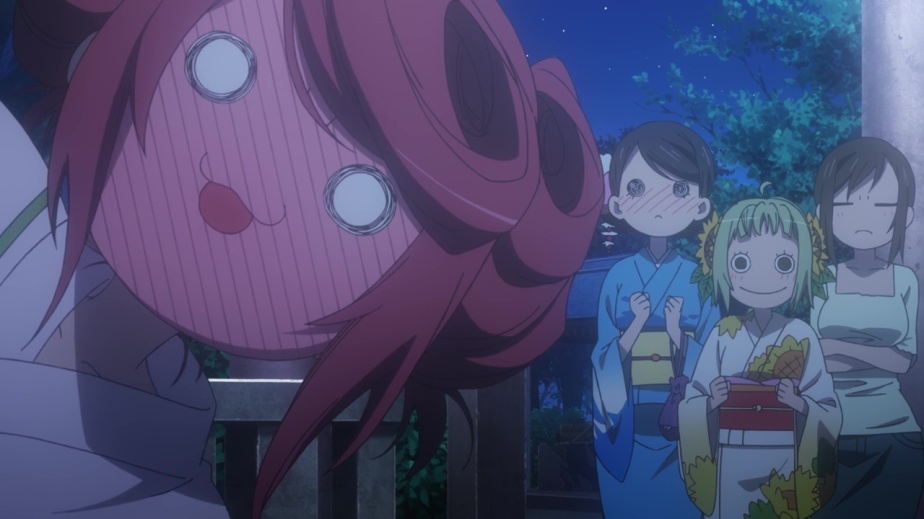 Ai, too, is quite violent and very prone to dishing out flying kicks to (deserving?) males. I’m starting to think that both monkeys and gorillas are not to be underestimated! Ah, but the way her face is usually depicted reminds me of monkeys somehow.

She even has a monkey-themed yukata lying around at home, which her younger brother purposefully brought up while they were in front of everyone else.

I think Ai is really pretty, but I guess I sort of relate to her because I’m also a twin (except we happen to be identical). I’m the older brother, by the way, even though a certain someone likes to claim I’m the younger brother since I’m too willing to spoil my clone.

Look, Aoba definitely doesn’t start off as the sharpest knife embodied in an animal carca– say what?

Be that as it may, Umiko is right. Aoba really does look like a monkey when she’s feeling sad.

With that being said, I do have a bit of a soft spot for Aoba because New Game! was one of the first anime series I did episode reviews on. Plus, I started working at my first job shortly after New Game! started broadcasting, which led to me sort of relating to her constant plights as a new hire.

…but at least I know what a NPC is…

Look, Shizuno turned from being just an average player to becoming a supernatural menace who can nullify the nonsensical and unlikely plays the other players rely on. And how did she do that? She constantly ran around in the mountains like a monkey for over a year. Shizuno is the most monkey-like anime girl of all.

Up against an energetic girl who has a poor attenton span, sports a poor memory, and usually acts before thinking things through, can the other contenders even stand a chance? Will my biasness never stop showing? I think we all know the answers to both of these questions.

…It must be the exposed, round ears that makes Shizuno such a monkey girl. Aoba has them, too.

Do you have any favourite animal motifs? Any other monkey-like girls in mind? Let me know!