Released towards the end of July 2018, Heaven Will Be Mine is a queer visual novel focused on three complicated and confused women who pilot giant mechas.

First of all, I promise I’m not using the term, queer, as a homophobic slur. After all, not only does Heaven Will Be Mine heavily revolve around not only lesbians (which can clearly be seen in how the visual novel is marketed), but it also explores sexual identity, marginalization, transgression against popular opinion(s), and much more.

As such, the mecha elements of the narrative seemingly only serve to establish the setting and flesh out the characters. The true heart of the visual novel lies in seeing how the three protagonists resolve personal issues, come to terms with their feelings towards others, grapple with their shortcomings when it comes to communication, and so on.

The visual novel could be described as a messy drama, in short, and the writing manages to be skilled and detailed enough to fill players in while also being vague enough so players can insert themselves into the characters and/or potentially miss some subtle yet important details.

For instance, at least three of the characters are implied to be trans (there are instances where characters bring up “old bodies;” dead names,” which is a common term for the names trans people held before they began transition; and so on). As someone who has been with transgirls in the past, such representation feels so important that I can’t help but want to spread this aspect around for all to know even though some may decry it as being minor spoilers.

Be that as it may, the mecha aspects still remain important to the visual novel, which is really nothing new for mecha fiction in general. For example, Gundam can be roughly summarized as a long-running message against war and its devastating consequences which is expressed through the mecha battles. Similarly, the giant ships the protagonists pilot and science-fiction world-building – which often play second fiddle to the aforementioned wild girls who are moved into action by burning feelings, angst, and sudden urges – nevertheless are crucial to the plot as the endings do heavily rely on the player understanding at least most of the dense technobabble that pops out throughout the game.

And yet these endings can be interpreted as being more much than just the conclusion of player-chosen routes and mecha events. Like the rest of the visual novel, heavy topics such as the human condition, queer struggles, etc, are examined. The players obviously have to meet the game halfway in order to see what the studio had in mind with these endings, of course. And frankly, players also have to work to get the most out of this particular visual novel in general since so much of the game is purposefully ambiguous.

With that being said, this ambiguity is what makes Heaven Will Be Mine a queer story in the first place. Labels and categories inherently tie us down and exclude us whereas ambiguity is a sort of freedom against all of that. Therefore, the vagueness that Heaven Will Be Mine embraces similarly gives the visual novel more flexibility to explore difficult themes, be them conceptual or not (Forgive me if I’m wrong about any of this, by the way – I’m just a cissexual man who likes yuri and only attended a single university course on gender studies. TELL ME if I’m incorrect so I can learn, please).

I considered the UI of the game to be immersive yet frustrating. I really felt like I was operating a mecha (or that I was looking over the shoulder of the three ladies who were piloting these mechas) since the UI was sleek and futuristic. I also liked how the protagonists had different UI with different colour scheme and sound effects.

Be that as it may, the fact that the Data Log could not be immediately accessed via just scrolling up was inconvenient. Same with how the Save Data option automatically jumped to the first save file so players were forced to scroll down the list of save files, one by one, in case they wanted to save their progress in save file #8 or something.

However, I will admit that these design choices essentially force the player to slow down and not rush through character lines and exposition. Taking your time to read what happens is actually rather important in this visual novel considering the aforementioned ambiguity.

I personally love the artstyle and can’t get enough of it, but art is so subjective when you get down to it. Mia Schwartz’s style could be considered hit-or-miss, I think.

I highly recommend browsing the Steam forums to get some more insight into characters and the endings. Since I’m trying to provide a relatively spoiler-free review, I can’t go into as much detail as I’d like. Not that I’m all too confident in my interpretation, anyways. Talk about a visual novel that’s quite skilled at making you ponder.

Time for a pros-vs-cons list to wrap things up! 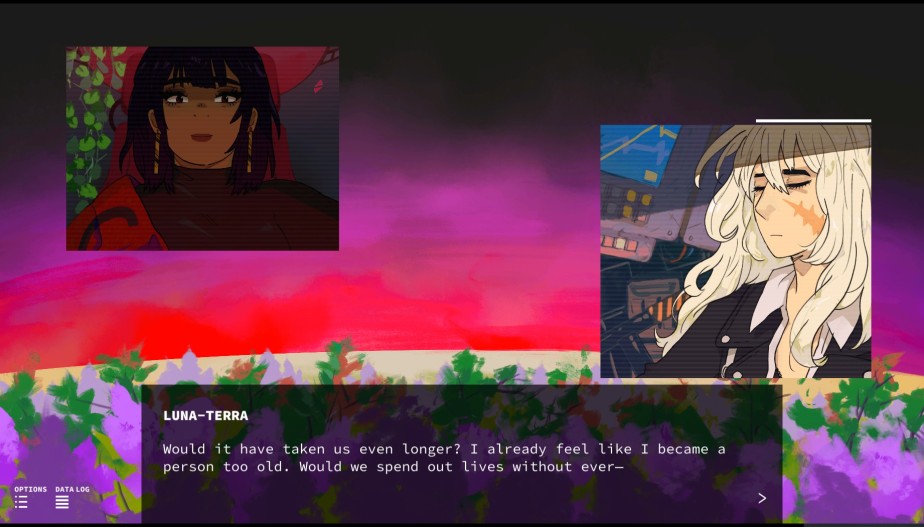 4 thoughts on “Heaven Will Be Mine – Visual Novel Review”