It’s been two years since I’ve started this monthly update thing, wow. And we only have 3 months until it’s the end of 2018!!!

Sorry about publishing this so late, by the way. The month is nearly halfway done!

Here are the most popular posts from September 2018. 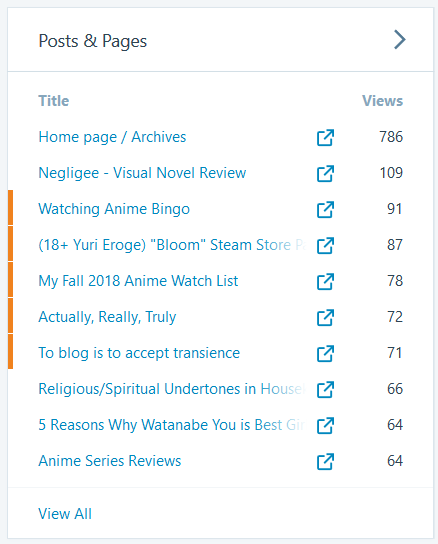 Seems like an older visual novel review is now making a resurgence! It’s probably due to my relative inactivity, but it’s still a bit of a surprise for me.

The next five popular posts are the ones I published in September, so that’s not really surprising at all. The laziest Houseki no Kuni post ever is still bringing in views along with the post on the most popular girl in Aqours! Yoshiko stans, we can go meet somewhere and cry together. I’ll bring the hard liquor.

I feel very conflicted about my anime series reviews being somewhat popular (in comparison to the other posts on The Lily Garden). Maybe I’ll write about why some other time.

Honestly, one of the reasons why I haven’t been posting is that I’m just so behind on reading other people’s content. I don’t feel worthy of posting my own when I haven’t been giving back.

Maybe it’s silly of me to be like this since there are plenty of “Big Names” who only focus on themselves, but that’s how I feel. Even though I think the kindness of the aniblogging community is over-exaggerated and not really factual, we’re still a community in the end. It’s not fair for me to just take and not return the favour.

I’m aiming to get back at tags, read other people’s contents, checking people’s Twitters, etc during the rest of this month. But don’t hold your breath for such a failure who keeps breaking his promises. I’m a creature of habit and my habit is disappointing others.

I’ve been getting swept into other video games, but I really do plan on catching up on lots of yuri visual novels. But I also need to finish the Spring 2018 series I slacked on before tackling the Fall 2018 series and so on… Is this how the saying goes? “The heart is willing but the flesh is weak?”

Ughhhhh five is too small of a number to make an objective list but such content is subjective to begin with. I don’t know, I’m mainly struggling with the scheduling (I feel like Karandi has Tuesday claimed and Irina has Friday. Maybe I’ll take Wednesday) since I’m stupid enough to not want to have overlap. These are the sort of useless things I take into consideration when it’s probably not important at all.

I’ve sort of hinted at what I had in mind on Twitter but I don’t know if I’m talented enough to pull this off. I guess I had better start trying instead of talking…

To be super honest, I’m worried I’ll fall short again since I need to start showing a new temp the ropes at work starting from this upcoming Tuesday. I’m still a rookie, too, but there’s no one else to teach the incoming employee. Hopefully I do not let that hold me back…