I wanted to talk about the tsukkomi role pertaining to the type of shows I watch and review.

A disclaimer, though: you probably won’t learn anything from this post. A lot of it is just my opinion.

In case you were unaware, the tsukkomi role is only half of an iconic duo that is commonly found in Japanese culture and media. The pairing in question consists of the boke and the tsukkomi.

While the boke sets up the gags by getting things wrong, the tsukkomi attempts to correct the boke’s misconceptions and errors. The boke continues to say and do ridiculous things until the tsukkomi inevitably snaps and gives the boke a light tap / slap on the head. Although the tsukkomi’s short temper and physical outburst is traditionally part of the comedy routine, the “corrective” action can also be omitted which means the tsukkomi continues to retort until the situation changes (via a scene transition, the interjection of a new conversational topic, etc).

As (briefly) stated above, this sort of interaction can be found in tons of Japanese anime. And after a while, I came to formulate a rough theory regarding the type of characters who usually assume the tsukkomi role.

The Girl with Long and Dark Hair is the Tsukkomi?!

More often than not, a girl with lengthy and black (or blue or purple) hair will be the one commenting on her fellow characters’ antics. I believe this happens due to their appearance. While this train of thought approaches superficiality and results obviously vary between individuals, a person with dark and long locks are typically portrayed as feminine, graceful, mature and so on.

As such, these “proper” ladies are well-suited to this “straight-man” role, delivering retorts and rebuttals to their zany family members, friends, and acquaintances. Because, like it or not, appearances do play a large role in giving an audiences a certain baseline expectation. Look at tropes, for example.

The tsukkomi in anime also tend to serve as a means for the viewer to self-insert, in my opinon. Upon seeing how the characters are being goofy, the viewer is prone to laugh and marvel at how they’re being silly (if the gags are properly executed). And the tsukkomi mirrors such a sentiment, which makes for an easy way for the viewer to potentially become invested.

When I first wrote about putting this post together in the Monthly Update for May, I gave it the placeholder title, “Two-faced Tsukkomi” for two reasons. The first one was because “two” and “tsu” (from tsukkomi) kind of share a similar pronunciation. Makes for a catchy title. That’s important to me. The other, more objective reason is due to how sort of characters tend to behave.

To put it bluntly, they seem to act hysterical. In the pursuit of correcting people’s misconceptions and mistakes, the tsukkomi can easily end up overreacting and being just as over-the-top as the boke.

The first time I noticed this type of behavior was when I watched K-ON! Akiyama Mio was the serious, “no-nonsense” girl of the band. As such, she was often reacting to her fellow members’ absurd antics. However, at times she also seemed overly emotional in her role to set her friends straight and came across as perpetually distraught or high-strung.

Tatsumi Kon from Urara Meirochou is very similar in this regard due to being a diligent and studious girl who easily gets flustered. However, she also ended up sharing the tsukkomi role with the decidely less “proper” Yukimi Koume. Nishi Yuuko from A-Channel has a similar temperament and assumes the tsukkomi role, as well, but she also shares it with Tennōji Nagisa.

Finally, Sonoda Umi from Love Live! and Kurosawa Dia from Love Live! Sunshine!! are also strait-laced and prone to reacting to silly statements made by their friends. Their notoriously short tempers serve as a callback to the traditional tsukkomi, too! 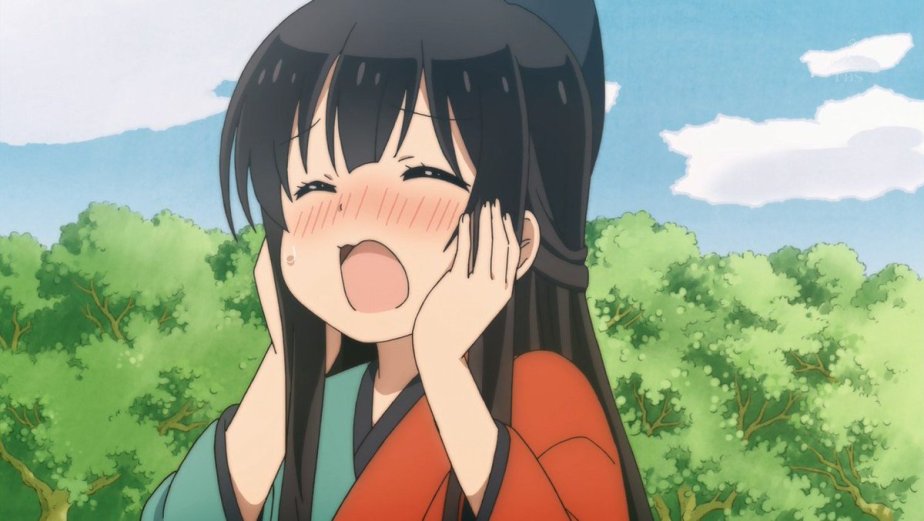 Of course, all of this is just a trend that I’ve observed. It doesn’t apply to every show. I primarily review all-girls-characters-shows, but I do also watch other shows. And the male protagonist in, say, a rom-com slice-of-life show is often forced into the tsukkomi role. Some examples would be Kazama Kenji from D-Frag!, Okazaki Tomoya from Clannad, and Kanda Sorata from Sakura-sou no Pet na Kanojo.

Anyways, that’s all from me. Hopefully it made some sort of sense.

10 thoughts on “An Analysis (?) of the Tsukkomi in Anime”