I’m sure most yuri fans have heard of Yuru Yuri, an easygoing yuri manga that received several anime adaptions. However, did you know that Yuru Yuri has a spin-off called Oomuroke which features Oomuro Sakurako and her two sisters?

In case you needed a reminder, middle schooler Oomuro Sakurako has a younger sister called Hanako and an older sister named Nadeshiko. Since the spin-off focuses on the Oomuroke family, the manga is essentially split into and alternates between three types of subplots.

Some stories focus on Sakurako being Sakurako (childish, moronic, yet endearing) and other chapters feature Hanako and her interactions with her elementary school classmates, who either admire her or deem her as a worthy rival to overtake (good luck with that, Misaki). These parts are amusing in their own right.

But this post is actually about their older sister. In addition to the previously mentioned threads, the third subplot involves Nadeshiko interacting with her three friends. The thing is, Nadeshiko is going out with one of the girls and the author has purposefully kept the readers guessing as to which one is her college sweetheart!

To further complicate matters, Nadeshiko and her girlfriend are also keeping their relationship a secret from their two friends. At any rate, we’re introduced to the candidates in chapter 3.

Nadeshiko seems to like teasing Megumi in order to see her reactions. There is also the fact that Nadeshiko somehow knew where Megumi works while the other two were clueless. Apparently Nadeshiko overheard it from a phone call, but that could be a cover-up.

As for Miho, she’s aggressively flirty towards Nadeshiko, but Nadeshiko seems to be unreceptive towards her behavior more often than not. However, perhaps Nadeshiko is putting on an act?

The last suspect is Ai. Unlike Megumi, who Nadeshike mercilessly teases, and Miho, who makes overt advances on Nadeshiko, Ai seems to maintain a polite and affable distance with Nadeshiko. However, Nadeshiko seems to be very interested in Ai’s tastes.

Chapter 19 has all three candidates imagining Nadeshiko joining them in a cosplay photo booth. This doesn’t really tell us much, however.

In chapter 27, we get to see the cosplay photos. Not only did the girls take group photos, but they also took pics with Nadeshiko as pairs. I found it hard to gauge anything from these pics, but they’re cute.

What makes the chapter interesting, however, is the way Nadeshiko reacts to their individual requests to revisit the cosplay photo booth.

Now for the phone conversations. In chapter 3, Nadeshiko says that the others will not notice their relationship if they only talk about a particular topic every once in a while. To me, this means Megumi is rather unlikely to be Nadeshiko’s girlfriend since Nadeshiko continues to give Megumi a hard time whenever possible.

She also acts like a bit of a tsundere, making Miho’s words about Nadeshiko being a tsundere seem rather suspect.

In chapter 26, Nadeshiko continues acting like a tsundere, denying that she’s celebrating over the fact that the two of them bought what seems to be matching necklaces.

The way Nadeshiko gets flustered seems to point to her girlfriend being the teasing type, which means Miho is a prime suspect once again. However, Nadeshiko notes that her girlfriend really likes movies. This points towards Ai, since Nadeshiko seems to keep track of Ai’s tastes as stated above. 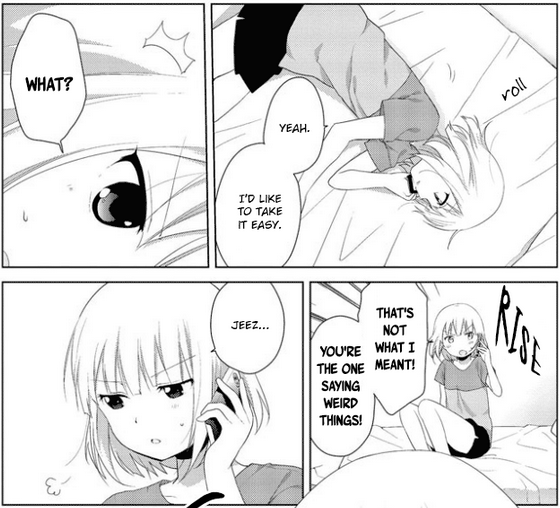 When I originally thought about typing up this post, I initially thought Megumi and Ai were the prime suspects. Nadeshiko is Sakurako’s older sister, after all, so I figured she would be dating someone with whom she teases and gives a hard time (which would parallel the relationship between Sakurako and Himawari). Ai, by coincidence, sort of resembles Hanako and she seems to get along very well with Nadeshiko.

Now, however, I’m convinced that Megumi is just a friend and that Miho could actually be Nadeshiko’s girlfriend due to the nature of the phone calls between Nadeshiko and her lover. Ai remains a strong contender, nonetheless, and is the one I’m betting on.

Sorry for the inconclusive nature of this post, but Oomuroke is still ongoing, apparently, so we’re bound to receive more hints / actually find out the truth later on. I hope it wasn’t too boring.

If you’d like, you could leave your theories concerning Nadeshiko’s girlfriend or your criticisms concerning this post in the comments below. See you next time!

16 thoughts on “Oomuroke – The Greatest Yuri Mystery Ever?”