What is a “Twin Switch?”

It’s when a pair of twins either pretend to be each other or trade places with each other.

A common reason behind this type of switcheroo is because Twin A wants to escape a responsibility or duty by having Twin B do it instead and vice versa. A different scenario involves one twin dying and the surviving twin takes up the dead twin’s name, status, etc. Sometimes the other characters (and the audience) are not even aware that the character is a twin and is pretending to be the dead twin until it is dramatically revealed.

I’ve brought this up before, but I am actually a twin. That’s right, Remy is an onii-chan who popped out 17 minutes before his counterpart.

And from my perspective, the Twin Switch is either a convenient cop-out that works out better in fiction (compared to attempts in real life) or a tragic event that is depressing on several levels.

In order to elaborate on my feelings regarding this topic, I would like to cite what I would consider the most well-done Twin Switch in recent anime/manga history. I’m referring to Ciel Phantomhive from Kuroshitsuji, who isn’t actually Ciel Phantomhive. Instead of calling the main character Ciel, I will opt to call him Fake!Ciel throughout the rest of this post in order to avoid confusion.

This particular blog post goes into a lot more detail, but one of the reasons why I consider this to be the greatest Twin Switch in (recent) anime/manga history is because the author left behind little clues, via careful panel / camera angles and subtle visual cues, to foreshadow the eventual reveal (which happened in chapter 129). It’s been in the making for 11 years.

Not only did she include said hints, but she also made use of unreliable narrators, and made it appear that Fake!Ciel suffered from PTSD, in order to throw off both readers and viewers (mistranslations due to ambiguity and lack of context also probably helped). Such dedication to subtly foreshadow the secret while causing the audience to still be uncertain due to possible (mis)interpretations is a mark of a good author who knows how to play her audience and knows what she’s doing.

The Differences Between Twins

I’ve already mentioned that the author dropped subtle clues to allow readers to guess about the Twin Switch. But say that, for whatever reason, you think it’s all just coincidence. What now?

Well, then I would like to point at one particular panel in the manga. 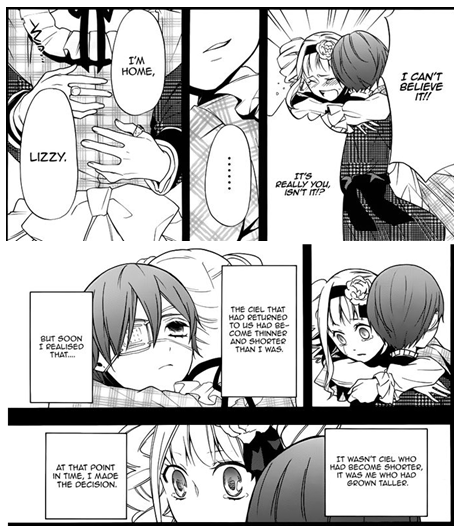 The aforementioned blog post sort of covered this already, but I think this scene is important in several ways.

As a twin, I appreciate what the author is trying to illustrate here. No, I don’t have a cousin who is also my fiance. But I am an inch shorter compared to my twin brother. Always have been. Yet this was something that was never brought up unless we did the annual physical health and fitness tests at school. People simply didn’t notice the small differences that could distinguish me from my brother. But that didn’t change the fact that such differences were there.

What I’m trying to say is that Kuroshitsuji’s author did a great job representing potential differences between twins in this seemingly inconsequential scene. A Twin Switch in another series will often feature two twins who look EXACTLY ALIKE. That kind of uncanny similarity is just not realistic (out of personal experience) and I’m glad she opted to not do that.

A Tragedy for a Forgotten Identity

Yes, Fake!Ciel’s parents died (and the real Ciel apparently died, too). We’re supposed to feel terrible for Fake!Ciel as he seeks revenge.

Yet I feel more awful for Fake!Ciel’s own sense of self.

Fake!Ciel CHOSE to adopt Ciel’s name at the very least. I’m inclined to say that he also “borrowed” Ciel’s personality, as well. And where does that leave Fake!Ciel’s identity?

Well, I believe it’s been squished down. Fake!Ciel doesn’t exist outside of unguarded moments. He’s not allowed to manifest since Fake!Ciel is now “Ciel.”

In the manga-only Green Witch arc, Fake!Ciel breaks down and reverts into a frightened child after he was exposed to mustard gas. After throwing several fits, Fake!Ciel falls into a troubled sleep and experiences a symbolic dream. The readers see two Ciels – one Ciel is confident and acts like the usual Ciel while the other Ciel is more uncertain and nervous. It’s rather telling that the Ciel with the contract seal over his right eye is the confused Ciel.

I personally believe that this dream indicates Fake!Ciel is actually the scared, unsure Ciel who has been acting like his confident dead brother this entire time. To take it one step further, take a look at this picture (which depicts several panels concerning Fake!Ciel’s dream).

In chess, the player who plays as black is often considered to be in the inferior position because white moves first and black often has to respond accordingly (I’m not very good at chess so don’t be too hard on me if I’m wrong, please).

I don’t necessarily agree with this, but a commonly held belief is that size matters. If what I’ve said about Fake!Ciel is true, then he is slightly shorter and thinner than the real Ciel. Coupled with the fact that he has a sickly body and it’s easy to curtly categorize Fake!Ciel as “inferior.”

The color motif is even at play when the two finally meet. Fake!Ciel is wearing all black and has been out in the rain. In comparison to the real Ciel, who is wearing primarily white clothing, Fake!Ciel’s appearance is shoddy and battered. He’s even “missing” an eye because of his contract with Sebastian (since he can’t take off his eyepatch under most circumstances) compared to the real Ciel.

And for the past two years (within the series), Fake!Ciel has been acting as the Queen’s Watchdog and killing off terrible people if need be. Meanwhile, the real Ciel has been primarily killing innocent people as the probable Blue Star figure of the Blue Cult (which has been draining people of their blood for the Blue Star to the point that some people die of blood loss). Could this be considered a case of dark colors not necessarily indicating evil intentions while white and light colors not necessarily presenting innocence? It certainly is a way to paint the two brothers differently using color motifs at the very least. 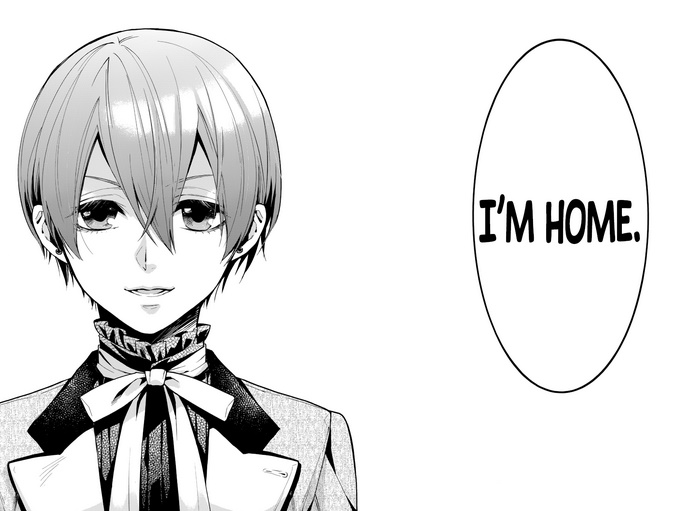 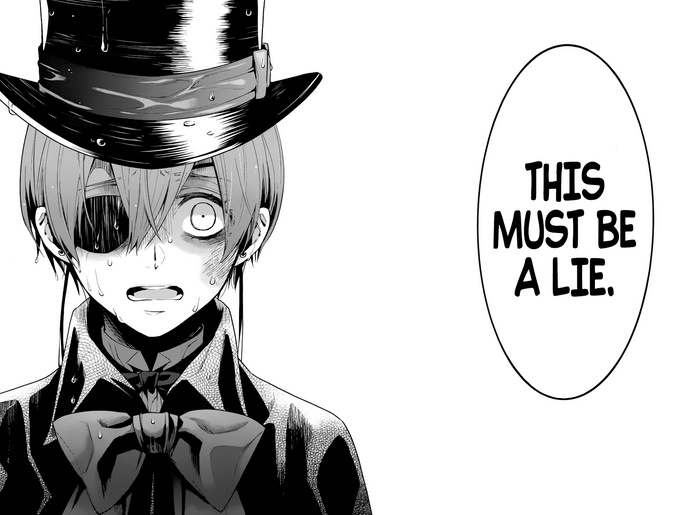 At any rate, Fake!Ciel has been pretending to be the real Ciel for over two years now (within the series). No one has expressed any on-screen regard for the real Ciel’s brother, who is actually Fake!Ciel. I wonder how Fake!Ciel feels about that? That everyone cared more for Ciel than himself? And in order to keep up the masquerade, Fake!Ciel has to continue lying and pretending he’s “Ciel.” The breakdown during the Green Witch arc, and Fake!Ciel’s slip into a frantic mindset that’s more similar to his actual persona, only happened due to stress and shock.

Now, I’m not saying that I’ve ever been in the same situation. But I’ve been lumped in with my brother for over 12 years. From first grade onward and up until highschool graduation, most of my peers and classmates often addressed me and my brother by our last name. They never felt the need to truly learn the differences between him and me. A few noticed said differences, but the majority never did.

I always wanted to be my own person. To achieve that goal, I tried a lot of things that my brother could not or would not do in order to be “different.” Maybe I was just being foolish. But that’s what I honestly felt. I still feel this way at times.

And I really respect the author for making such speculation feasible. Even though he may be a liar, Fake!Ciel is strong for being able to give up his own sense of self in order to maximize his chances for revenge. But perhaps we’ll see more of Fake!Ciel’s doubts spring up as the current arc progresses.

That’s all for now, folks.