The episode in a nutshell:

The episode starts with the usual recap of the previous episode. This one is done by Riko!

Chika and co. are practicing and You is able to analyze their form since she dives. For now I guess You is the dance coordinator.

The three then spot a helicopter, which belongs to the Ohara family. Apparently the new school director is from that elite family. The helicopter then swoops down and stops near the trio. The blonde ojou has made her appearance once again!

After the OP plays, the blonde ojou, Mari, introduces herself. Apparently she is actually the new director! Mari is also a third-year student. It’s a combo. A curry beef bowl combo! Dia then appears. Seems like they knew each other back when they were freshmen. Mari doesn’t hesitate to show Mari some tender loving. In response, Dia tries to give Mari some lip, but Mari ain’t having it. She’s pretty entertaining, that Mari. It’s joke!

As the director, Mari wants Dia to stop cockblocking the School Idol club and offers them a deal. If Chika and her friends can secure a full house at the school gym, Mari will approve of the club right then and there as well as give them a club budget. If they can’t do this, they’ll be forced to disband. Sink or Swim Mari!

They accept, only to realize that the gym won’t get filled even if they get every student to attend. What a pinch.

Chika realizes that she could ask her sister to invite people. All Chika gets for her troubles is her sister writing on her forehead.

Riko also goes to great lengths to not disturb the family dog while she is on her way to the bathroom. Seems like she really respects / fears the doggy.

After deciding to use the town speakers to advertise their concert and to distribute some flyers, the girls go to Numazu Station. You is great at selling the concert while Chika is forced to adopt an aggressive approach.

Riko bumps into undercover YOHANE (her getup sure looks familiar), who takes the flyer and then runs off. You thinks to herself that the girl looks familiar (obviously because she and YOHANE are soulmates destined to be with one another). 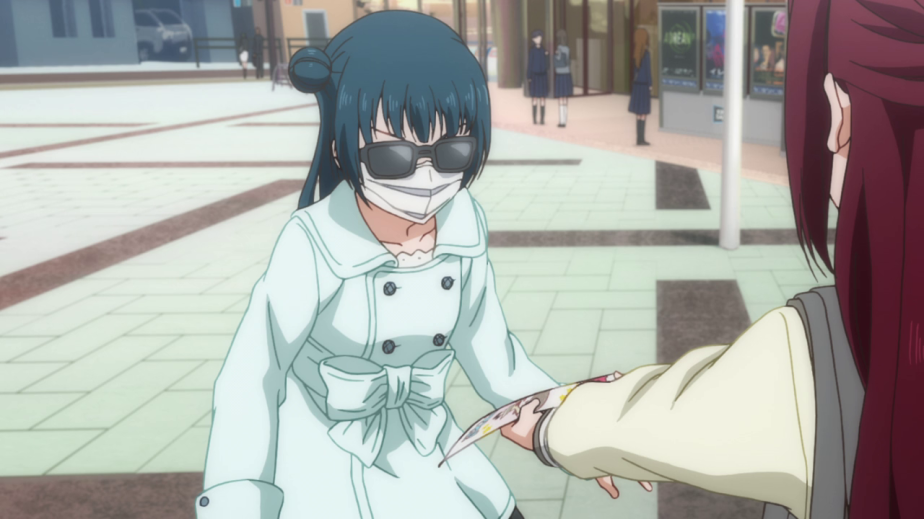 Ruby and Hanamaru are then shown shopping for books. Ruby decides to get an idol magazine while Hanamaru buys a bushel of books!

Chika spots Hanamaru and gives her a flyer. Ruby is interested!

Chika then tries to run off to distribute more flyers, but Ruby asks an important question to which Chika has no answer.

The scene jumps to Chika, Riko, and You stretching while trying to come up with names. They’re really at a loss until they notice that someone else wrote Aqours in the sand. Magic!

The three then do an announcement over the town speakers. Dia seems agitated but Ruby seems enthralled.

The unofficial School Idol club gets back to distributing flyers. Chika asks some classmates to help out.

They work on songs until late. It seems like their heartfelt effort has won over Chika’s ink marker sister. The buses have stopped running, so Chika’s other onee-san drives You home. You’s parents scold her and tell her not to do this again over the phone. I hope this won’t become a problem later on.

After the two talk about Chika, Chika’s onee-san mentions that the concert should go well since the people inside the town are warm-hearted.

Finally the day of the concert is here. It’s raining; definitely not ideal concert weather. The girls psyche themselves up before it begins. The curtain rises… and the school gym isn’t filled. There’s less than a dozen people. Mari and Yoshiko are inside, Hanamaru and Ruby are by the door, and Kanan and Dia watch from outside. It seems like Mari is also aware of Kanan listening to the concert in secret. Perhaps Mari is also acquaintances with Kana, like what I said in episode 1. At any rate, brave Chika steps forward to do the concert.

Tragedy strikes when there’s a power outage midway through the song. Dia walks away as Chika, Riko, and You resolve to continue singing acapella. Ruby and Hanamaru nod and decide to rush into the school gym to show their support instead of lingering by the door.

As Chika begins to cry, the power comes back up because someone started up a portable generator. And then the cavalry arrives! Apparently Chika told the town the wrong time for the concert. The entire town swarms inside the gym. It’s a full house!

The girls continue their song. It turns out Dia was the one who fetched the portable generator. She’s actually a good girl, isn’t she?

The concert ends. Being a realist, Dia reminds the girls that this only worked because they relied on the succeeds of previous idols and because of the town’s good will. To Dia’s surprise, Chika agrees and says that they’ll still push on, that it’s better than standing still and doing nothing. The ED then plays.

Ruby and Hanamaru seem to be sold on the idol train. YOHANE also seems to be into it. Mari looks to be impressed with their efforts (shining eyes don’t lie). Personally, I think Dia will join the club before Kanan. Despite giving Chika a hard time, Dua is a huge idol otaku, she helps the girls to recover during their concert, and she is seemingly amazed at Chika’s resolution. Kanan merely walks away after the concert was over without a trace of emotion on her face. She just gives me the impression of THE FINAL BOSS. Please help out your childhood friends, Kanan!

The title of the next episode is “Their Feelings.” Seems like Chika is going to try to recruit Hanamru and Ruby. See you next week!