Now here’s a show other yuri blogs probably won’t cover. Macross Delta is the latest installment in the Macross franchise, so expect lots of singing, cool space battles, and a lot of missiles. However, there’s also hints of yuri within this particular series.

That’s right, I’m talking about Makina Nakajima and Reina Prowler. The two girls are almost inseperatable from each other. For one thing, they’re always forming the W for Walküre by touching their hands together. Whenever they eat at restaurants, they make sure to sit next to each other, as well. Apparently they live together in a seperate place away from the rest of the crew. Hm… 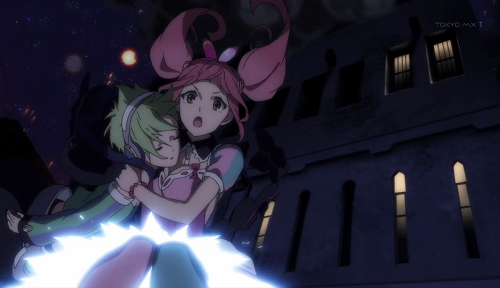 In episode 1, Reina loses her foot (and her consciousness temporarily), which causes Maikna to jump after her and cradle her like a protective (battle) girlfriend. 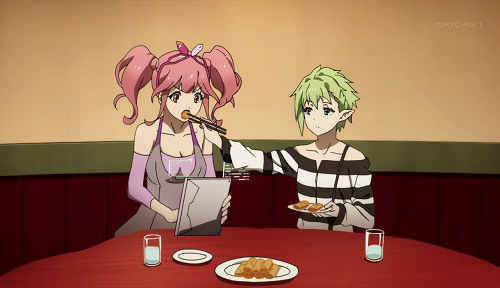 Reina feeds Mika some yummy food in episode 5. Is this really something only friends would do? If so, I need to make more friends. Eating is exhausting, haha. 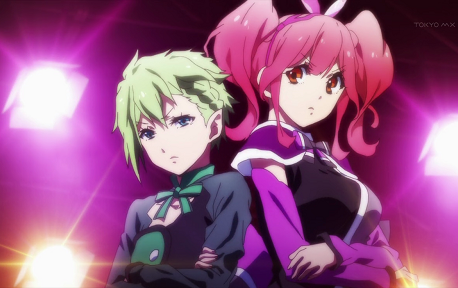 We find out the two used to not get along with each other, but now they’re really close. I’m hoping it was one of those cases where hate blossomed into love.

And then we get them blushing while hugging during the last episode. I left out a few instances of shiptease, don’t worry. Or maybe you should.

Now, should you watch Macross Delta for the yuri? Well, the yuri subtext is definitely there, but I don’t think it’s a compelling reason to sit through a show where the only solution to any conflict is singing; the word, “wind,” is like an infectious verbal tic for anyone involved in the story; and inconsistent characterizations are plentiful (I’m talking about Mikumo and Roid, primarily). The quality of the dialogue in the second half of the series takes a huge nosedive, too.

If I were you, I’d try to give Walküre’s albums a listen and leave it at that. Their songs are amazing! There were certain moments where I’d get pumped up when a song would start up and all, but I don’t think it’s worth sitting through 26 episodes.